I believe you have Greg Davis' stapler.

[Scene: Kirk's bedroom. Saturday morning, 8:00. His alarm clock beeps - he presses a button to silence it and rolls over to go back to sleep.] 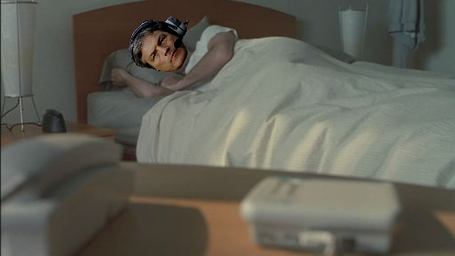 [Cut to later. Kirk is still asleep. The alarm clock now reads 10:30. The phone rings and the answering machine picks up.]

Yeahh hi, it's Gary Barta. It's about ten thirty, and we're all down here at Kinnick. Uh, wondering where you are. *BEEP*

Yeeeah, hi, it's Gary Barta again. I just wanted to make sure you knew that we, uh, did start at the usual time today. 11 AM kickoff. Yeah, it isn't a night game or anything like that.

[Much later. Kirk yawns, stretches, and decides to get up. He notices the blinking light on the answering machine and presses a button]

(Kirk presses button for next message)

(Presses button for next message)

(Presses button for next message, wanders back over to the bed.)

Yeah, uh, hi, it's Gary Barta again. Was away from the phone for a couple minutes, though maybe I'd missed you. Game is tied at 27 and the Huskies are lining up for a field goal. So if you could just get down here to the stadium as soon as possible, that would be greeeat.

(Kirk has curled back up under the covers and gone back to sleep.)

[Greg's cubicle. A large banner asking "IS THIS GOOD FOR THE CONFERENCE?" hangs above the area.] 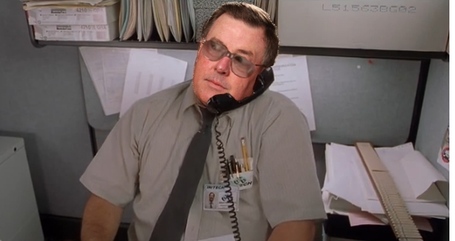 ...I - I don't care if they lay me off either, because I - I told Gary that if he changes the offense one more time, then I'm quitting. I'm going to quit...

...and I told Kirk too because they've changed my offense four times now. And I used to be by the window, and I could see the squirrels, and they were married and I named the brown one Mack...

...but then they switched from the Power-I to a hurry-up offense but I kept my bubble screens because they bring up our completion percentage...

[We cut to another cubicle]

... and I told him that if they take away my bubble screens I'm going to set the stadium on fire. 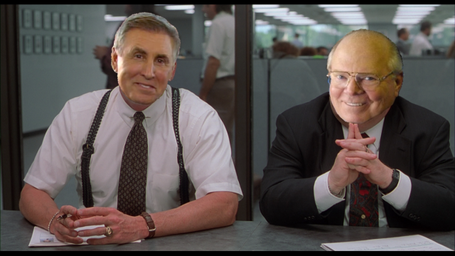 [INT: Conference Room. The two "Efficiency Consultants" are interviewing employees to determine who can be let go. Kirk enters the conference room. ]

A-Ha! All right. We were just talking about you. You must be Kirk Ferentz. I'm Verne and this is my assistant, Gary.

Why don't you grab a seat and join us for a minute?

You see, what we're trying to do here, we're just trying to get a feel for how people spend their day. So, if you would, would you just walk us through a typical day for you?

Well, I generally get here about 15 minutes late. I park out by Carver-Hawkeye Arena, since it's the only place in Iowa City where there are never any vehicles. And then I come in and just space out for awhile.

Yeah, I just stare at my computer. I pull up Facebook and Twitter so it looks like I'm monitoring my players' social media accounts. I do that for about an hour after lunch, too. I'd probably say that in a given week, I probably do about fifteen minutes of actual football coaching.

Uh, Kirk... would you be a good sport and tell us a little more?

Oh, sure. (He smiles.) Let me tell you something about BCS reports...

[Cut to Later. Kirk is even more relaxed. His feet are kicked up on table]

The thing is, Gary, it's not that I'm lazy. Its just that I don't care.

It's a problem of motivation. Now, if I work my ass off and make it to an Orange Bowl or two, my athletic department doesn't see another dime. Bowl payouts are split evenly between everyone at Bigtenitech! And now the Maryland and New Jersey branches, too!

[Gary and Verne sit quietly, stunned by his honesty.]

And let me tell you something else! I have 4 different "rivalry" games right now! So when I have a down year, I have to put up with losing four different trophies out of the trophy case.

That's my only real motivation - not to get hassled by some piss-ant blogger because we lost some focus-grouped corporate-branded cash-grab of a trophy with no historical significance to the rivalry itself.

But you know what? That'll only make a man win enough not to get fired.

Bear with me for a minute.

Believe me, this is veeeery hypothetical. But what if you were offered some kind of performance bonuses or contract buyout clauses?

I don't know. I guess. Listen, I'm gonna go get some gum. It's been really nice talking to you guys.

[He shakes their hands vigorously]

Good Luck with your layoffs. I hope your firings go really well. 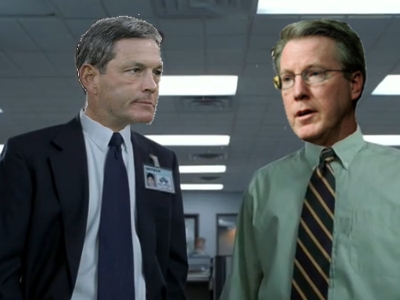 Did you guys hear about Ed?

The guy who got fired for sexual harassment?

No, man. Last week after the Missouri State game, he tries to kill himself by running the car in the garage.

But then his wife comes home, and he decides he wants to live. But get this - as he's pulling out of his driveway, he gets slammed into big time by a drunk driver!

Well? Is he Okay?

Sort of. He broke both his wrists, his legs, tore an ACL, his back. Erb's actually thinking about recruiting him at Tailback.

But check this out - he's going to get a huge settlement out of this! He's having a big party at his place to celebrate! I'm thinking of taking that chick from reception...

Everything goes right, I might be showing her my "O-Face" 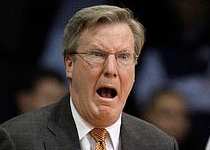 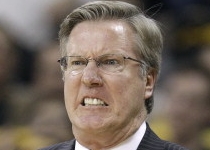 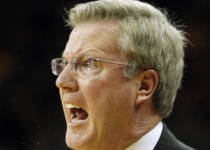 [Kirk walks through the office in full don't-give-a-fuck mode. He decides he's tired of compromising on weak offensive playcalls and walks over and tears all of the bubble screen pages out of the playbook, shredding each one. A mellow, bragadoccio hip-hop song plays over the action:] 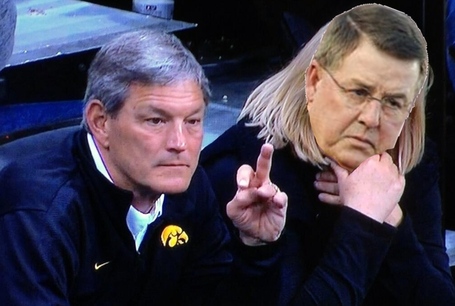 Real Hawks stayed up to watch the Hoops team
When they lost to a date rape creep
Up three-sixty-five a year, 24/7
Because tweakers on meth don't sleep

And all I gotta say to you wannabe, B-1-G,
shit-snackin' pud-whackin' alumni
Is when the Fry dies off, what the fuck you gonna do?
Damn it feels good to be a Hawkeye.

Okay, but that's the last straw.

(Check back Saturday for the final installment. H/T to Intoxcycated for the photoshop assist. Fuck Iowa. Go State.)