Is the Cyclone Offense Disappearing?

Kirk Haaland takes a look at the production of the Big Four Cyclones and breaks down where things have gone wrong in the current three game losing streak.

Share All sharing options for: Is the Cyclone Offense Disappearing?

I was kicking around topics of discussion for a contribution to WRNL with KnowDan the other day when he proposed a solid idea. His idea was to take a look at Iowa State’s Big Four (DeAndre Kane, Dustin Hogue, Melvin Ejim, and Georges Niang) and monitor their production as the season has progressed. Maybe by doing that we would see something to help explain the recent three game skid.

Believe it or not, I tried to keep it simple and even then there is a plethora of data to absorb. I looked at points, offensive rebounding, defensive rebounding, assists and turnovers for each player and graphed them by category. With each stat I used the percentage that the player contributed adjusted for the number of possessions they were on the court. For instance, if Niang scored 20 points in 20 minutes and the Cyclones scored 100 points in a game he would have a points percentage of 40% and not 20%. That is because he only played half the game and could only possibly contribute to the estimated 50 points while he was on the court.

A similar method was used for the other stats. One note on assists is that the assist percentage removes field goals made by the player in question because even the best players don’t get assist on any of their own buckets.

For all graphs, the percentage shown is their season long contributions at the point of the given game. 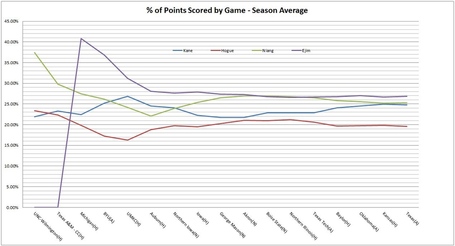 There really isn’t much of a surprise here other than the fact that Niang has declined very slightly since the Boise State game, roughly 27% down to 25%. From the Texas Tech game and beyond, DeAndre Kane has seen a slight bump from 23% to nearly 26%. Ejim and Hogue have largely maintained where they have been for much of the season. There really isn’t anything to derive from this aspect. The most interesting stat to take from this chart is the immediate impact Ejim had on the team when he came back for Michigan. Knee brace and all. 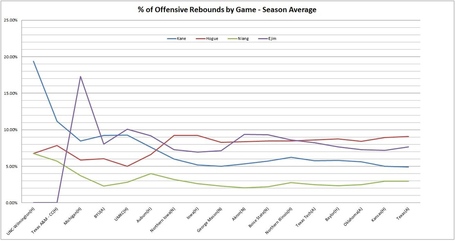 At the offensive end, things have mostly maintained since the start of conference play. Around the Northern Illinois game, Dustin Hogue overtook Ejim as the top offensive rebounder, but Ejim has had a recent spike and begun to narrow that gap.

Also since the Northern Illinois game, Kane has slid back from just over 6% to just under 5%, which isn’t a huge concern. In conference play, Niang has actually bumped up his offensive rebounding percentage and jumped nearly a full percentage point in the last five games. Whether or not this is related to style of play takes a deeper breakdown, but in the early season Kane was playing lower when the bigs would take 3 point shots. With the recent transition defense troubles that has not appeared to be the case. 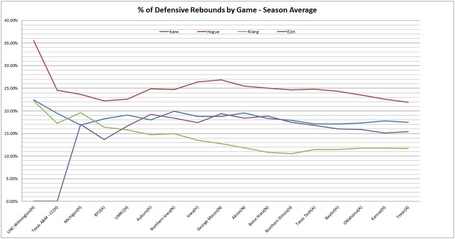 On defense there again isn’t a whole lot to see. Ejim had a recent slide before a more recent spike from the Texas game and Kane and Niang have made slight gains in the past five games.

Perhaps the one area most of note thus far is Dustin Hogue’s slip from 25% for the Texas Tech game down to just under 23% currently. That could be explained by the slight increase in Niang and Kane’s production as well. 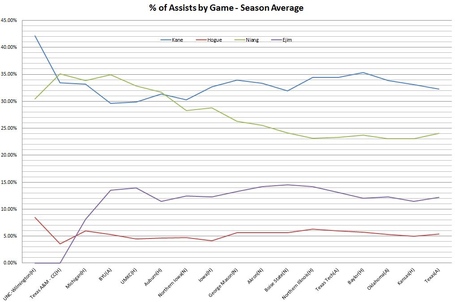 There are two minor yet interesting trends here. While Ejim and Hogue have largely been steady throughout the year there has been some movement from Niang and Kane. Niang has been one of the best creators on the team this year and was very high on assist percentage around the time of the Iowa game. That has slipped since then but simultaneously Kane trended upward, negating Niang’s decline. But over the past couple of games Niang has a small upward trend. That is paired with a slight dropp off from Kane.

Kane has been the leading assist man all year and still is, but since the Baylor game his season average has dropped from just over 35% to just above 32%. A noticeable drop this late in the season. But, three games does not make a trend so we’ll have to watch how that unfolds going forward. 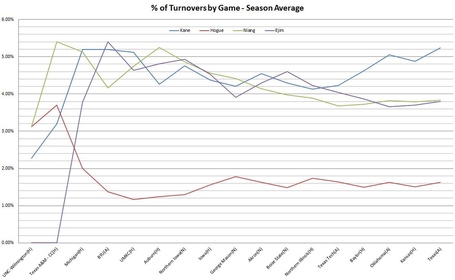 Ranked 5th nationally in KenPom's Turnover % stat, the Cyclones as a whole have done a masterful job not turning the ball over. However, the game in Austin was as bad as it has been all year as the Cyclones turned it over 18 times; five more than their previous high of 13 at BYU and at Oklahoma.

Of the graphs I created for the analysis, this one on turnovers is perhaps the most telling. Kane's turnovers have increased since the start of conference play with a jump from 4% to 5.5%.

While that is worth noting and possibly listing as a concern here’s the biggest thing I noticed; this is the only chart where all four players are headed in the wrong direction at the same time at this date. With rebounds you had Ejim increasing production of late, with assists it was Niang, and scoring wise it was both of them.

Which starts to back up some of what my intuition was telling me; for the first time this year the top four players on ISU’s roster aren’t collectively playing well enough to win. Typically had one had a down game another would step up, or two others. But that turnover chart showing that doesn’t depict the entire performance of those four guys.

Yet, it is very telling for one important reason. Aside from making the shots you can get a sense of how well a team is playing by their turnover numbers. Two of Iowa State’s last three games have been the highest on the season in total turnovers and the four main contributors are playing a role in that.

That jives with what the eyes of many have seen as there has been plenty of discussion about a lack of flow and rhythm lately and not as much ball movement as we have become accustomed to. Since the BYU game there have only been five contests where Iowa State had an assist percentage (total team assists/total team made field goals) of less than 63. One was Northern Iowa, one was Boise State, and the other three were Oklahoma, Kansas, and Texas. It is also worth noting that the Boise State and UNI games were two of the bigger struggles in non-conference play.

The team goes as its best players do like any other team. Turnovers aren’t telling the whole story but it is a bit of evidence that supports what our eyes have seen recently with offensive struggles. It won’t take a whole lot to get back to where they once were. The best news is that they have done it before.