Share All sharing options for: The Weekly Troll: OSU

Unfortunately, we no longer have the bald, shiny, white head of Jeff Woody to destroy your dreams anymore.  We're sorry we had to keep a Big XII team out of the title game, but boy was that fun!  That game has helped spring us to the heights we now sit at today.  So, thanks we really appreciate it!  But we somehow now sit at 1-3 and really need one of them DUBYA's.  To get one of them DUBYA's Iowa State only needs to put it's faith in one thing: 3sus.

"OOOOklahoma where the whites come sweeping out the Natives!"  Funny thing about that, is that this was originally set up as a relocation territory for Native Americans.  You know, the Trail of Tears.  So your states history is off to a good start.  The territory was actually called the Indian Territory for awhile.  But then the white boys moved in with their cows and started calling it Oklahoma.  Which literally means, "red people".  The government then took back land they "gave" to the natives so "Boomer Sooners" (save this for OU) could claim it .  This is called "Indian Giving".  How ironic.  But anyways, the Indian Territory tried to become a state called, "Sequoyah"  but the government wasn't having any of that.  They then forced them to join with "Oklahoma" (white people) so they could then finally become a state.  Huh.

Also, both of your major state schools have mascots that signify the oppressor.  I'm not saying you should change your name to, "Red People" or something, but come on white people.  It's just RUDE.  Oh, how 3sus does not approve of this state.

Ever since I was a young lad, I always wondered why something was called something.  Usually it's rooted in some Latin word, but sometimes that something is not old/smart enough to have come from Latin.  This is how many "Western" towns got their names.  Someone just showed up somewhere and said, "I proclaim this land, Something."  And unfortunately for you, these guys weren't the most creative.  The first thing they notice becomes the name.  Still water.  Hence, Stillwater.  That's like if someone stumbled upon Ames and proclaimed the land, "Awesome" or "The Tits".   And by the way, Stillwater doesn't even sound good.  When I think of still water all that I can think of is gross, diseased, sick water.  3sus only blesses his disciples with non-gross, diseased, sick water.  That's two strikes 'Pokes.  3sus may soon begin smiting.

Here, stands your shrine to money.  It, and many other facilities, were given to you by oil man T. Boone Pickens.  He just gave you the "largest single donation for athletics to an institution of higher education in American history".  And ever since then your program(s) has had a major uptick in production.  Huh.  Seems to me that money buys success.  But not players! But like I said at the beginning, we really need a DUBYA or two.  So, I say here today, that Iowa State should go out and find itself a super rich, old guy sponsor!  I think we should shoot for the stars here.  Let's go get WARREN BUFFET.  He's only over in Omaha.  I know he went to Nebraska back in the day, but let's just send Freddy Dream over there so he can tell him, "I turned down Nebraska for ISU once and LOOK AT ME."  HE'LL GIVE US ALL THE FREE MONEY AND ATHLETIC RELEVANCE.

Also, your "Paddle People" aren't cool.  Or intimidating.  Or cool.  Usually people only say, "Thank you sir, may I have another" in the comfort of their own torture chamber.  You people must be pretty free spirited - like this guy. 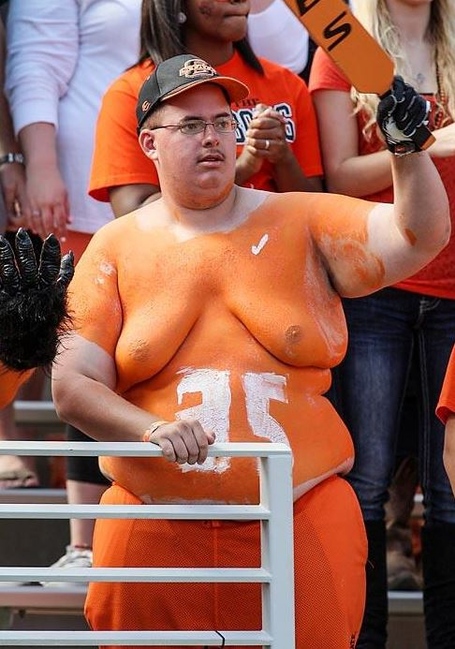 As I briefly mentioned before, you decided to use the people, Cowboys, who wanted to take the land from Native Americans, for which is the reason your state was created in the first place.  Just a bunch of "Indian Giving".  Change your name to the Aggies or something.  Oh, wait you already changed it from that once.  You were also once the Tigers, which you admittedly stole from Princeton.  And your colors?  You stole that from Princeton, too.  Want to know how you settled on Cowboys?  You saw a guy at a SHEEP PARADE.  You guys just saw some dude walking with some sheep and were like, BINGO.  He wasn't just inspiration for a new mascot, YOU ACTUALLY MADE HIM THE MASCOT. And then when he was done, you just drew his face on a head and now you wear it at sporting events.  You are now even creepier than before.  Strike 3sus.

When I say, "Da Bomb" I don't really mean like when you said it in the 90's and it meant cool.  I mean it in the sense that when you played BLITZ on N64 there were some people who only ran the play, "Da Bomb".  If you somehow don't know what "Da Bomb" is, well I pity you.  But it's just where everyone goes deep.  And if you were smart you knew how to defend it (P.I.), and you would eviscerate your opponent because that's all they knew how to do.  And vice versa.  So lets say "Da Bomb" is working for you.  You will score a lot of points.  How do the Cyclones counter?  3sus of course.  You have angered 3sus, and He must now have his vengeance (again).  He will come in and kick long-ass field goals the entire game (He only works in 3's).  And as time expires in regulation, He will kick a 69 yard 3 to send it to OT where the Cyclones win 66-63.  Praise 3sus. 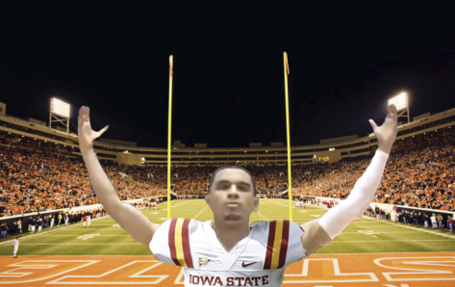 Being the architect of "Da Bomb", Mike must now go down with the ship since 3sus has slayed him.  From what will rise from the ashes we do not know.  But hopefully, it resembles something like this...

If you have any other perfectly logical reasons for why we are better than Okie State, don't hesitate to share.