NUMBER 7! Iowa State's win over Texas made it seven wins this year over ranked teams.

POSTGAME REACTION. Fred Hoiberg and the players talk about a gritty but convincing win over Texas.

LET'S TALK ABOUT ALL THE HOIBERGS. Paige Hoiberg was shown on ESPN, which somehow led to this weird but funny exchange. 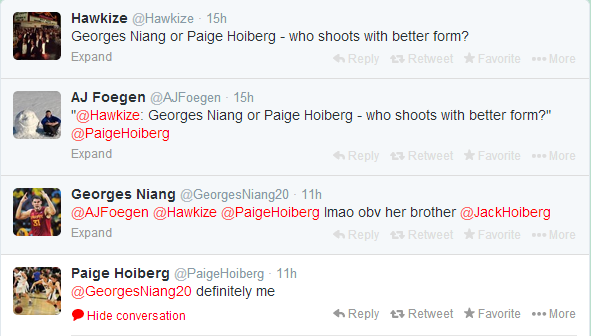 As for the aforementioned Jack Hoiberg? As it turns out, he does shoot pretty well.

Gilbert freshman Jack Hoiberg (yup) went for 27 in a 77-73 win over Bondurant-Farrar tonight.

NEW DB COACH. Maurice Linguist has been hired away from Buffalo, and UB Bull Run has some insight on the man.

BOBBY YELLS AT THE STUDENTS. Bobby La Gesse is unhappy with the dwindling attendance from the students.

BIG IMPACT FOR LAZARD? Brandon Chatmon picks Allen Lazard as the freshman who will have the greatest impact in the Big 12 in 2014.

BACK IN AMES. Some former Cyclones are back in Ames during the NFL offseason to work out.

RECRUITING DOWN IN THE BIG 12. Blue chip recruiting is down in the Big 12, which might be good for Iowa State.

THE DEFENSE AGAINST KISS CAM. I guess this guy is well prepared?

ROBOT VS. HUMAN. A robot is going to challenge a ping pong champion. For real.

COMMUNISM IS ALIVE AND WELL IN AMERICA. At least according to one jilted student.