Begone, child. You know not the power of the demon you face.

Share All sharing options for: The Exorcism of Gallagher-Iba

Scene: Gallagher-Iba Arena. Father Hoiberg and his allies in the holy spirit emerge from the bowels of the ancient complex into a gaudy orange hellish nightmare parody of a basketball court.

Be cautious in this place. It may look deserted, but those few who remain will likely be in thrall to the monster we seek.

Yeah, that's great. When do I get to fight Smart?

Soon, my son. But you must not seek confrontation - to fight him is to bring your own destruction. Even the slightest of touches and he may turn you to stone.

Don't worry. I got this.

Especially important is the warning to avoid conversations with the demon. He is a liar.  He will lie to confuse us. But he will also mix lies with the truth to attack us.

The attack is psychological, DeAndre, and powerful. So don't listen to him. Remember that - do not listen... 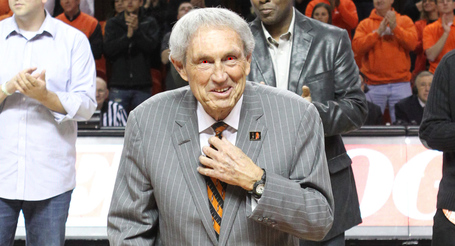 He speaketh with an unnaturally large voice for a man so small.

Look, first, quit talking like that. You sound like an asshole. That "Three-sus" nickname really went to your head.

And second, that's clearly the demon speaking through the pickled remains of Eddie Sutton. It's inhabiting Eddie against his will and using the natural resonance of the empty arena to amplify his voice.

HOW CAN YOU POSSESS SUCH KNOWLEDGE

Haven't you heard? I was roommates Nerlens Noel at the Tilton Academy. Incidentally, he was a HUGE horror movie geek.

MY POWER IS GROWING. IF YOU HAVE SUCH WISDOM YOU KNOW CANNOT FIGHT THIS WITHOUT A YOUNG PRIEST AND AN OLD PRIEST THAT PART WAS IN BOTH MOVIES

You fool. I am both.

EVEN THE CRAPPY REMAKE AND... WAIT... YOU LOOK FAMILIAR

NO THIS CANNOT BE 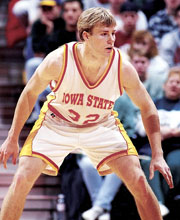 I have returned after many years, foul demon. I have bided my time, amassing a coalition of holy warriors from across the land. And tonight, I shall end your reign of terror once and for all.

LETS DO THIS SHIT FLOPPY BIRD

Good thing you destroyed him. Poor kid would have gone broke next year in the NBA.

NOW! THE BEAST IS VULNERABLE! ATTACK!

It would be my pleasure. WHO IS THE OLD MAN NOW?

(Niang Charges in, but the demon-possessed coach strikes him down before the end of regulation with a blast of deadly lightning from his fingertips that looks just different enough from the end of Return of the Jedi that we avoid a copyright claim from Lucasfilm.)

I'LL DESTROY YOU YOU SON OF A BITCH

/Lobs Wooden Stake to Ejim at the end of regulation 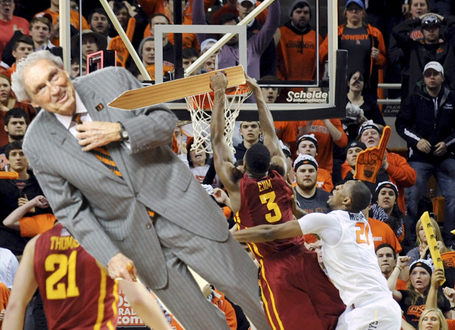 YOU ARE 0.2 SECONDS TOO LATE

Do not listen! He is full of lies! ...Except the reading thing. That's pretty solid advice. People should read more.

AND YOU, SON OF NAZARETH. I HAVE SEEN YOUR SOUL, AND YOU ARE MIRED IN SELF-DOUBT BECAUSE YOUR GOD HAS FORSAKEN YOU

Yeah, but I did replace the Tonic in your bar with Holy Water. You're drinking a Gin and Jesus right now.

/Starts to emit smoke from the nose and mouth

/Demon Eddie explodes into a fine red mist of atoms

BEGONE FROM THIS PLACE FOUL DEMON

Come, let us be gone from this place as well. I wish to return to Ames and inform them of what has transpired here tonight