Choose Your Adventure With The 2013-14 Cyclones

Looking back at the major storylines of Iowa State's 2013-14 season.

Share All sharing options for: Choose Your Adventure With The 2013-14 Cyclones

Instead of the unbelievably creepy "Choose Your Adventure at Iowa State" commercials (WHY DO THEY HAVE TO WHISPER?!), maybe Iowa State University should use the story of the 2013-14 men's basketball team to increase enrollment. There wasn't much this year that fans didn't get to experience; from the thrilling highs of a 14-0 start and winning the Big 12 tournament to the crippling lows of giving up triple digits to an eventual NIT team and the untimely injury to Georges Niang, this year's edition of The Fighting Hoibergs had just about everything to keep fans interested in their team.

An End To "Iowa State-ing It Away"

If you've been a Cyclone fan for any length of time you know to always prepare yourself for the letdown. Even when the team is up 20 with a minute left, you're still wondering how the team will "Iowa State it away." This year's team changed the entire culture that we've known. Thanks to the unwavering confidence of this year's crop of Cyclone players, the ratio of games that the team pulled out far outpaces the number that they gave away. For maybe the first time ever, Iowa State fans' narratives turned from "waiting to see how they screw up this 10 point lead" to "only a matter of time until ISU overcomes this 10 point deficit", which might be almost as amazing as Fred Hoiberg's dreaminess. 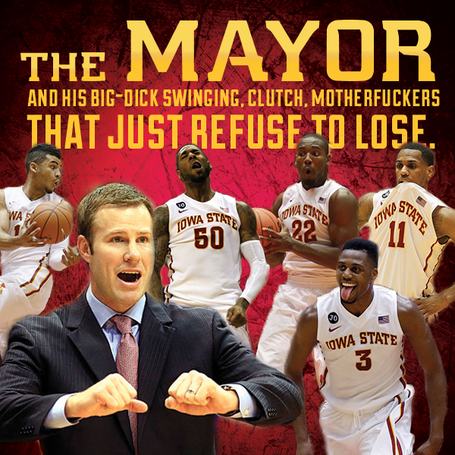 Georges Does His Thing

When you need a bucket in crunch time, call an iso play for Niang, because he's going to succeed most of the time. The closer for the Cyclones established his late game dominance during Iowa State's 14-0 run to open the season and never looked back. Sadly, his season ended with a broken foot in Iowa State's NCAA tournament opener and left many to wonder about how much more magical the 2013-14 season could have been had he not been injured.

Iowa State fans had high hopes for last year's Mr. Basketball from Michigan, but Monte Morris exceeded our wildest expectations with his decision making while setting the all-time season assist-turnover ratio record at 4.78, shattering the previous 3.96 record. Monte's passing prowess was highlighted by this beautiful pass against NC Central.

Monte's offense has also come a long way as well, with his 3 point shooting being the most notable improvement during the course of his freshman season. It's not hard to imagine Monte being an all-conference performer by the end of his career at Iowa State.

The Birth of 3sus

Naz Long spent his freshman year looking like he had lots of potential during the soft non-conference schedule, but saw his minutes dwindle down to just about nothing by the time the heart of the Big 12 schedule hit and was mostly an afterthought to begin the 2013-14 campaign. But after hitting eight 3s in an early season demolition of UNC-Wilmington, the 3sus of Nazareth nickname was born. What started as a catchy nickname for a guy having the game of his life against a tune-up opponent turned into something more prophetic, as Long overcame an uninspiring start to conference play by evolving into the Cyclones' late game marksman/savior.

3sus was instrumental in dramatic finishes to both wins over Oklahoma State in the regular season, continued his hot shooting in the Big 12 tournament, and outdid himself in the NCAA come-from-behind win over North Carolina. Until 3sus rises again next basketball season, we're left with this fantastic image of him, red backboard halo in perfect view. 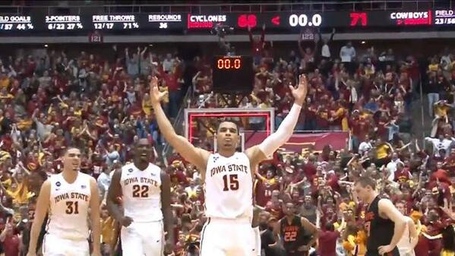 Dustin Hogue started the season as Iowa State's "most nominal" starter, with the consensus that he was only starting due to the lack of size on the team. Hogue spent most of the year in Melvin Ejim's previous role as "glue guy", and even outdid Ejim on the boards, but his game rose as the stakes rose. His averages jumped to 17.7 points (on 67.2% shooting) and  7.3 rebounds in Iowa State's six postseason games. The pinnacle of Hogue's game came in a bittersweet moment, as he put up a career high 34 points at home in New York City in the loss to Connecticut. Please keep your wonderfully self-serving MSG haircut when you show up to Hilton next year if it results in more performances like that, Dustin (seriously).

Ejim toiled as the thankless sidekick for his first three years, doing the little things to help the team win, but seemingly never getting the credit he deserved. He entered the 2013-14 as "the man" for Iowa State, but was immediately sidelined for four to six weeks with an MCL sprain. Whatever the Iowa State training staff did during his recovery needs recognition of its own, as Melvin returned in just three weeks to a packed house when defending national runner-ups Michigan came to visit Hilton. Ejim dominated the glass and the paint rolling up 22 points and 9 rebounds while outshining preseason first team All-American Mitch McGary.

The momentum continued to roll through the season, with a 48 point outburst against TCU headlining an impressive year in which the Canadian won Big 12 Player of The Year over likely lottery picks Joel Embiid and Andrew Wiggins. His career certainly didn't end the way that ISU fans or Ejim would have liked (a poor-shooting, single digit point output against UConn), but Melvin will leave Ames as a model student-athlete that Cyclone fans will remember decades later.

Fred's Most Successful Reclamation Project Yet

Fred Hoiberg turned Royce White and Will Clyburn into big time performers, but DeAndre Kane might have been the riskiest project yet. Royce had issues with the law, but Kane spent 3 years at Marshall earning a reputation of being a difficult teammate and disrespectful to fans. After he signed with Fred Hoiberg's squad, he took out a full page ad thanking Marshall fans, in what looked to be the first chapter of the new DeAndre Kane.

I know that things didn't end here the way I wanted them too and I apologize for not leading the team to the NCAA Tournament because this city deserves it. What I do promise though is to bring something back to this community better than a basketball championship - hope and fun for the kids. Whether I play pro basketball or just become a business man, I'll continue to contribute to the youth in this area once I get my career.

Thanks to Marshall University and the Athletic Department for giving me my first college opportunity. Thanks to the coaching staff that helped me through the years develop as a player and thank you to all of my teammates. I wish my brothers good luck next season and hope they can bring the C-USA title home.

As it turns out, there's a distinct possibility DeAndre may have just been misunderstood due to his possession of a quality that was toxic at Marshall, but extremely lovable in Ames: He absolutely hates to lose. The third straight Big 12 Newcomer of the Year that Fred Hoiberg has produced may have also been the most impressive, carrying Iowa State when they've needed it the most. We saw the fulfillment of his potential as a 6 foot 4 point guard during the early season top 10 match up at Hilton against Baylor, putting up 30 points, 9 assists, 8 rebounds, and 5 steals in a 15 point beating of the Bears, and he didn't cool down much over the year. When Niang went down with only one day to prepare for UNC without him, Kane put the team on his back, making play after play to keep the shorthanded Cyclones in the game, and ending the Tar Heels' season with this acrobatic layup.

Perhaps the most impressive thing about DeAndre's one year stint in Ames is that once again, a "troubled" transfer stayed out of trouble, with his accidental eye poke of BYU's Eric Mika the sole transgression that even the most ardent Kane hater can point to as a negative during his time in cardinal and gold.

The Future Is Bright

With the "what could have been" feeling permeating this Sweet Sixteen run due to Niang's injury, many might see this adventure end with a less than satisfactory ending (Mr. Narber is quite OK with this). While this year has been a hell of a ride to be a part of there's much more to add the tale with Fred Hoiberg at the helm. Hogue is back next year, Niang and Long both have two years left, plus Matt Thomas and Monte Morris have three more years as Cyclones.

Added to the mix are transfers Jameel McKay and Abdel Nader, who are both eligible next year as juniors, while top 100 recruit Clayton Custer joins the Cyclones out of high school. As the NCAA tournament approaches its final weekend, transfer season is just around the corner, a market in which Mayor McDreamy is always active in, so you can count on at least one graduate transfer committing to the Cyclones this spring. Even as you lament the NCAA Tournament loss, remember that this adventure is unfinished... you'll just have to wait for the next chapter.