Tuesday night brings the final road game of the season for Iowa State. The Cyclones head to Waco to take on a Baylor team that's won five of their last six games and is playing for their NCAA tournament life. Prior to last season's 87-82 win in the Ferrell Center, Iowa State had been 1-7 at Baylor since the Big 12 formed, including six straight losses (only win was in 2000 as Iowa State celebrated a Big 12 regular season championship).

This game is eerily similar to last season's contest in that the Bears were fighting to stay on the right side of the bubble while Iowa State was in need of a quality road win to put on its tournament resume. This will be the first of two such games this week for the Cyclones, featuring opponents in potential must-win games with a home game against Oklahoma State to follow this coming Saturday.

It's almost hard to fathom that when these two teams met earlier in the year, Baylor was ranked #7 while Iowa State came into the match up as the #9 team in the country. The Cyclones prevailed (as they have every single time they've ever played Baylor in Hilton Coliseum) by a final score of 87-72. Iowa State was dominant in the second half and DeAndre Kane put up a ridiculous state line of 30 points, 8 rebounds and 9 assists.

That game marked the beginning of a fall for Baylor as the Bears went on to lose seven of their next nine games prior to righting the ship in recent weeks. Baylor was in Joe Lunardi's most recent Bracketology as an 11-seed and a win over the #16 Cyclones would go a long way in cementing a bid for Scott Drew's team.

Breaking Down the Bears

When talking about Baylor, the conversation begins and ends with Scott Drew. A dynamic recruiter and alleged miracle worker, Drew brought Baylor from the depths of one of the worst scandals in sports history to multiple Elite Eights. An enigma of sorts, he is his own worst enemy. Both charismatic and confounding, Scott Drew is simply one of a kind, which is to said in both the best and worst possible way.

WRNL contributor CyssorMeTimbers provides a unique glimpse into the keys to success, as authored by Scott Drew himself at one of his annual coaching clinics:

A. Trustfalls - If someone hits the deck in practice, berate them for their clumsiness and stupidity (this totally works)

B. Brotherhood - We're all one big underachieving family here.

C. Motivation - Fear and hunger are the greatest of motivators. Take away a player's campus meal cards and you'll scare the piss out of them (this is when learning can happen).

D. Trust - Trust that I always know what I'm doing. Whose coffee mug says, "World's Best Coach" on it; yours or mine? 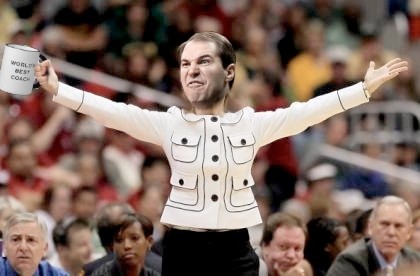 B. The Five D's - Hide your past failings and underachievements by sticking to the five D's: Deny, Deflect, Discredit, Deny and Dental Floss (a great smile is always better than the truth).

C. Linguistics - Use words like "synergy" and "fusion" as much as possible when referring to your coaching style, even if you don't really know what they mean.

A. Film Study - Mighty Ducks 1, 2, and 3 are the coaching Quran to live your life by. Praise be to Gordan "Allah" Bombay

B. Confidence - Suit up. Credibility on the sidelines starts with a nice suit and the nicest of suits are always at Sears.

C. Respect - Remind your players that you know what you're talking about. Seriously. Just keep saying it. If they question you, say it louder.

D. Intimidation - If your playing style isn't physically imposing, then your highlighter uniforms better be.

E. Scouting - The opponent is irrelevant. Change your game plan for no one.

A. Dry Erase Board - A sharpie shows you mean business. No erasing!

B. Working the officials - Heckling is the best way to get in the head of the stripes.

C. Timeouts - Effective use is crucial. If your team is running away with it, TIMEOUT (don't want them getting too tired). On the contrary, if the other team is scoring at will, save those TOs. They'll miss eventually. If the TV timeout is 15 seconds away, TIMEOUT (two for one deal). How about if there's 13 minutes left in the game? Better use those suckers (use 'em or lose 'em amiright?).

D. Set Plays - These are for chumps and middle schoolers.

E. Scolding - The only way a player learns is by getting screamed at. 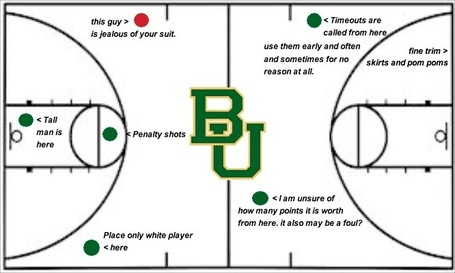 A. The Five D's - Make them your ace in the hole

B. The McRib Defense - Reporters can ask some tough questions. Sometimes you just gotta turn the tables on them, though. They want to know why we didn't get the ball more to Cory Jefferson in the post, so I hit 'em up with a "why does the McRib only come around twice a year?"

C. The Sneak Timeout - Is the heat getting a little too hot? Call a TIMEOUT. Excuse yourself from the press conference, promising you'll be right back, only to never return.

If you follow the above outline throughout your coaching career, underachievement and under-utilization of talent are goals that are most certainly attainable to you. I, Scott Drew, invite you to look at the evidence of this proven system annually illustrated in the Big XII conference standings.

And the Winner Is...

Baylor does three things well. They crash the offensive glass, shoot threes and block shots. That's it. It's hard to find another redeeming quality about this team, but because they excel in those areas of the game, they've been able to string together some wins of late.

Cory Jefferson is woefully underused inside and Isaiah Austin is a drifting blur of basketball ambiguity. The duo, thought to be among the best front courts in college basketball entering the season, has failed to live up to the expectations. In the earlier match up in Ames, they did team up to grab a combined 22 rebounds, but only scored 17 points on only 15 shots. That simply isn't enough scoring opportunities for a pair that talented.

Stopping Jefferson and Austin will be crucial, but just as important is limiting the outside touches for Brady Heslip and Gary Franklin. The seniors combined to hit 8-14 three pointers back in January and notched a combined 30 points between the two of them. Accounting for the dribble penetration of Kenny Chery will also be a major key defensively.

For Iowa State, Melvin Ejim and DeAndre Kane played exceptionally well at Kansas State on Saturday, but if the Cyclones are going to avoid a second straight road loss, Georges Niang has to return to form and make an impact Tuesday night.

Similarly, the Cyclones can ill afford to rely so heavily on the scoring efforts of Ejim and Kane again. Iowa State is at its best when there's balanced scoring and all five guys on the floor are a threat to score. That simply wasn't happening on Saturday in Manhattan and the inability of to get a third guy in double digits ultimately resulted in Iowa State's downfall.

Baylor is desperate and needs this win, but Iowa State is also playing for something at this point. With Kansas State's loss at Oklahoma State on Monday night, one of the four teams tied for second place in the conference fell a half game back. A runner up finish is still in play, but the Cyclones have to take care of business this week and it all starts with winning in Waco.

Fred Hoiberg is 5-1 against Baylor since taking the Iowa State job and a big reason for that is because he's been able to successfully attack Baylor's zone while neutralizing the Bears' length. I expect Iowa State to get Baylor's best shot, but I question whether Baylor's best shot is good enough.

I say it isn't and I think the Cyclones pick up a quality road win tonight.

TV: ESPN2 with Dave Flemming and Miles Simon on the call

Radio: The action can be heard via the Cyclone Radio Network