Oh, this is happening.

Well boys and girls (yes, it amazes me as well that there's multiple females that post here), the offseason is upon us, so we're opening up a mailbag. You can ask questions whenever you like by emailing us at widerightnattylite AT gmail DOT com or by using the #WRNLMailbag hashtag on Twitter. Sadly, one of the best questions I could have answered (Keurig is the devil) has already been addressed by MMD comments, but we'll try to soldier on and answer some questions anyway.

Is Brett Medders this years Justin Coleman? he wasnt expected to have much of a role on the team but he seems to be the guy that works hard and gives 100 percent on every play. i feel like this Medders is just a bigger Coleman. from what ive read he was diving for balls in the spring game and wasnt dropping anything just like Coleman did all last season. does he have potential to be better than Coleman? and if he plays well does Lazard redshirt?

It's pretty early to tell, but Brett Medders' early rave reviews do indicate that he's on track to become an X factor in Iowa State's offense. Besides being the most hipster looking wide receiver since... forever, Medders also has family history (Lyndsey Medders) of Cyclone greatness on his side.

There has to be a quota met of one white wide receiver being oddly productive at Iowa State each year, so unless Jake Rhoads (yes, son of Paul) decides to take a Mangino-sized leap as a redshirt freshman, that role seems like it's Medders' to lose. To argue for Rhoads, the pattern seems to favor names that start with J; Jake Williams, Josh Lenz, Justin Coleman, so maybe junior Rhoads will be the 2013-14 white knight of the receiving corps after all.

@WideRtNattyLt Will Hickory Park recover from the recent Mangino raid?

Can anyone ever truly recover from a Mangino raid? I'm still not quite recovered from the Mangino raid of Ames in 2008 in which midget Todd Reesing embarrassed us. I assume you're talking about the missing pounds of BBQ (or whatever Hickory Park meat is categorized as), so yes, I imagine that Hickory Park has no problems recovering from a Mangino meal. They bring in school bus upon school bus of children that have never had real barbecue, and therefore gorge themselves on the semi-BBQ that Hickory Park provides. Surely Mark Mangino can't out-eat a hundred children, can he?

What is truly difficult to recover from is the nightmare fuel that Coach Mangino brought upon us on Easter Sunday. 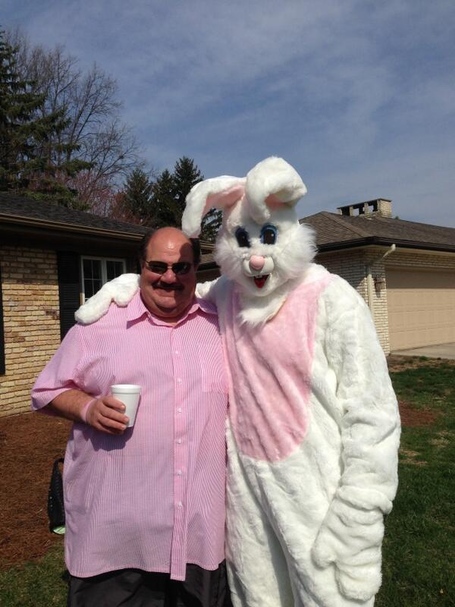 @WideRtNattyLt What's up with @RobStandard? Is he our next @jwoody32? Are "Standard yardage" jokes in our future? #WRNLMailbag

Rob Standard has seemingly had his Game Genie taken away from him after putting up video game numbers in setting rushing records in St. Louis, and has been mostly wasting away on the bench for three years. The bad news for Standard is that while he appears to be talented, he plays a position that is an anomaly in Ames: well stocked (cue Iowa basketball #depth joke).

After sitting behind the ripe with porn reference White-Johnson-Woody trio for two years, he still couldn't catch a break last year when the trio were relatively ineffective due to the presence of Aaron Wimberly and DeVondrick Nealy. Now that Woody is gone, and the diminutive duo of Wimberly (174 lbs) and Nealy (190 lbs) ahead of him on the depth chart, Standard has added 28 pounds to his 185 pound high school frame, making him 5'10, 213. While this is still a far cry from Jeff Woody's 243, by somehow being the largest running back on the roster, he probably does inherit a bunch of goal line carries.

Then again, QB Joel Lanning is 236 pounds and seems unlikely to win the starting QB job, so maybe he becomes the Lan-Dozer and we eschew a goal line back completely.

#WRNLMailbag What is the quintessential "Iowa" meal?

It goes without saying that corn and pork must factor in heavily. This seems to indicate that a meal consisting of a pork chop and corn is the correct answer, but I'll one up that with some specifics. The quintessential "Iowa" meal is a giant, award winning pork tenderloin from River Rock Cafe in Mount Pleasant smothered with jalapeno cream corn from Jethro's BBQ, on a bun made from Great Plains pizza dough, accompanied by a glass of Templeton Rye Whiskey.

This combination could be completely disgusting/inedible, but hey, it sounds good in theory.

@WideRtNattyLt Is there any job that Fred Hoiberg wouldn't be good at? #WRNLMailbag

The sad thing is that thanks to 3sus and in turn, the victory over North Carolina in the NCAA tournament, we already know that Fred wouldn't make for the greatest dance instructor in the world, though I'll argue til I get mouth rhabdo that his admittedly awkward moves look far less awkward when there's audible music in the background. So I guess even dancing I think he'd eventually be great at.

Really, there's only one thing (other than being undreamy) that I think Fred would be bad at: being any superhero who hides their real identity. Let's take Batman for example... sure, thanks to Jamie Pollard making it rain, Hoiberg probably has the money to have Doc Sadler invent sweet new gadgets for him, but anytime he gets near a group of women, no disguise is going to mask the distinctive dreaminess emanating off him. And there you go, disguise blown.

@WideRtNattyLt best booze to drown defeat in? or what is the best coping mechanism for a loss #WRNLMailbag

This is a great question as we're 4 months away from what appears could be a horrific season coming up. Paul Rhoads isn't even sure what's happening with his linebackers, and there's players disappearing off the roster randomly (if you can count being part of a VEISHEA riot random).

Other than setting your expectations so low you can't possibly be disappointed, booze is always the best method. After a trip I made to Stillwater to watch J.W. Walsh destroy the Cyclones on like. a quarter of a knee, I discovered that along with zero expectations, a Limey is the perfect way to cope. It's a devastating drink created by the Copper Penny in Stillwater that you don't taste until you've blacked out and forgotten all about how much losing sucks.

Approximate recipe:
Fill 32 oz cup halfway with ice
Fill cup halfway with vodka (use the crappiest vodka you can find, or you won't taste anything and you'll die)
4 oz of triple sec
3 oz of sweetened lime juice
Fill to top with Sprite

Now go and enjoy your blackout.