It's only taken 40 years but the south end zone expansion is finally happening, and here's proof!

Back in November Jamie Pollard and Paul Rhoads announced the next step in Cyclone Football: a bowled in south end zone.  A $25 million gift from Roy and Bobbi Reiman was announced as the required funding to not only expand the end zone, but "create a stunning entrance to our campus" according to Pollard.  The Regents approved the project in February, and today the project took another step forward with the public release of the renderings.

Here's a quick refresher on the 2008 renderings of the south end zone expansion: 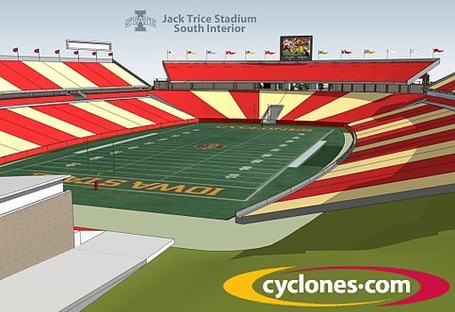 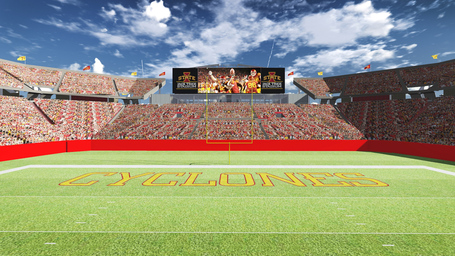 The scoreboard and club section jumps out immediately.  According to the release:

The initial phase of the renovation will close in the south end zone at the stadium with a permanent upper and lower seating bowl. That structure will house a new two-story premium club space, include an additional HD-quality video board / sound system and connect the east and west concourses. Stadium capacity will exceed 61,000 upon completion of the project in August, 2015.

Knowing that tickets will partially pay for the debt service the athletics department has already started marketing the End Zone Club.  Prices aren't outrageous and the viewing experience should be the same as watching at home with comfortable chairs and a big screen 100 yards away, but instead you have 61,000 of your closest friends to experience it with.

This initial phase is slated to be completed in time for the 2015 football season but there are currently no specifics on impacts to parking and the enhanced green space the Reimans requested with their gift.  If rumors are true (and the SW view is accurate) then lots S1-S4 may very well be ripped up in favor of a return to mother nature.  If it happens expect to see parking in the current intramural fields on the east side of Elwood Drive University Boulevard.

For now though, let's all sit back and enjoy the pretty, pretty pictures in front of us.