Because you're a communist if you don't pretend to care about soccer for at least the next couple of weeks.

The world's biggest sporting event is upon us (No, Olympics, I love you, but until you cut ridiculous stuff like dressage and racewalking, you don't get the top spot) and hey, the good ol' United States of America is involved! Instead of working today, why not read a bunch of previews before the host and heavy tournament favorites Brazil and Croatia start off the spectacle at 3 P.M. Central? Landon Donovan doesn't have anything better to do either!

The most useful World Cup schedule from Wait But Why 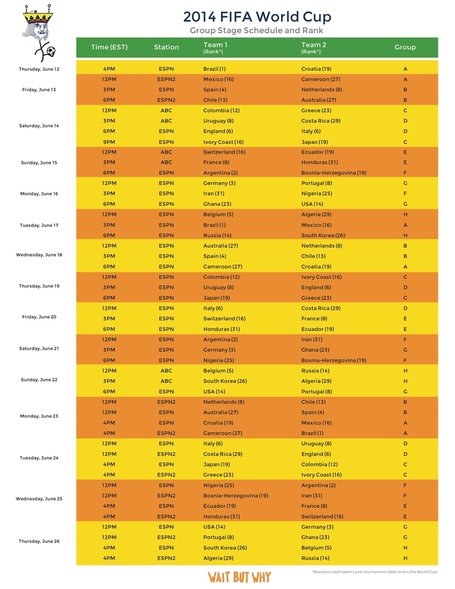 Germany vs. Portugal: 11 AM Monday. One of the two best players in the world in Cristiano Ronaldo leads Portugal against the Buffalo Bills (four runner up finishes, the most in history... except they've also won the World Cup a few times) of international soccer. Germany is always potent at any international competition, and while the Portuguese have not looked great in recent friendlies, the singular talent and ego of Ronaldo could lead any team further than it should go. This game is also notable in that it includes two of the three teams the U.S. has in their group.

Spain vs. Netherlands: 2 PM Friday. A rematch of the 2010 World Cup final, in which Andres Iniesta's extra time goal won it 1-0 for Spain. You may remember this as the game in which there was roughly 27325 yellow cards handed out, including just a yellow on Dutchman Nigel De Jong for kung-fu kicking Xabi Alonso in the chest.

Violent, sternum shattering tackles aside, the Dutch always play an entertaining, fast paced brand of football, while the oddly underrated Spaniards (FiveThirtyEight gives Spain, the World Cup and two time European champs, only an 8% chance of winning it all) basically destroy everyone in their path with precise, ticky tack passing. This is a can't miss.

England vs. Italy: 5 PM Saturday. The inventors of the game against Italy, who nobody seems to like outside of Italians, probably at least partly due to the diving that is on the rise everywhere in soccer, but first popularized by the Azzuri. Even Zinedine Zidane's headbutt in the 2006 World Cup final likely involved some flopping by Marco Materrazi. England has the highest hopes, but seemingly never has the right personnel/coaching to get them past the quarterfinals. This game features some pretty decent talent on the field, but with both featuring plodding, defensive styles, it will likely end up in a 0-0 draw.

We'll be throwing up another primer for the next set (3 in all) of round-robin games.