Well, that was fun. Despite an incredibly leaky backline and being dominated in possession by a nearly 2 to 1 margin at times, the USMNT pulled off a 2-1 win, thanks to Johnny Futbol Brooks' header in the 86th minute. Here's a great view from the stands with the American Outlaws. Oh, and Clint Dempsey's first minute goal (the 6th fastest in World Cup history) was pretty sweet too.

Meanwhile, America's next foe Portugal was thoroughly embarrassed by the well oiled machine of Germany, getting dismantled 4-0. The game also caused injuries to star defender Fábio Coentrão and striker Hugo Almeida that will see them out for the rest of the group stage. Pepe, Portugal's other star defender, is also suspended for the match against the US for an idiotic headbutt of German forward Thomas Müller after an egregious dive by Müller. Cristiano Ronaldo was not amused by any of this.

America may have started the tournament staring at the group of death, but with a win in hand, and Portugal looking dysfunctional, advancement to the knockout stage is looking good. 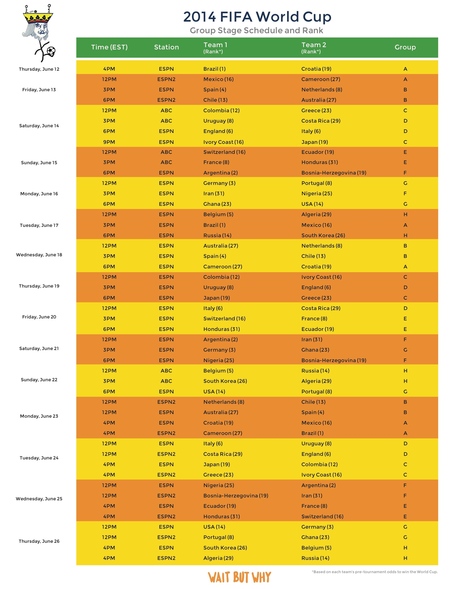 Brazil vs. Mexico - Tuesday 2 PM. The host country came out looking tentative in a 3-1 win over Croatia that was far closer than the score indicated, with many attributing a few bad decisions that went against Croatia being the difference, while the Mexicans took an entire half to figure out the offside rule in soccer before they finally beat Cameroon. The Brazilians will surely be looking to impress.

Spain vs. Chile - Wednesday 2 PM. Currently first in the world by a large margin, the Spaniards didn't just lose, they were destroyed by the Netherlands 5-1 in their opener. The best college football equivalent to this would be like Alabama losing to Auburn in this year's Iron Bowl, but repeat the Chris Davis kickoff return 4 times. Lost in the hype of the shocking defeat was Chile looking dangerously good against Australia, though many teams would against the lowest ranked team in the tournament.

Uruguay vs. England - Thursday 2 PM. The Uruguayans suffered the other shocking defeat in the first set of games, beaten soundly by Costa Rica(!) 3-1. Luis Suarez is back, however, and will be taking on a bunch of his Liverpool teammates on the England squad. England is coming off an encouraging, yet disappointing loss (it feels like any English soccer performance ever could be described this way) to Italy. Is Suarez hungry enough to take a bite out of England?

Switzerland vs. France - Friday 2 PM. I guess the key to watching is to make sure you block out your work schedule from 2 PM on, because this makes four great games. The Swiss and French will be battling it out for Group E supremacy, both looking good in their openers. If there is a benevolent sports god, we'll be treated to another last second winner from the most neutral country in the world.