Share All sharing options for: The Iowa Beer Article: Part 1

Beer. It is a common bond among the Iowa State faithful. It informs this website's name. It has been at the root of our darkest days (see website title) and right there with us for our greatest triumphs. It's a magical substance that has enriched many of our lives, and punished our livers. Today, WRNL celebrates this wonderful beverage, and the fine institutions across the Cyclone State which work to quench our thirst! In this series we will feature multiple Iowa craft breweries over the next few weeks.

As anyone who hasn't been living under a rock the past decade has noticed the beer explosion that has swept this country.  The movement towards a local based product, and the seemingly endless flavor possibilities that come with it have captured drinkers nationwide, and has resulted in an explosion in the number of breweries.  While still a ways short of the number of different breweries pre-Prohibition, we're back on the right track.

Our state has been no stranger to this movement.  In 2008, there were less than 10 breweries in the state.  According to the official State of Iowa tourism website, there are currently 42.  This list included Granite City locations, which for my purposes shouldn't really count as Iowa breweries, but I digress.  Any way you slice it, it's a great time to be a beer lover in our state.  Sit back as Ol' Norm guides you to some of his favorite brews around the State.  Keep in mind, with this explosion, it's hampered my ability to get out and actually try them all, so if there's a brewery you like and I miss, or want me to cover, feel free to sing it's praises in the comment section.  Let's get drinking! 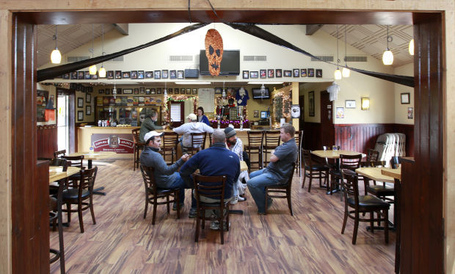 Let's get this one out of the way, right off the bat.  Right now, Toppling Goliath is not only the (unquestionably) hottest brewery in Iowa, it's also one of the most celebrated brewery's in the United States right now.  A quick Google search will show that pretty much everyone who has tried this stuff falls in love with it pretty quickly.  I am another unabashed fan boy.

Since moving to Northeast Iowa in 2012, Toppling Goliath has been my local brewery, and I couldn't be luckier on that front.  Their main focus is on extremely hop forward beers, with a very light and clean malt bill that serves two purposes:  first, it keeps the flavor profile centered directly on the hops, and second, it makes the beers lighter in body and extremely drinkable.  This is perhaps Toppling Goliath's greatest innovation.  Where so many excessively hopped beers feel the need to beef it up with a ton of malt, to the point where it's an equal flavor point, and you lose that pure hop flavor.  On top of this, TG tends to make single hop beers, where they focus on the flavor of one hop at a time.  My favorite TG offerings are as follows:

1.  PsuedoSue (American Pale Ale) This is their most popular beer nationwide, and with good reason.  It features the citra hop and it's sweet, grapefruity flavor first and foremost.  It's also extremely refreshing.  I've seen many people who "don't like hoppy beers" fall in love with this one.

2.  ZeeLander (India Pale Ale) A single hop IPA which features the Nelson Sauvign hop grown in New Zealand, this beer is incredible.  It's a spicy hop that almost has a pepper like taste to it, it's way too easy to crush this shit.

3.  Thresher Wheat (Hoppy Wheat Ale) Similar in style to Boulevard's 80 Acre, this summer seasonal isn't available year round, but if there's a better combination of refreshment and flavor in beer, I'd like to see it.  Using wheat instead of malted barley for the grain bill, it starts like a traditional wheat beer, but then they hop the shit out of it.  The result is a beer that tastes like a pale ale, but goes down like wheat beer.

Toppling Goliath is putting Iowa beer on the map, and we couldn't ask for a better representative. 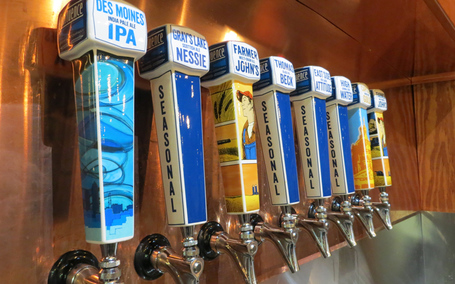 Located near the heart of Iowa' Capital City, Confluence has fully embraced the Iowan aesthetic, and it informs every aspect of their business.  From the construction of the beers themselves, to the focus of their branding and marketing, Confluence celebrates the Cyclone State in full.

Confluence celebrates the entire beer spectrum, refusing to pigeon hole themselves as the kind of place that's only interested in one style of beer.  From hop forward, challenging IPAs, to lighter crushable grain-forward ales, to complex and roasty stouts, they don't back down from any particular style.  At this stage in the game, I think it's safe to call them across-the-board leader among Central Iowa breweries.  A few of my favorites:

1.  Des Moines IPA An homage to the Capital City, this is a more balanced IPA than it's counter parts at Toppling Goliath, but an excellent beer nonetheless.  The hops are the predominant flavor, but the malt backbone is interesting enough that it's presence is welcomed.

2.  Take Down Irish Stout Perhaps the only Irish style stout being brewed in the area, this beer stands up to the classic Irish stout tradition with it's dry, lighter body, and is absolutely amazing when poured off a nitrogen tap line, just like it's predecessor, Guinness.

3. Farmer John's Multi-Grain Ale (Blonde Ale) While blonde ales are generally a style I lack interest in, there's something to be said for making a light, easy drinking beer with a lot of flavor.  Look no further than Confluence's flagship.  While making use of local grains, they create an easy drinking beer that actually tastes like something (fresh cereal grains in particular).

As Confluence looks to increase distribution and begin canning in 2014, expect them to start making waves across the state and beyond. 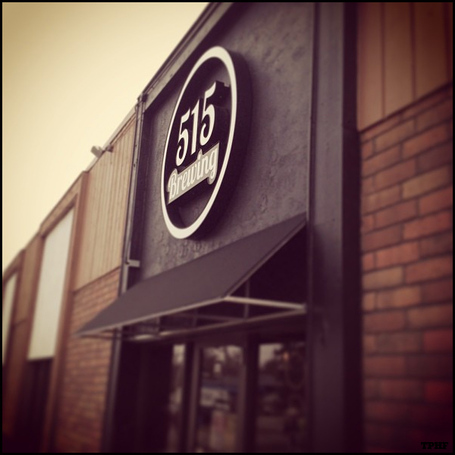 Now, I've only been to 515 once, but I have to say that I was incredibly impressed with the beer they produced.  A true nano-brewery, 515 operates on a very small system.  While this makes it difficult for them to keep a consistent stock on hand, it allows them to take bigger risks and really experiment with the beers that they are making.  This allows for some wildly interesting beers that would, in the hands of less skilled brewers, be susceptible to varying degrees of quality.  Thankfully, at 515, that's not the case.

Hopititis was everything I want out of a Double India Pale Ale.  It was hoppy as hell, with a little booze warmth, but a lighter grain bill.  It seemed cut from a similar cloth as Bell's Hopslam, but much fresher and more reasonably priced.

Mexican Spring is a wheat beer with agave nectar and lime.  It's refreshing with the wheat grain bill, but the agave and lime added a great spicy, fruity aspect to things.  Another winner.

Look for 515 to continue to be a fixture in the Des Moines area beer scene for a long time to come.  Oh yeah, the brewers are also Cyclones.  That never hurts.

That's all for this week.  Leave your thoughts, comments, suggestions, or booze stories below.  We'll see you back soon as we take a look at Singlespeed, Olde Main, and Backpocket.  Cheers!