The second piece in a three part series highlighting some of Iowa's local breweries.

Share All sharing options for: The Iowa Beer Article: Part 2

We roll into part two of our three part series featuring select Iowa breweries and we're going on a college tour of sorts this week as we feature the prominent breweries in Iowa's three biggest college towns.  Saddle on up for another round of beer reviews. 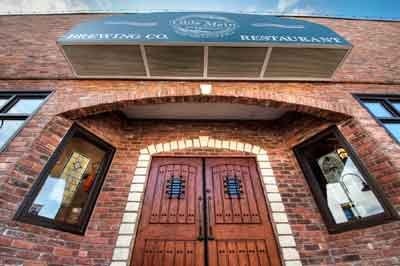 Ah, Olde Main.  Perhaps one of the more polarizing breweries in Iowa.  Frequently dismissed by some beer snobs due to their lack of complex, hoppy IPAs or Imperial Stouts, and frequently beloved by those whose taste in craft beer is developing, or who seek more approachable, accessible craft beers.  For many ISU alums who graduated in the now 10 years since it opened it's heavy wooden doors, it and it's beers have served as an important landmark on our journey as beer drinkers.  From chugging Dinkey on $1 pint nights, to warming up with some Scotch Ale at cold tailgates, Olde Main has served as the gateway to craft beer for a few generations of ISU students.  A few of my favorites:

1.  Elkman Milk Stout One of Olde Main's rarer seasonals, Elkman Milk Stout is arguably the best stout being in made in Iowa these days, and one of the best I've had anywhere.  There's nothing challenging about this beer, it's just simply delicious.  A creamy blend of coffee and chocolate notes, with just enough roasty bitterness to remind you that it's still, this is a ridiculously drinkable beer, and there's a reason that it doesn't last long anywhere it might show up on tap.

2.  Sodbuster Stout Probably my favorite year-round Iowa stout.  What Olde Main does best (and probably does better than anyone else in Iowa) is make really approachable, enjoyable dark, roasty beers.  Sodbuster has a full balance of the flavors you look for in a stout (roasted grain and hints of coffee), and manages to be very smooth.  Not at all "chewy", like some folks like to accuse stouts of being.

3.  Dinkey Wheat Blue Moon, but better.  A perfect beer for a scorching hot tailgate.  A great version of the Americanized Belgian Wheat ale, and a refreshing choice for any type of warm weather gathering.  I don't have a lot to say about this beer other than that I like it, and I don't normally like these kind of beers.  Perhaps it's nostalgia, but I don't think so. 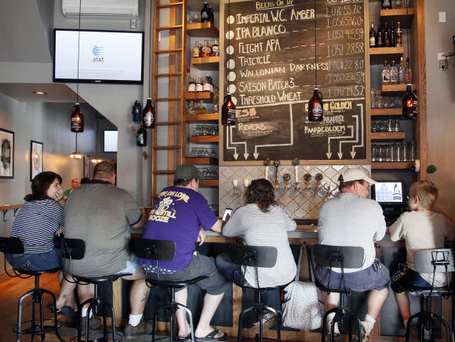 Singlespeed is is a recent player on the Iowa beer scene, and became the first full time independent brewery/taphouse in the Cedar Valley in 2012.  They run their whole system on a small batch, and the entire idea behind their operation is to not develop any flagships until they've been up and running for awhile, and have figured out which of their beers have gotten the best reception.  What this means is that they are experimental as hell right now, and it's freaking awesome.  They rival (and maybe exceed) 515 in sheer creativity, and the only real knock against these guys is that sometimes the experiments turn out to be more interesting than good, and that it's hard to say they have any one single beer that you can direct someone to, due to the constant rotation.

However, anytime I've been here, at least 75% of the beers on tap were "very good" and (as stated earlier) the ones that didn't quite cut the mustard were at least interesting and worth trying.  As these guys continue to grow and gain popularity (it is always packed in there), look for them to continue to push the envelope and crank out beers that are both interesting and delicious.  I highly recommend stopping in for those passing through (or living in) the Waterloo/Cedar Falls area.  A few of the beers I've had there and really enjoyed:

1.  Pinata Pale Ale A collaboration between SingleSpeed and Broad Street Brewing out of Reinbeck, this was a pale ale featuring roasted jalapeno, cilantro, and agave nectar along with flaked corn for the grain bill.  The blend of non-beer flavors wasn't overpowering at all, but add a really good slight kick of spice that held up really well with the hop blend.  I've always like eating spicy food while drinking hoppy beer, and this beer perfectly paired that flavor profile together.

2.  Tricycle Cream Ale This was an excellent concoction that was brewed in the cream ale style with wheat for the grain bill, and more aggressively hopped than either a cream ale or wheat ale would be.  The result was a strong balance between approach-ability and hop flavor.  Easy drinking, yet flavorful.  A winner.  This has been a popular enough brew for them that it gets made on a pretty regular basis, and may be the closest they have to a flagship.

3.  Kumquatta Blonde Ale All of SingleSpeed's lighter ales have really noticeable, flavorful grain bill that has a strong cereal grain flavor, and this is no exception.  Throw kumquats into the mix, and you get a great tart, citrus flavor to offset it.  A hell of a good summer beer. 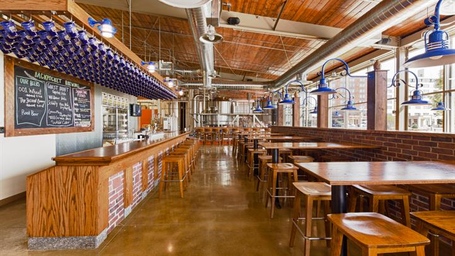 Nestled in the heart of Hawkeye Country, Backpocket boasts one of the most developed brewing facilities in the state.  They got their humble start next door to the Old Man River restaurant in downtown McGregor, Iowa tucked away in a canyon next to the Mighty Mississippi.  Their tasty German style beers soon got them attention around the state, and they were lured away to Coralville to replace the (at the time) massive void in the brewing industry in the I-380 Corridor.

Backpocket prides themselves on making beers in the German tradition of using only yeast, water, hops, and barley in crafting beers.  They start with traditional German styles, and pare them up with American grain and hop bills to make some fairly unique and drinkable beers, that tend towards the maltier side of the pallet.  They're perhaps the most consistent producers of quality lagers in the state.  A few choice samples:

1.  Gold Coin Lager A simple, Helles style golden German lager, Gold Coin is probably my favorite "standard" lager being made in Iowa these days.  It pours a golden color, and has a dominant grain flavor, with the hops only serving to bitter the beer up some.  This beer has the potential to be Iowa's Grain Belt.

2.  Slingshot A dark German lager, this has all the roasted grain flavor you look for in a darker, with the smooth body of a lager.  Deep, rich, and malty, I really started enjoying this one as a "breakfast beer" when having Jethro's Brunch, hungover as shit during my days in Des Moines.

3.  Jacknife A "German Pale Ale", if you will.  This uses German malts, but beefs up the hops for the American palate.  A great hybrid brew that rides that line of drinkability and high end flavor well.

As usual, leave comments, thoughts, drinking stories, scathing critique, or anything else you care to share.  CHEERS!