The long awaited conclusion to the Iowa Craft Beer series

For the final installation of the series, I plan on highlighting 3 breweries in North Central Iowa (all within 20 minutes of each other) that don't necessarily receive a ton of publicity, but are really cranking out some high quality beers, and deserve to see some love thrown their way.  If you ever find yourself northbound on I-35, and thirsty, look no further than these joints to quench your savage thirst! 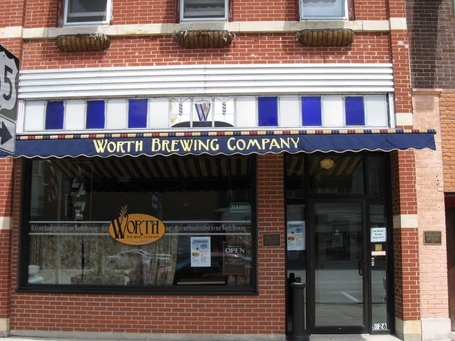 Nestled in a tiny, but historic building in downtown Northwood, the Worth Brewing Company was one of the first breweries in Iowa to spring up as part of the recent craft brewing explosion.  Opening their doors in 2007, they have etched out their space as the place in Northwood to get good beer, and they've developed a very strong cult following in their area.  Their small system allows them the freedom to really experiment with their styles, and react to what the locals are into.  The bar sits in an old bank teller's circular booth, which helps create a unique, interesting atmosphere. 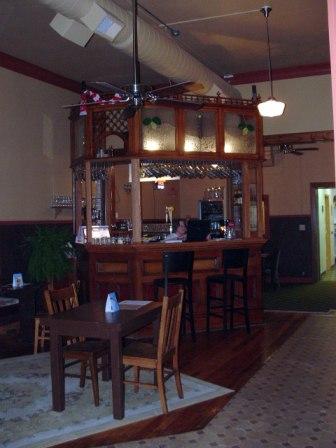 But atmosphere only goes so far.  Thankfully, the beer is well worth the stop.  Here are a few of my favorites (keep in mind, they mix things up a lot).

1.  Sunderland English Mild This is a style that is rarely tackled by American breweries, but Worth has hit the nail on the head.  They manage to produce roasty notes, slight hop spiciness, and some sour-esque tartness all while keeping the body light, and the alcohol fairly low.  The result is a light drinking, dark looking beer with just enough funk and roast to stay interesting, but also allow you to drink it all damn night, if so inclined.

2.  Field Trip IPA This beer is an homage to the first Worth Brewing Company sponsored RAGBRAI team, and it serves them well.  A classic American IPA, it has a big nose, is hop forward, and has just a hint of malt backbone.  While not breaking the mold in any way, it holds it's own in a crowded field. 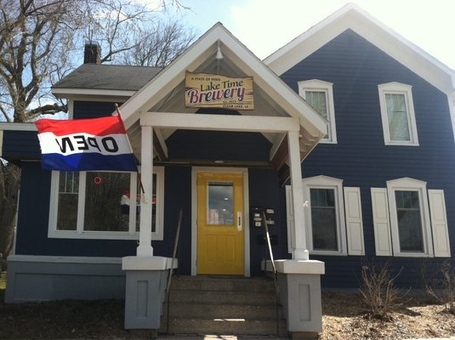 This brewery has appeared, seemingly out of nowhere, on the scene in the past year or so.  I had never even heard of it prior to my day of RAGBRAI this year, and I only live 1.5 hours from Clear Lake.  Needless to say, I was a little skeptical about the product.  Consider my skepticism to be completely unwarranted:  these guys are making really, really good beer.  And it's about damn time someone pointed it out.

The brewery is housed in an old house on the main drag connecting downtown Clear Lake to US Highway 18, which gives it a very unique atmosphere as breweries go.  The bar is in what appears to have previously been a dining room, and the actual brewing happens in what appears to have been the kitchen.  The large deck and outdoor patio provide for a great space to kick back with a brew on a summer evening.  Alright, let's get to the beer:

1.  Propeller IPA Like a certain other nameless Iowa brewery, Lake Time has discovered the joy of single hop beer.  This one is made exclusively with Simcoe hops, and they give a stronger pine/spice character than some other hops.  This beer is a vehicle for that flavor, and overwhelmingly succeeds.

2.  Strawberry Blonde Your inner beer snob is saying "are you serious?"  My response is "Yes".  This is beer is everything that a fruit/beer hybrid should be.  It provides the unmistakable flavor of Strawberries, without being excessively sweet, and then lets the grain bill shine through.  It's like drinking a glass of strawberry crisp that gets you drunk.

3.  SMaSH Standing for "Single malt and single hops" this beer uses nothing but 6 row malted barley and El Dorado hops.  The result is an extremely well balanced ale, that would probably be classified as a pale, but presents the malt flavor just as prominently as the hop flavor.

Seriously, this brewery kicks ass.  Let's see if they make it for a few years, but in straight up beer quality, they're Top 5 in the state right now.

Located in a cool old building just off the park square in downtown Mason City, Mason City Brewing Company has been at the forefront of an effort to bring downtown Mason City back to serious viability in recent years.  By providing a great atmosphere and quality beers, they are certainly leading the way on that front.  The long, narrow space features a small bar, and also puts the brewing process on display for the drinker.  Like many small Iowa breweries, they rely on their small batch system for constant experimentation, and don't really keep "flagship" beers.  Another cool note, is that the brewery entirely got off the ground via Kickstarter. 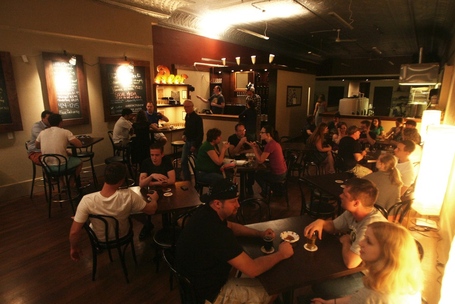 1.  Session IPA While this style is blowing up nationally, thanks to great beers like Founder's All Day or Stone's Go-To, the Iowa beer scene hasn't necessarily embraced low alcohol, high flavor IPAs yet.  Except for Mason City, that is.  The Session IPA checks off all the requirements for this style.  It's hop forward, with a light body, and with an ABV below 5%, it can be pounded all night.

2.  Milk Stout This is a milk stout that goes to the next level.  They introduce some smokey malt, that provides another layer of flavor, yet avoids fucking it all up.  The smokey, roasty grains pair up really well with the creaminess from the lactose, and the chocolate that's added in the brewing process.  A knock out beer.

Well, there you have it folks.  Our summer beer tour has come to an end, and while we don't have the time to explore all the beer offerings our great state has, we hope this encourages you to check out what's in your area, or make the journey to any of the fine establishments we've highlighted along the way.