Share All sharing options for: The Hate Week Troll: Iowa

This week: University of Iowa

Usually this space is reserved for me to make a mockery of an entire state. I usually bring up stuff like how your state should leave the union or just has an overall terrible history. But since Ames, Iowa happens to be in well, Iowa, I will be focusing on something far worse and evil.  The Iowa Hawkeye fanbase. We know your fanbase more than anyone else. You live amongst us in the shadows - of your trailer - relaxing with your 12 children in the kiddie pool.  We know this because we’ve all seen it.  I know, I know, "Oh, he made a Hawkeye-trailer trash joke. REAL ORGINAL." We make that joke because we see it far too often. When the backwoods people of Iowa come out, they are usually wearing jorts and a sleeveless Hawkeye shirt.  And eastern Iowa can’t even do heroin right.

But let’s get back to making sweeping generalizations of a large group of people.  As a Cyclone fan, you come off as one of the most ungrateful fan bases around. Your coach has gotten you to multiple (former) BCS bowl games, and even won one!  Yet, year in and year out, we hear calls for his head.  I know he plays a boring brand of football, but he is only doing what the rest of conference is doing.  And is actually quite good at it.  But if there is one incompletion, the entire fanbase just blurts, "COME ON."  This is a very compelling, educated response to such a horrible calamity that is an incompletion.  There were more "COME ON STANZI’s" in the history of "COME ON’s" the season you won the Orange Bowl.  THE ORANGE BOWL.  COME ON. 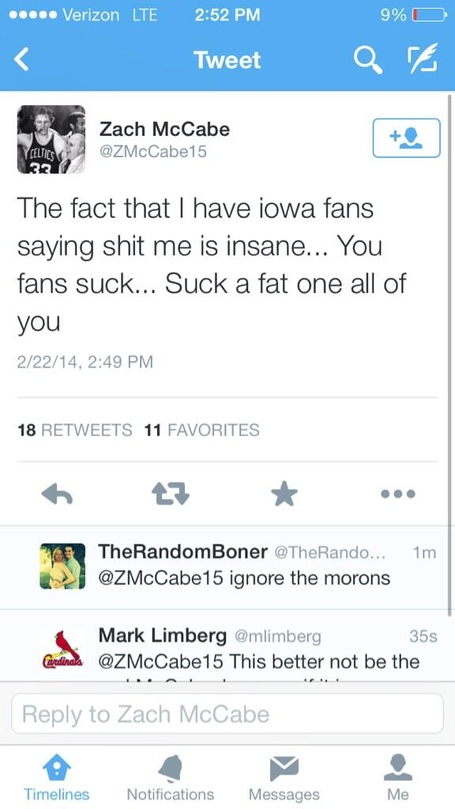 So you also hate your own players! Showing your true colors, I see. Perpetual three-point misser, Zach McCabe, doesn’t appreciate you calling him out for perpetually missing three-pointers. There were so many "fans" telling him he "sucks", he went ahead and told you ALL to - "suck a fat one" - whatever that is supposed to mean. This then led to Coach Redface to ground all of his players from Twitter, all while the team and fans spiraled out of control. McCabe at least resisted the urge to punch your fan's faces till after the collapse. 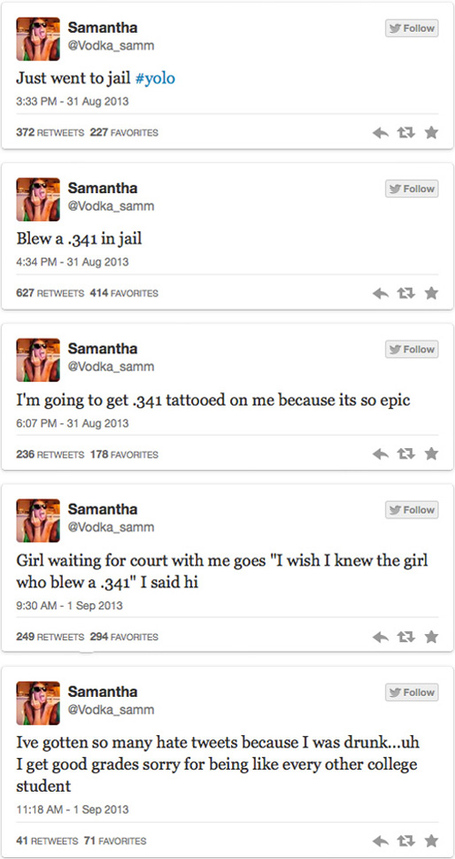 That’s future Hawkeye mascot, Vodka Samm. It’s a great nickname, if it were really her nickname. It’s her actual Twitter handle. So, she already had a reputation of sorts. She is SO PROUD to almost be dead. Not even Cyclone Football would drive any of us to that point. And let’s not forget she drank Hawkeye Vodka – Iowa’s finest – just like everyone in this article.

Also, you seem to be supporting an awful terrorist organization.

Many of the above statements could have been attributed to this section, but the expansion of suck doesn’t follow city lines. So let’s look at things that happen within city lines. Here’s what a year of arrests on campus looks like. Correlates pretty well with being a "top party school", huh? The article does note that only 46% of arrests were students! But unfortunately for you, a number of the arrestees were, "40, 50 and even 70" years old. That’s a pretty impressive number of "alumni" being real winners. Want proof? Four men over 30 were arrested, along with the Adel Desoto Minburn High School Principal, in Iowa City last Saturday. He was found, "sitting near a garbage can with vomit on his shorts and a pile of vomit near him". It was 3:30 pm. Oh, boy. This is something his students aren’t even stupid enough to do. And may I remind you, high schooler’s are very, very, stupid when it comes to drinking. At least he is teaching his students a lesson, right? He is sacrificing his career to teach our youth that going to Iowa City will RUIN YOUR LIFE. This man is a genius, or if you’re asking Vodka Samm, a bitch.

Want more educational leaders behaving poorly? Well you’re in luck! An Iowa City School Board member was also arrested Saturday for domestic abuse. While she is no Ray Rice, her attack with a clothes hanger was rather… unique.

Also, the State Capital title was stripped from you and given to Des Moines. You suck.

This stadium is in a shitty location, in a shitty town, and filled with shitty people. At least the University Hospital is right next door so everyone who needs to get their stomachs pumped don’t have to travel far. Not like it matters though because that place always has a damn line. And if you manage to avoid the hospital and the police this Saturday, congrats! Your reward is that you get to drive drunk in that labyrinth you call a transportation system. Getting out of this city from the stadium is a danger to your life.

I can’t have a hate segment about Kinnick Stadium without mentioning your pink visitors’ locker room. Hayden Fry thought he was just the MOST CLEVER. "Hey, maybe if we paint this thing pink they will become Cabbage Patch Kids and rainbows. Football will be the last thing on their minds!" If he honestly thought that the color pink would make a team play any worse, he’s delusional and probably a bit homophobic. 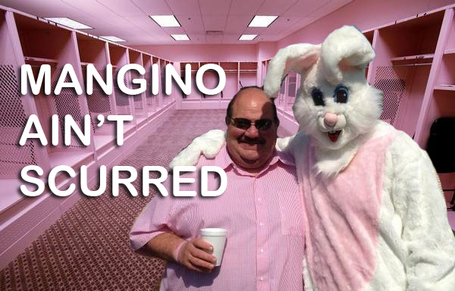 Herky has an update! And you people hate it! You went from having a 30 pound, big, dumb, empty, stupid, fiberglass head to a $10,000 mess that doesn’t know if football players wear helmets or not. Do you Hawkeye’s even know what "Herky" stands for? I know you don’t, so let me enlighten you. Herky is short for Hercules. This makes absolutely zero sense, in any universe. Hercules is not a bird. Hercules actually kills man-eating birds that have poisonous shit. Which is terrifying. But Herky is in no way terrifying. Herky would get his ass kicked by a sober Vodka Samm. Herky sucks.

Like the rest of your conservative conference, you play in a "pro style" offense. But the pros actually move the ball down the field into this thing called the "end zone". "B-BUT D-DE-DEFENSE WINS CHA-CHAMPIONSHIPS!" Do you want to know what else those championship defenses had? A competent offense. Running the ball every 1st and 2nd down isn’t competent or exciting. It’s boring. Just like your conference that got nuked last weekend from any semblance of a playoff. You are slowly but surely killing your fan base with boredom. At least we will die from a broken heart and/or scrotal poppage. 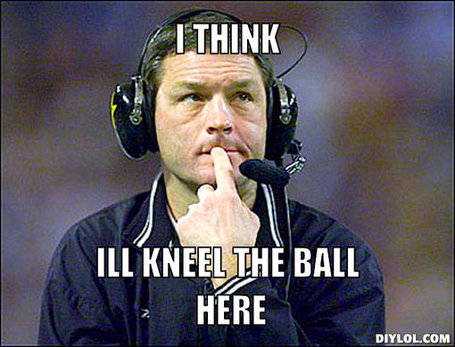 Kirk Ferentz is the anti- Paul Rhoads. If Kirk and Paul were to touch, it would obliterate the entire universe. Paul Rhoads has ALL the emotions. Well, mostly he’s PROUD. But Kirk Ferentz has two emotions. One is anger…at reporters who ask him if his star player is hurt or not. The other is love…for his gum. He will chew that stuff all game long with the same stupid look on his face. I bet the gum was given to him by Jim Delany and is laced with boredom. He needs to keep his company men in line and can't have them thinking about scoring points.

Also, Kirk Ferentz makes the most money of any public employee in the state. As a taxpayer, this will not stand. Can we just give his salary to Fred Hoiberg already? Now there is a something actually worth putting our tax dollars behind.

If you have any other perfectly logical reasons for why we are better than Iowa, don't hesitate to share.