Iowa State came away with victory #1 on Saturday. Now we wonder what looked good, what didn't, and what's going to happen against Baylor in two weeks?

These things are so much more fun to write after a win.  When you win it's easier to accentuate the positives and overlook the negatives.  Such is the case with Iowa State's last second 20-17 victory over Iowa on Saturday.  There were the goods (wheel route!) and the bads (fumbles), but in the end the good outweighed the bads just enough for the Cyclones to escape with a last second victory for the second time in three years.

Go back to a week ago and that inevitable shoe dropping feeling you could sense in the 4th quarter.   That feeling didn't exist this week.  At some point after DeVondrick Nealy's fumble in the 2nd quarter a certain sense of calm fell over me, and most of the people I was watching with.  Despite a slow start to the second half, the Cyclones were looking tougher.  Iowa wasn't moving the ball consistently and the ballsy jump pass on 4th down from Sam Richardson to E.J. Bibbs was the exact play that this team needed to get its head right.  Mark Mangino reached in to his bag of tricks, saw a tendency from Iowa to blitz in those situations, and entrusted two of his best playmakers to right the ship.

After that play I had the same feeling I did after Jarvis West's reverse pass touchdown to Allen Lazard a week ago: Rhoads, Mangino, and company are unloading the chamber... again.

Not a lot went great, but a lot went well.  You have to start with Richardson, who put in a virtuoso performance that saw him make plays with his feet when needed, and throw absolute darts when given the opportunity.  Richardson's dart to Bibbs late in the 2nd quarter was the second best throw of his career (the best: the deep pass into the wind to hit Quenton Bundrage in stride against West Virginia in Riot Bowl I), and a throw he doesn't make a year ago.  The confidence Sam is playing with right now is as high as it's ever been and a performance like Saturday's is only going to galvanize him, and the entire offense, more.

Richardson's stat line looked eerily similar to another quarterback's, and one a lot of people said was one of the best performances in Iowa State history:

It goes without saying, but In Richardson We Trust.

Midway through the 2nd quarter I lamented that we weren't stretching Iowa horizontally and it's why the rushing attack was failing and no one was open over the middle.  No sooner had I said that when Iowa State tried to run a quick swing pass to Bibbs.  The throw was poor and Bibbs failed to make the catch.  However, from that point on Iowa's defense changed.

Richardson managed to hit West, Lazard, and Bibbs all on that drive, and all down the middle  The outside linebackers started recognizing the threat in the quick passing game, and that opened up the middle to be skewered by Richardson.  The 19 yard pass to Lazard on the drive was the Y shallow concept executed to perfection: 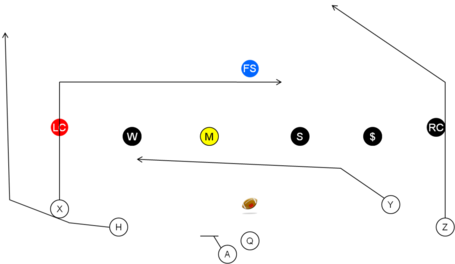 At this point the Iowa defense was so concerned about Bibbs and West that they had no choice but to train their defense on the edges when those two were moving, and it opened up Lazard to be one on one with the safety.

The running game never quite got going enough for my liking (26 carries, 82 yards, longest run of 12 yards), but was dangerous enough that Iowa committed resources to it continually and their man coverage on Nealy's touchdown burnt them badly.

I cannot say enough about the defense and their ability to keep the big play from happening.  Iowa was committed to shortening the game and keeping Iowa State's offense off the field, but the defense was committed to making Iowa grind it out and earn every yard.  The longest play of the day was a 33 yard pass to Ray Hamilton on first down that would eventually set up Iowa's second touchdown.  Yet, that gain was made entirely possible by a mistake in coverage by Alton Meeks.  When Iowa released two tight ends up the seam it was Meeks' responsibility to take the inside man, but he failed and stayed with Jake Duzey too long.  That's correctable.

For the first time this season the Cyclones didn't look out gunned on defense.  Some of that is on Iowa's unimpressive offensive line and a very hurt Brandon Scherff.  Some of it is a credit to Wally Burnham and his adjustments - moving Jevohn Miller to the middle, starting Qujuan Floyd at safety, rotating corners so Iowa couldn't target only Sam E. Richardson - and some of it is credit to the leadership of Cory Morrissey and how he has his linemates looking like a real, capable college defensive line.  This defense isn't going to be on top of the Big XII in any statistical measure, but if they keep growing like this and stay committed to taking something away from the other team then they might just be good enough to keep games close enough for the offense.

You hate to nitpick things in a win, but here goes.

The offense has to be more consistent.  Getting points on the board on the second drive helped keep them within striking distance, but the drive stalled a little past midfield and set us up with a familiar situation: A long field goal attempt.  Fortunately for us Netten nailed a new career long and the Cyclones got on the scoreboard.

To me it looks like the running game is what needs to improve to get the offense started early.  The timing and accuracy required in the passing game is so dependent on the flow of the game, and running the ball effectively early on just serves to open more up.  Again, this is nitpicky given the type of defenses Iowa State has seen the first three games, but getting chunks of yards on the ground early will help the offense with those fast starts they've been looking for.

As I articulated above, the defense played very well, but they struggled on 3rd and 4th down.  Iowa was 7 for 16 on 3rd down and 3 for 3 (!) on 4th down.  A lot of those were short yardage situations where stopping Mark Weisman isn't very likely, but in the rare case they forced a passing situation they consistently couldn't get a pass rush and left the underneath open to make sure the downfield throws were covered.  This is classic "bend but don't break" mentality, but it doesn't make it any easier to watch in the heat of the moment.  There will be better offensive lines in the Big XII, and this could become a big issue down the road.

This is cherry picking, but: Nealy and Wimberly: 15 carries, 49 yards.  Enough to be effective, not enough to be dangerous.  However, factoring in the passing game you get an additional 5 touches for 59 yards and a touchdown.  Hard to argue at 20 touches for 108 yards.

Baylor comes to town in two weeks boasting another terror inducing offense.  Kirk Haaland mentioned to me this morning that a lot of last year's beatdown was the result of a poor offense, and he's completely correct.  Mangino showed the ability to manage the clock and use the "total team" concept with his offense.  Plan to see more of the same on September 27th.