Share All sharing options for: The Weekly Troll: Baylor

It's too bad that we missed you guys on the schedule last year.  After what Steele Jantz did to you in 2012, I was really looking forward to it!  We had such a good time, we were doing the wave as entertainment instead of watching your slaughtering.   I wish we could play every Big 12 South team every year.  I really think it would be interesting to see every team play each other and have like a, "One True Champion" or something.  Maybe someday realignment will come to the Big 12.  Hopefully they bring us along...Conference USA is SOOO beneath us.

As we all know, Texas is really damn big.  With such egregious size brings complications.  There is a lot wrong with Texas.  Like too much wrong.  There is so much wrong with your state, I couldn't make heads or tails of it (that's something Texans say right?).  I have to write one of these award winning considered articles for each team in the Big 12.  That's like, many, many schools from Texas.  Even with my brilliant mind, I couldn't come up with a logical system to distribute all the wrong to all the Texas schools.  Like do I attribute each wrong to the nearest school?  Who gets the secession part?  George Bush?  The ambiguous term of "Coke" for all carbonated beverages?  It's all just too much.  So I decided to keep things local-ish, and find some wrong with McLennan County, TX.

The main city in McLennan County is Waco.  Waco is pretty infamous for something else besides Baylor, but more on that in a bit.  The 2nd most interesting thing to happen in McLennan County (seriously, Wikipedia spends a lot of time on this) is something called the "Crash at Crush".  We've all seen the old, grainy films of trains crashing into each other at State Fair's and whatnot.  This was one of those on TEXAS STEROIDS.  They got 40,000 people to witness two fully-loaded trains crash into each other at very high speeds.  Inevitably, things didn't go exactly to plan.  Exploding debris ended up killing a few spectators. The KKK also has a prominent place in the county's history.  You make me sad.  Sigh.

As I mentioned above, Waco is rather infamous for something.  Do you know what it is?  That's right, the Waco Siege.  I am not going to spend a lot of time on this because this was a tragedy.  There was this crazy guy, who led these crazy people, and the authorities screwed the whole thing.  Read about it if you like, but this article has gotten a little too heavy for my liking.  Way to go Baylor.  You have successfully made the light-hearted articles that are the Weekly Troll, into a place of wrong and sadness.  A new low.  Maybe the other Texas schools can top (bottom?) you.

Let's move away from all this sadness and just keep with what is wrong with Waco.  You once fostered a red-light district!  For our good Christians out there, a red light district is an area where prostitution is legal - as in regulated by the City of Waco.  It was called the, "Reservation".  Eventually in the early 20th century, it started to fall out of favor and eventually lost its trademark protection.  But how did you E(XXX)TREMELY God fearing Southerners allow this to happen?  Did one have to marry the prostitute first?  That couldn't have been good for business, so I doubt it.  Everyone just went around getting smote because that's what happens after premarital sex.  FACT.

Around the same time, Dr. Pepper was created here.  Thanks for bringing the age of obesity to our country.  You created obesity and it has traveled all the way up here and now effects Iowa just as much Texas.  Thanks, hope you're proud.  You are a scourge and Dr. Pepper sucks.

Also, do you still call Dr. Pepper, "Coke" then?  I still have no idea how that form of communication works. 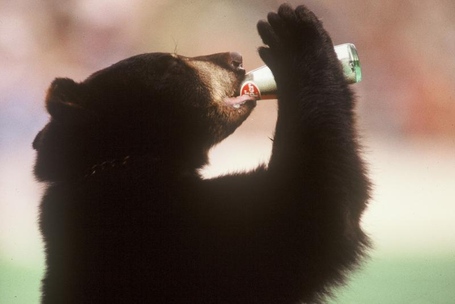 When we last visited you in 2011 (see top), you were too busy not going to the game.  But you finally got rid of the TARP and opened up your brand spankin' new stadium on the Brazos River.  You were so excited to open this thing up, you nearly killed each other.

Once in the stadium, everyone has access to free Wi-Fi!  Unless, you know, the students get excited about something.  The Wi-Fi doesn't work if people are standing.  Seriously.  But it is there just in case Baylor ever returns to its old ways, and then the fans can watch The Passion of the Christ on Netflix.

I touched on this once before, but the RGIII statue is wayyyyy premature.  It's starting to look more and more like the system rather than the player.  RGIII sucks. 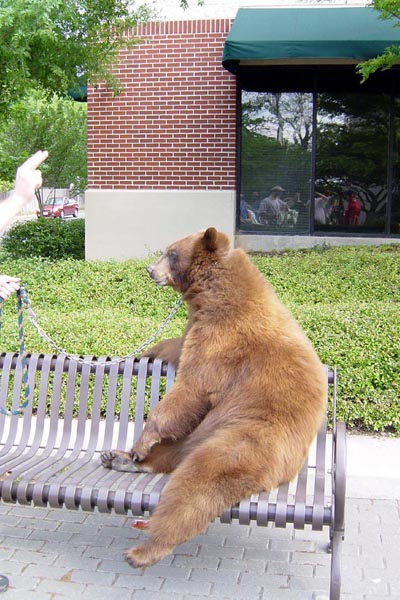 Holy shit, look at that bear.  THE ONLY THING STOPPING IT FROM EATING YOUR BOWELS IS A LEASH.  A BEAR.  ON A LEASH.  They take these, Dr. Pepper drinking killing machines around campus like its no big deal.  It's a big deal.  What if Judge Joy or Judge Lady were taking a casual stroll around campus and ATE ART BRILES.  ATE HIM.  It would be a horrible public spectacle and you would have to put them down.  You don't want that.  But if you want to have your head coach to be a salty and slightly vinegary treat for ole' Judge Joy here, be our guest.  We could use the help.

Good thing we didn't have the pleasure of playing you last year, because WHOOWEEE that could have gotten out of hand.  Your offense the last couple of years has been one of magic and witchcraft.  You average roughly 812 points a game and somehow the local faithful haven't burned you at the stake.   When people don't understand something in the Bible Belt, they usually resort to burning it.  And being the marvel that is your offense, you should be very well charred by now.  I have a theory...Art Briles sold his soul to Lucifer for the gift of touchdowns, convinced everyone in Waco he is a good "coach", and now you all are going to hell.  Is being good really that worth it?

If Art manages to not get eaten by your mascot and somehow is not practicing witchcraft, you might actually have a good coach.  He steered Baylor up the treacherous waters of program building.  We envy that.

If you have any other perfectly logical reasons for why we are better than Baylor, don't hesitate to share.