Jared Weaver recently wrapped up his career as a walk-on linebacker turned fullback for the Cyclones. Though he is busy building rocket ships for Boeing, he took some time out of his schedule to tell us what being an ISU walk-on is like. So step into the lounge, pull up a chair, grab a drink and listen to the story of an Iowa farm boy who just really wanted to play college football.

WRNL: Since some of our readers may not know much about you, why don't you tell the people a little about yourself?

Jared: I grew up on a cattle ranch and farm in Northwest Iowa near Moville, Iowa where I first learned to be "rough, tough, and not mind dust". Living out in the country was a blessing I refused to accept back then, but now I miss the heck out of it and thank God as often as possible that I can call that place home. I graduated from Iowa State last December and now work as an airframe structural engineer for the Boeing Company.

WRNL: Let's start with how you got to Iowa State. Being a walk-on, what did recruitment look like for you?

Jared: Coach Bill Bleil pulled me out of class (I went to Bishop Heelan) during the Spring of 2010 and let me just say, I was pumped to see him. He was down-to-earth guy who just loved to talk about academics, football, and hard work (not necessarily in that order). Coach Rhoads and the rest of the staff cemented this impression a few months later and my eyes turned toward proving to them that I belonged at Iowa State. You see, I not only wanted to play football, but attend a school with a great engineering program, which limited my visits to Southern Methodist University and Iowa State. Obviously, I ultimately chose the Cyclones.

WRNL: As a freshman, what was your first year in the program like?

Jared: I'd rather not talk about it... I broke my foot the first day of practice, which meant not having a chance to gain any respect from my teammates as a first year guy on the practice squad. Being injured is not fun, especially when you have not yet shed the automatic perception of being a lazy, entitled young gun on the team. It was a tough year and quitting always seemed like an attractive option.

WRNL: What did a day in the life of walk-on Jared Weaver look like, and what did it look like for walk-ons in general?

Jared: How's this sound: alarm clock ringing at 5:04 a.m., followed by the lovely and encouraging words of Coach McKnight until you make it to momentary relief as the morning agony workout comes to a close. From there it was a mad dash to make it to the 8:00 a.m. jet propulsion exam on time (professor didn't think that moving some heavy things around and ‘playing some game' early in the morning was reason enough to accommodate alternative testing options). The day would pick up speed from there in an attempt to do any homework you could in quick breaks between classes. Classes always seemed to end with a mad bike ride to Jack Trice (jetting out during the professor's closing remarks was the key) to get taped for practice and to meetings on time, then on to practice to let off steam and forget that engineering even existed.

The primary hurdle that came with ‘walk-on status' was the need to earn any bit of respect you wanted to get inside the football facility. It entailed a long and tough, yet satisfying, initiation to the football family and a healthy dose of forced humility for the foreseeable future. The great part about coming into the program this way and really having no choice but to visibly prove that you are worth your salt, was the foundation of stubborn perseverance that it set in your mind that no one could ever really take away from you afterwards.

WRNL: What exactly is WOPA, and just how close were all of you as a group?

Jared: The Walk-On Players' Association, more widely known by as ‘WOPA', is a unique group of guys who decide that you just can't put a dollar amount on the chance to play football. As a professional group, our internal core values are just what you might expect: "Work hard, give your best, don't complain, and stay humble. You will get your chance."

I think every WOPA member past and present understands what it's like living every day with a simple understanding: "Sometimes you have to be a little stupid to go after your dreams." Whenever you get a group of guys together with such a similar mindset, an incredible bond is bound to grow. Some of the coolest moments at Iowa State were the days when coach would honor a WOPA guy with a scholarship, because it was a win for all of us and always well earned

WRNL: Speaking of walk ons, you had to know Levi Peters. What was he like? And give me a crazy Levi story.

Jared: Levi Peters? Oh my, where to begin... Humble kid, hard worker, legitimate teammate, and a remarkable embodiment of someone who just absolutely loves the game. BUT despite what you might think, still human. I only say that because he too, like myself, needed to put in some extra work to master the secrets of derivatives and integrals in calculus. At some point, he said he really needed to find a way to "pass" his business calc class, and I told him that he was going to do a lot more than just pass. Getting to help him with that math class, I got to see the geek side of him; It's hard to imagine that's the guy who strikes fear into opposing players on football field can geek out over differential mathematics

As for a bit crazier Levi story, he had a summer job where he had to get particularly intimate with male hogs. I was always intrigued by his descriptions of the technique he used when working with them...

WRNL: What was your best moment as a member of the football team? (Jared is front and center in CPR's Oklahoma State post-game speech)

Jared: My most memorable moment happened the first time I walked into the equipment room at the football complex. I was flipping through a cart of game jerseys, and for the first time, saw the name ‘WEAVER' sewn onto the back of a Cyclones uniform. That image has always stuck in my mind, and at that time I just had no idea what I was in for.

Other memorable moments included getting the chance to visit patients in the Ames hospital and talk to the kids at the special Olympics. All of the ways football allowed us to serve the community gave so much extra meaning to the whole experience.

Also, definitely the Oklahoma State post-game speech, which was a huge moment for our team.

WRNL: I know you started as a linebacker, but ended your career as a fullback. Tell me about how you ended up on the offensive side of the ball your senior year...

Jared: One day before a scrimmage, Coach Mangino caught me as I was headed to my linebacker spot, tossed me an orange rag to wear over my jersey, and told me I was playing fullback for him that day. Despite not having a clue what any of the plays were (or what the snap count was), I must have done alright that day because I was told to go to all of the offensive meetings from there on out.

I was quickly initiated into the ‘Wolfpack' elite of Iowa State ballcarriers. I even had to make my own custom wolfpack shirt to blend in with the cool Nike DriFit ones worn by the veterans of the crew. Thanks to Coach Lou, I was quickly trained in the art of blocking and eventually came relatively close to something resembling a running back while trying to earn the ‘White Thunder' nickname I had been given.

WRNL: I believe the first game you saw action in was the 2014 victory in Iowa City. How did it feel to have all your hard work pay off as a senior?

Jared: People used to ask me "Why are you wasting your time playing football there? What if you never get to play?". Well, you could say playing football paid off the first time a coach ever cussed me out with my actual name, when I made my first big tackle in the backfield on a guy like Jeff Woody in Jack Trice Stadium during the spring game, or when I got to lead the team onto the game field because I had been named scout team player of the week*.

In the middle of my last season I was flying by the seat of my pants trying to learn a whole new position, and only three days removed from being a practice squad linebacker, I was seeing time with the first string offense. There is no way to capture in words my experience that day in Kinnick Stadium, but the emotion I saw in my mom's eyes when I met her outside the gates after the game summed it up perfectly. It was unbelievable, just unbelievable.

*Jared not only earned scout team player of the week, but was named the 2011 Scout Team Player of the year, and was named a First-Team All Big 12 Academic in 2014.

WRNL: One last question... Even though you've moved on to the real world, how would you sum up your experience as walk-on and member of the football team?

Jared: Playing football at Iowa State was cool for me, fun for my family, and forced me to grow in ways I could never have imagined. It brought mental and physical trials the likes of which I may never have experienced otherwise. With it came relationships that will last and trust that can be gained only through a willing common sacrifice.

Coach Mangino always told us that "life is going to hit you a lot harder than college football", and after the past few years, I couldn't feel more ready for the hits that he was talking about. I couldn't have done it without my family, and I guess it goes without saying that I owe more to my parents than I could ever repay. 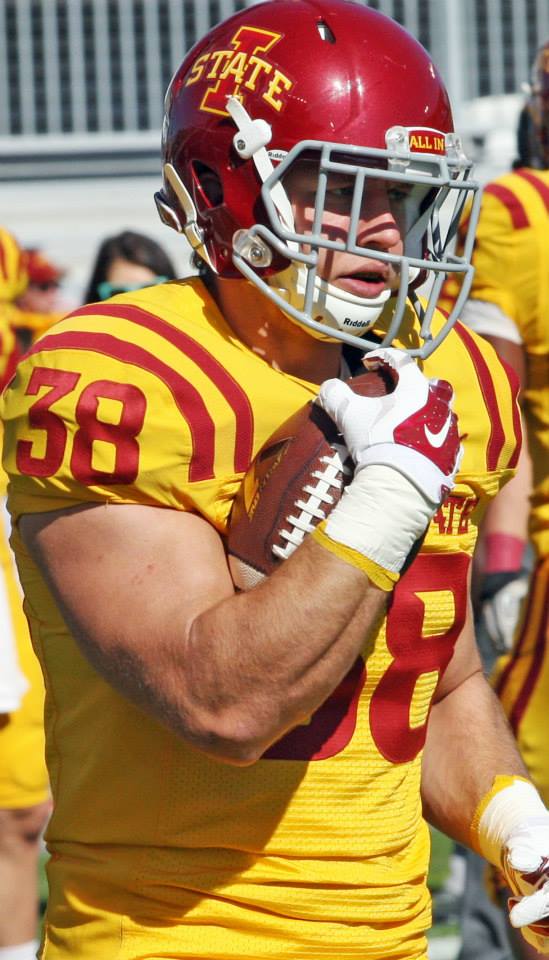