Kansas City has been good to the Cyclones the past two seasons, and this year's squad will look to make the cardinal and gold party in KC last a little bit longer.

Ladies and gentlemen, March is finally upon us.

To the average person, this means nothing more than the ushering in of spring and finally bidding adieu to winter.

To college basketball fans, March brings the NCAA tournament and all the Madness that accompanies it. That wonderful, sweet, and sometimes painful madness. This tournament has it all. Wild finishes and unsung heroes, the thrill of the "little guy" knocking off a perennial power, and the agony of defeat for the title contender.

Yes, March Madness is the culmination of the hysteria that is regular season basketball. There is, however, a bit more to this story. For there is a very lucky group of college basketball fans, located in the often-overlooked heartland of America, that get to regularly experience something that basketball fans across the country can only dream of. This weekend of heartbreak, unforgettable finishes, and huge performances by big-time players might as well be referred to as the "Preamble" for the Big Dance.

There may be many conference tournaments, but there is only one Big 12 Tournament.

First played at Kemper Arena in 1997, the Big 12 Tournament showcased some of the best players and teams in the country. Kansas, Oklahoma, and Iowa State split the first six Big 12 Tournaments, with the likes of Paul Pierce, Marcus Fizer, and Hollis Price taking home MVP honors. For the next seven years, the tournament would bounce around between Kansas City, Dallas, and Oklahoma City before finding its permanent home in Kansas City's Sprint Center.

Since then, the Big 12 Tournament has quickly become one of the best conference tournaments around. The combination of an unforgiving format, grueling competition, and the drama of conference rivals battling for the title was quickly noticed by the national media, and it quickly became the tournament to watch. While this was all well and good, the action on the court was beginning to be overshadowed by the goings-on across the street at the Power & Light District. 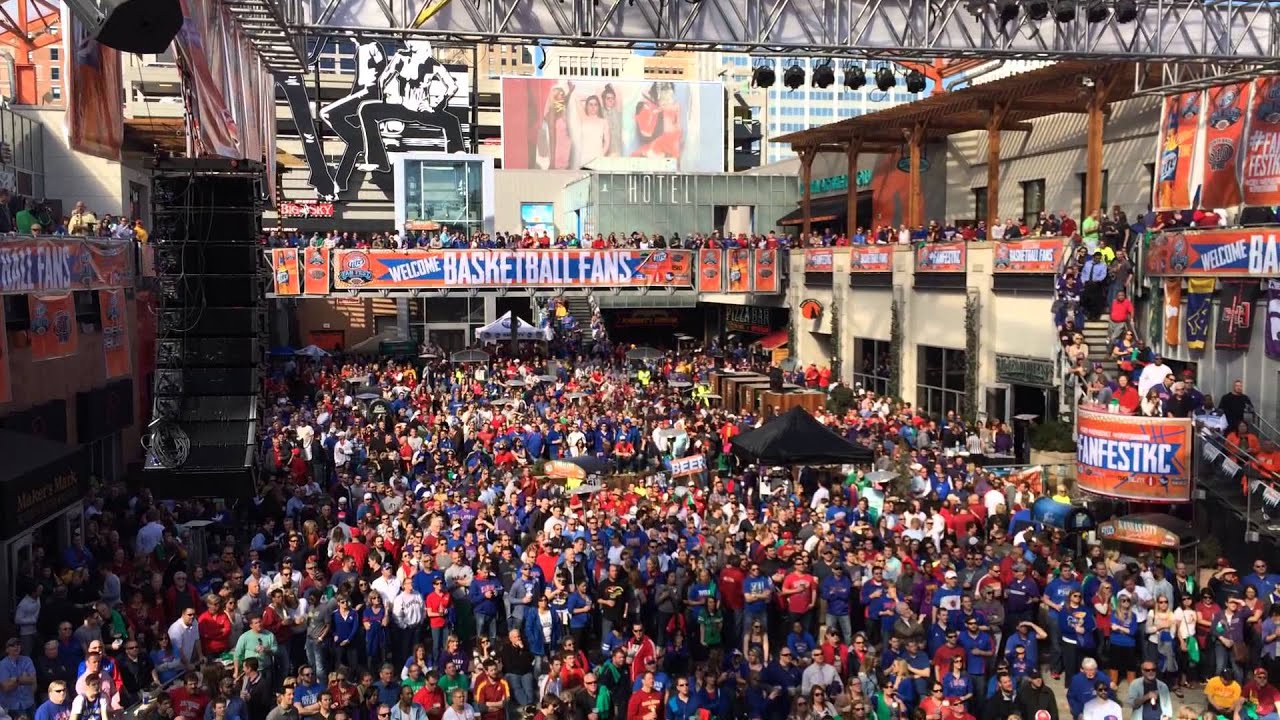 Now, let's get to the Iowa State portion of this story...

After their championship in 2000, the tournament didn't treat the Cyclones very well, as they won only four games between 2001 and 2013. Yet, faithful Cyclone fans continued to gather in Kansas City to support their team. This patience would eventually be rewarded in the grandest of fashions.

The tournament really became fun for Iowa State fans again in 2012, as the 5th seeded Cyclones battled the Texas Longhorns on a brisk Thursday night in Kansas City. Fred Hoiberg's second team had begun to breathe life into a long-dormant basketball program, and a hungry fan base swelled with hope and pride. The "Scout Dream Team" was finally eligible to play, and they were hungry for success. Though picked to finish 8th before the season began, the Royce White-led Cyclones wound up tying Baylor for 3rd place, and were poised to make the NCAA Tournament for the first time since 2005.

Speaking as a fan who was in Kansas City that night, the atmosphere in the Sprint Center was electric. The Cyclones galloped out to an 11 point lead at one point, and who could forget that 50 foot pass from White to a young Melvin Ejim. I remember thinking to myself, "Have the Cyclones finally arrived? Are we for real?"

When the final buzzer sounded, even though Cyclones had fallen to the Longhorns, Iowa State fans left that game with a sense that things were about to change.

Next year, Iowa State faced another tough quarterfinal match up against the Oklahoma Sooners, and seemed to be headed for yet another tournament loss. The 3-pointers weren't falling, and the spirit of Cyclone fans in attendance dropped with them as their team faced a 10-point deficit for almost the entirety of the game.

Suddenly in the closing minutes of the second half, and almost single-handedly on the back of Will Clyburn, the Cyclones flipped the script. A Chris Babb three with 30 seconds remaining sealed the victory, and Iowa State had finally gotten over the Big 12 Tournament hump. A loss to Kansas would follow, but that would only set the stage for the upcoming tournament.

The 2013-14 Cyclones entered the Big 12 Tournament with the a top-25 ranking, and the expectations of making a run at the tournament championship. A tough matchup with Kansas State waited in the quarterfinals, and boy was that game fun to watch. The Cyclones had once again earned a trip to the semifinals, and had another date with the Kansas Jayhawks.

A massive crowd filled the Sprint Center and crowded into the surrounding bars to watch what promised to be a terrific game. The atmosphere inside the arena was simply incredible. After falling to the Jayhawks twice that season, the Cyclones would not be denied. Iowa State, a bloody Georges Niang included, was headed to the Big 12 Championship after taking down KU. 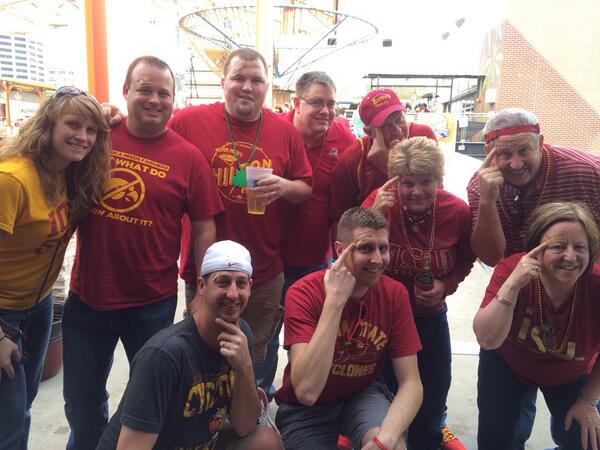 That Saturday night match-up with the Baylor Bears was a sight to behold. It appeared the entire city of Ames (hell, the state of Iowa) made the drive to Kansas City to pay hundreds for a tickets or to join the mob of cardinal and gold outside the arena. The Sprint Center literally became Hilton South that night, and propelled the Cyclones to their first Big 12 Tournament Championship since the incredible Fizer-led team so many years ago.

I asked our resident Big 12 Tournament connoisseur, cylentbutdeadly, about the celebration that took place afterwards:

"The championship day against Baylor was insane. It was Saturday, 75 degrees, we had just beat Kansas the night before and the entire city was dressed in cardinal. Everyone was wearing a bandaid over their right eyebrow in solidarity of the charge Georges took the night before, and there wasn't a single Jayhawk in the P&L. We got hammered all damn day and there were five Baylor bros that were heckled and ridiculed mercilessly. The single most awesome Cyclone experience I've ever had."

Roughly one year later, the Cyclones returned to Kansas City as the 2-seed, rolling behind the momentum of a historic comeback against Oklahoma in Hilton Coliseum. Who would have predicted that game would set the stage for one of the most unbelievable, stunning, and downright magical runs in tournament history?

It all started with an unbelievable shot by Monte Morris, who hit a pull-up jumper to cap a 12-0 run as time expired to give the Cyclones the victory (and the lead for the first time) against the Texas Longhorns in the opening game of ISU's 2015 Big 12 Tournament.

The 'Clones then topped that game, in front of a packed and frenzied crowd, by mounting yet another comeback against the Sooners, with the game ending in a wild scrum that featured Ryan Spangler missing a gimme lay-up, sending the Cyclones back to the championship yet again. That night - on into the early morning - the Cyclone party in Kansas City was on.

Getting back to the championship game meant a title battle against, who else, the Kansas Jayhawks. The Sprint Center was an even split of Cyclone cardinal and Jayhawk blue, and everyone in attendance knew they were in for a special night.

The atmosphere in the Power & Light District for the pre-game ISU pep rally was, quite honestly, one of the most breathtaking sights this fan has ever seen. Jamie Pollard joining in from his hospital bed (he'd suffered a heart attack just a couple days prior) was as touching a moment as you'd ever experience.

The game began and ended much like the previous two, with the Cyclones falling behind and in need of a dramatic comeback. And wouldn't you know it, they found a way to win the whole damn thing once again.

So... Where does this year's Iowa State team fit into this picture?

This season has been defined by highs and lows, both on and off the court. Replacing an ISU legend at head coach in June is a tall task for any coach, especially with the sky-high expectations a preseason top 10 team brings. There were on the court stumbles and off court suspensions. Beautiful victories over Kansas and Oklahoma, and gut-wrenching overtime road losses. To some it was a season of missed opportunities, and to others the only thing that matters are the two tournaments in March.

Regardless of which camp your thoughts occupy, there is a consensus that this team is incredibly talented, explosive on offense, and a nightmare to prepare for. And when it comes to the Big 12 Tournament, above all else, these players know how to win in Kansas City.

That leaves you, the fans, with only one option: to prepare, once again, to turn the Sprint Center into Hilton South. It's time for a spur of the moment road trip to KC with your family and friends. Time to transform the Power & Light District into a sea of cardinal and gold yet again. To occupy Oklahoma Joe's, Jack Stack, and Arthur Bryant's until they are forced to cart you out in a wheelbarrow. To drink as many $10 beers as you can stand (or until you literally cannot).

For the past two years, the Big 12 Tournament has been an incredible ride - one shared by Cyclone fans young and old, by folks from every corner of the state of Iowa, and people from all across the country. It's up to the fans to bring the magic back once more. 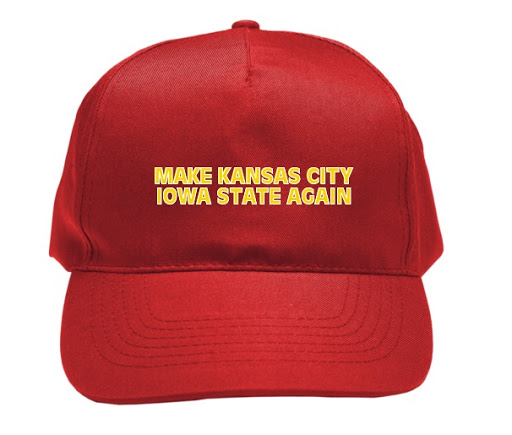