Many of you have been to a Tailgate Tour stop, but with Matt Campbell on board, this won't be your typical Cyclone pep rally... Sit back and let CYHusker and Ted Flint tell you all about it.

The arrival of Matt Campbell has changed the typical format of the Tailgate Tour. This once-family themed, quiet pep rally has been flipped on its head. Having heard the rumors of wild goings-on at these events, the WRNL staff decided to head up to Clear Lake to investigate.

The following is a completely accurate, detailed description of how this event unfolded.

John Walters: "Good afternoon everybody, this is John Walters coming to you live from Clear Lake, and I've got Brent Blum along for the afternoon as well. Tonight we have a very special event. In honor of how much the new coaching staff loves WWE, they've constructed a wrestling ring for this stop of the Tailgate Tour instead of a stage. This ring will be used when Jamie Pollard presents the Cy-Hawk Trophy to coaches Matt Campbell and Steve Prohm here this afternoon.

Blum: "It looks like the trophy will be staying with the good guys, John"

The lights dimmed... smoke filled the room... then the music hit: 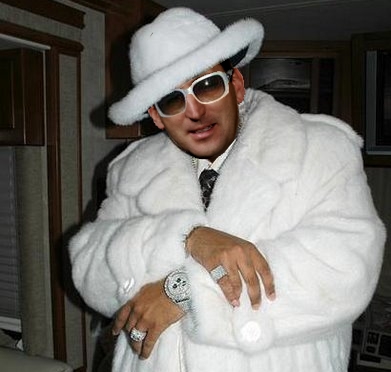 Pollard eases his way on up to the stage, trophy in hand, leaving a trail of dollar bills in his wake. Fans crane their necks to catch a glimpse of the trophy, as most can't remember which lame design they are using these days.

Walters: "I believe it is some kind of dead animal, Brent. Shhh, it appears that Jamie is going to speak."

Jamie Pollard: "For those of you wondering about my attire, from now on I wish to be known as JP Money. Not formally, of course. Just around you fans, who are absolutely the best in the country! Tonight is a special night, a very special night indeed. You see tonight, for the third straight year, Iowa will once again be known as the "Cyclone State."

Blum: (Yelling over the noise of the crowd) "Man, this crowd sure loves that, eh John? I love it too, almost as much as I love Hollywood Higgins."

Walters: "JP Money? Where is this coming from... Does he know something we don't? Brent, I wonder if this has any ties to potential Big 12 Expansion..."

Blum: "Shhhh John, it looks like Pollard is speaking again. Let's listen in."

Jamie Pollard: "First off, I'd like to thank all of our teams who beat the Hawkeyes this past year. Second, I'd like to thank last year's football team and coaching staff. Without them, winning the tiebreaker over Iowa would not have been possible. You know, it's a great day to be a Cyclone fan, as that's the only way you're ever going to see this trophy for an entire year".

As Pollard delivered his last line, the crowd reached a fever pitch. Garbage cans in the immediate area began to spontaneously combust, ISU Athletics decided on the spot to make a t-shirt commemorating this great tailgate tour stop, and a chorus of Sweet Caroline broke out out.

Walters: "Jamie Pollard has it STUCK ON AUTOMATIC! LISTEN TO THIS CROWD! The Cyclones sure do love keeping that Cy-Hawk Trophy for another year, don't they Brent?"

Blum: "This crowd is bananas, and we haven't even brought out Campbell and Prohm yet!"

Walters: "Speaking of the devil, it looks like Campbell is set to make his appearance right now..."

Pollard: "It is my honor to introduce the head coach of the Iowa State football program, a man who is going to do his best to keep this trophy in Ames again next year... Coach Matt Campbell!"

He. Was. Hyped. Fresh off chugging Advocare and flipping tractor tires out back, the man exuded confidence. As he strolled to the ring, JP MONEY strolled out, a drink in hand, watching his best hire to date (besides Dreamy) bask in the spotlight.

Campbell grabs the mic from Pollard and yells...

Pollard saunters over to the back corner and leans against the wall to watch, a sly grin on his face.

Blum: "That was the most amazing thing I have ever seen. John, let's go to break, it looks like the janitors are gonna need a few minutes to mop up out in the audience."

Though it took a while for the janitors to clean up the mess left by rabid fans after Campbell took the stage, eventually the second member of Campbell's squad was set to join him.

Walters: "Here comes Steve Prohm, and Blum as you know, this is a man who requires little introduction. It's just not his style, you know? He's such a quiet natured guy."

Prohm casually walks out and applies some chapstick. He then drops to one knee, points to an imaginary watch, and yells...

Prohm walked into the ring to join Campbell, and the building went berserk. Beer flew through the air, Jock Jams blared, and old people headed for the doors to start their cars.

Walters: "These men represent everything that is great about ISU athletics."

Blum: "God damn right they do."

Pollard returns to the stage, trophy in hand.

Pollard: "Even though, technically, there was a tie, the bylaws state that the trophy will stay with Iowa State!"

As Pollard goes to hand the trophy to Coach Campbell and Coach Prohm, the lights go out...

Out of nowhere, all three members of the ANF walk up to the ring. In the lead is Fran "Ask an Intelligent Question" McCaffery. Following him is Ricky "Love it or Leave it" Stanzi. And bringing up the rear, silently chomping his gum and looking at his notecards, is Kirk "The Punter" Ferentz.

Stanzi jumps into the ring and rips the mic away from Pollard.

Stanzi: "Enough of this tie bullshit, we will settle this in the ring like real men. Us vs you. Time to step up, Cyclowns."

Pollard: "While I would run circles around you three, my heart won't allow it. And 2 on 3 isn't exactly fair..."

Campbell rips the mic away from Stanzi.

The bell rings. Somehow, Hollywood Higgins magically appears from the ringside monitor and prepares to officiate.

Walters: "It looks like we're ready to rumble here in Clear Lake. This is for all the marbles, all the shucks of corn, all the bacon, all the... Blum, are you alright?"

Blum is slumped over on the floor, apparently passed out due to Hollywood Higgins' presence.

Walters: "Alright Blum, never mind. And HERE WE GO. It looks like all five men are attacking each other at the same time. Are there are no rules? Apparently so. This is pure chaos, Clone fans."

Fran sneaks out of the ring. Blum wakes up.

Blum: "What on earth is Fran looking for??"

Meanwhile back in the ring, Campbell has taken the gum from Ferentz's mouth and is mashing it into his hair. Stanzi has Prohm down in the corner, and is kicking him in his gut. He then turns around and tries to start a USA chant. While he is distracted with his chant, Prohm gets to his feet.

Walters: "Is Prohm applying chapstick to his elbow?? Oh he's going after Stanzi!"

Stanzi turns around just in time to get a chapstick covered elbow to the face.

Blum: "Stanzi is down!!! Ouch, that's gotta hurt, he could be down for the count, John."

Fran slides back into the ring.

Fran nails Prohm with a chair, and continues to slam it down on his head.

Blum: "BY GAWD HE IS TRYING TO KILL HIM!! Now he's going after Higgins!"

Fran smacks Hollywood with the chair, and knocks him out.

Walters: "The situation looks bleak: Campbell is crawling around the ring, and Fran and Ferantz are exchanging high fives. Brent, what's your take on the situation? Brent?"

Suddenly, Blum hops into the ring and rips off his shirt to reveal a WWE official's shirt. He begins to give Prohm a 3 count, but blows right past 3 seconds, and goes all the way to 21.

Fran: "THIS IS AN OUTRAGE. I HAD HIM FINISHED, NO WAY HE CAN COME BACK FROM BEING DOWN 21"

Prohm and Campbell get to their feet and face down ANF.

BOOOOOOOOOOOOOM. The room fills with dust and debris. Out of nowhere, a tow truck smashes through the arena wall and crashes into the ring. The shadow of a muscular man is seen jumping out of the truck.

Jantz dives into the ring, and with his lightning-quick kung fu skills learned from the monks he has been living with high in the Sierra Nevada mountains, quickly disarms Fran.

Steele: "Fran, you need to calm down."

Fran swings back his leg and kicks Jantz in the balls. Jantz takes it like a champ, and returns a kick to Fran's family jewels. .

Steele: "Don't you know that I've got balls of Steele?"

Campbell and Ferentz exchange looks. Before Ferentz can attack, Campbell kicks him in his stomach, hits his own variation of the Stone Cold Stunner, and drops Ferentz, shooting his gum across the ring. Campbell goes in for the pin.

Walters: "This one should be over... Finish him, Blum!"

Walters: "IT'S OVER, THE CY-HAWK TROPHY STAYS IN AMES! LISTEN TO THIS CROWD! UNBELIEVABLE!"

Pollard gets back in the ring and raises both Campbell and Prohm's hands high. He then looks around for Jantz, but he is nowhere to be found - he has disappeared into the night once again.

Big shout out to Ted Flint (@TedFlintKansas) for the help with this article.