As we begin to approach the quieter portion of the athletic year, it's time to fire up those realignment rumors!

Folks, first just let me say that I'm sorry. It's been a couple months since I've contributed to WRNL, with previous articles on BYU and New Mexico, and a lot of events have taken place. With the Big 12 and its presidents openly squabbling over whether or not to take the plunge and expand, university presidents have been openly advocating for membership. With rumors swirling about the potential for Big 12 expansion, we’ll be taking a look at another candidate for membership: Cincinnati.

What the hell is a Bearcat? Well, here’s the official story from the Cincinnati athletic department:

"The University of Cincinnati Bearcats were born on Oct. 31, 1914. The occasion was a football game with the University of Kentucky Wildcats, a star UC player named Baehr, a creative cheerleader and a talented cartoonist. During the second half of that hard-fought football game, UC cheerleader Norman "Pat" Lyon, building on the efforts of fullback Leonard K. "Teddy" Baehr, created the chant: "They may be Wildcats, but we have a Baehr-cat on our side." The crowd took up the cry: ‘Come on, Baehr-cat!’ Cincinnati prevailed, 14-7, and the victory was memorialized in a cartoon published on the front page of the student newspaper, the weekly University News, on Nov. 3. The cartoon, by John "Paddy" Reece, depicted a bedraggled Kentucky Wildcat being chased by a creature labeled ‘Cincinnati Bear Cats.’

There you have it folks. But after doing a little research, it turns out that there are actually real Bearcats too The Red Panda, an animal native to China, is referred to in Chinese as "Xiong-Mao" which literally means "Bearcat." Personal opinion, glad they stuck with Bearcats. Cincinnati Red Pandas just doesn’t have the same ring to it…

Situated in the Southwest corner of Ohio, Cincinnati was the first major city to be centrally-located within the U.S. Currently, the Queen City maintains a population of just under 300,000, about halfway in size between Des Moines and Omaha, for reference.

However, the Cincinnati-metropolitan stretches past Ohio to Indiana and Kentucky, and encompasses more than 2 million people. The common consensus is that West Virginia is sitting in the corner of the party and needs a friend to hang out and take turns doing pulls of rubbing alcohol with (Bring it, The Smoking Musket).

Because Cincinnati is exactly 600 miles from Ames and nearly 1,200 miles from Austin, it is naturally located as a regional rival and travel partner with West Virginia. So while the Bearcats are not located in the Big 12's backyard, it's not out on an island like some of our other candidates. (Or actually an island, sorry Hawaii.) According to collegedata.com, admission to UC was described as being "moderately difficult." Cincinnati maintains roughly a 75% admissions rate, which isn’t bad for a public university, and a total undergraduate population of roughly 24,400 students. Popular majors at Cincinnati include Business, Engineering and various Health-related majors due to the prestige of the school of medicine.

Since 2011, U.S. News & World has ranked Cincinnati as a "Tier One" university. It is considered a prestigious research university, earning a "Space-grant" designation due to its contributions to the outer-space field as well as being a "NSA Cyber Operations Center of Excellence." (I don’t know what that means, but I have a strange feeling somebody is checking my browser history right now…)

Bearcat football could best be described as a program on the rise. Coming from humble MAC-origins half a century ago, Cincinnati is on the cusp of earning a Power 5 invite, and for good reason. Since 2007, Cincinnati has made a bowl game each season except for 2010, with a total record of 82-35. Keep in mind that two of those bowl games were the Sugar and Orange Bowls, and that their .701 winning percentage would be the 16th highest in the nation (Ironically, tied with this program).

In the past, Cincinnati has been noteworthy for developing head coaches who would eventually move on to high profile programs. Examples include Mark Dantonio (Michigan State), Brian Kelly (Notre Dame), and Butch Jones (Tennessee).

Cincinnati is currently led by Tommy Tuberville, a former head coach at Ole Miss, Auburn and Texas Tech, who actually left Texas Tech to accept the position. The Bearcats have produced plenty of NFL talent in the past few years, such as Pro Bowlers Travis Kelce, Connor Barwin, Jason Kelce, Trent Cole and Kevin Huber. (Kickers are people too.) Cincinnati already schedules Power 5 schools very regularly, and there is no reason to believe that they couldn’t immediately compete at the Big 12 level. (Which is still more than we can say about Kansas)

For much of its existence, Cincinnati basketball has been considered the pride of the university. Since its inception in 1901, the Bearcats have racked up 1717 wins, two national titles, 6 Final Four appearances and 30 NCAA tournament appearances.

Cincinnati is considered by many to be one of the top mid-majors, and has been led by coach Mark Cronin since 2006. The program boasts 41 All-American selections, and has produced numerous NBA players, including Lance Stephenson, James White and the legendary Oscar Robinson. If there is any knock against the Cincinnati program, it would have to be a lack of consistency that many candidates can claim. Droughts in the 1980s and mid-2000s, combined with having spent time in 5 different conferences over the past 25 years, make up the only true knock against the Cincinnati. Oh, and there's also this little incident... 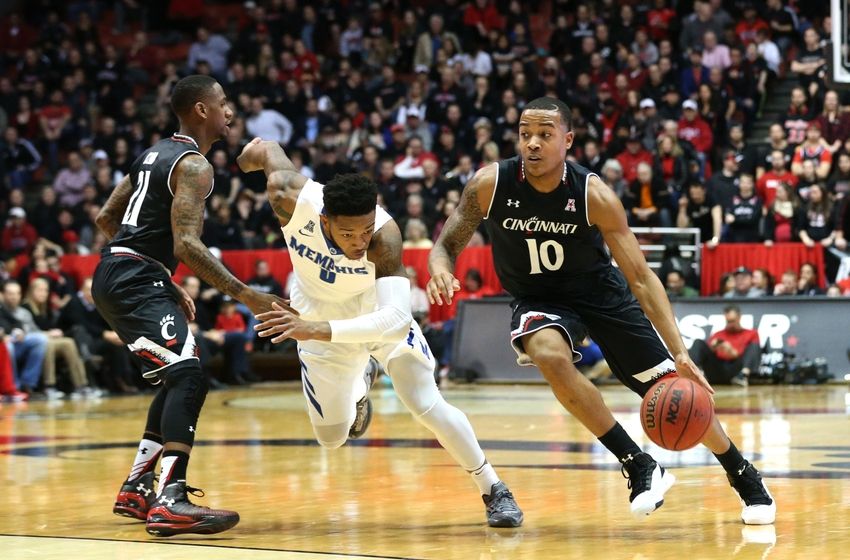 Cincinnati has been playing football at Nippert Stadium in some capacity since 1901. The stadium was named in 1924 after former UC player James Gamble Nippert died of an illness contracted in a game. Nippert received a small cut on his ankle, which became infected from the droppings on the field from a pre-game chicken race. Nippert’s grandfather, one of the founders of Procter & Gamble, would donate funds to complete the stadium and install a locker room in his honor. None of this is really important, but maybe it’ll inspire some good chants in the student section.

Thanks to the efforts of the administration and donors, Nippert Stadium recently underwent an $86 million renovation, which required the Bearcats to spend the entire 2015 season in nearby Paul Brown Stadium. Stadium capacity was raised to 40,000 this fall, along with a new press box and other amenities. Nippert Stadium has been known as one of the most fan-friendly stadiums in the country, due to the proximity of the stands to the field, and the atmosphere has been described as a "Mini-Death Valley."

The Cincinnati men’s basketball program has been playing at Fifth Third Arena since 1989. Originally known as Myrl H. Shoemaker Center, the structure was renamed in 2005, but fans still often refer to it as "The Shoe." The Bearcats maintain a record of 349-74 at the arena, and it has also been at times considered one of the most hostile arenas in the country.

Even with all of the money committed in the renovation of Nippert Stadium, Cincy isn't done investing in its athletic program. The 13,000 seat arena is poised for receiving an $87 million renovation within the next 4 years. The hope that the continued commitment to the school's athletic department, especially the Fifth Third Arena renovation, will eventually help attract membership within a Power 5 conference.

Ohio is one of the nation’s top recruiting hotbeds, but Cincinnati is far from the largest name-brand. Despite being in Ohio State’s shadow, Cincinnati still has the potential to grab solid prospect each and every year, with the 2015 and 2016 classes ranked 48th and 78th respectively. According to scout.com, the state of Ohio produced over 150 Division 1 caliber prospects in 2016, of whom Cincinnati was able to recruit three. (The same number Coach Campbell was able to bring with him to Ames!). With the recent renovations, and the excitement a move to a Power 5 conference would bring, Cincinnati could potentially tap into this goldmine as they prepare to step up to a new level of competition.

As a school within a major metropolitan area, the Bearcats already have to compete for attention with the Bengals and the Reds. Combine this with the fact that they lag far behind Ohio State in profile, and one would think that attendance and fan support would be an issue. As recently as 2010, Cincinnati struggled to average more than 36,000 fans a game, and moved several high profile games to nearby Paul Brown Stadium in hopes of drawing better crowds.

In 2015, with a newly renovated stadium and building excitement around the program, UC was able to set a new attendance record. Playing in the 40,000 seat Nippert Stadium, the Bearcats averaged nearly 37,000 and including sellouts against Miami (The Florida One) and UConn (Who really seems to like trophies). Last, but certainly not least, they have a SB Nation site (Down the Drive). I'm thinking plenty of Ohio staples like Skyline Chili and Great Lakes Craft Beer. The Campus Gridiron Tailgate, also known as "The Grid," is the official tailgating section of campus. There have been multiple movements to open up more areas for game days, but the administration is holding tight. Tailgating scene isn’t nearly as large or rowdy as it is at Jack Trice, but it's still more of a party than you’ll ever see at another Big 12 candidate…

Cincinnati brings the most well-rounded package to the Big 12. It may not have the name-brand recognition UT is holding out for, but UC is arguably the top prospective member. Its status as a large research-institution combined with its geographic location and commitment to building its athletic program make it an ideal fit in the Big 12. The Bearcats' recent history of success shows the potential the program contains, and the bump in prestige that comes with Power 5 conference membership will only continue this program's climb to even greater heights.

How would you feel about Cincinnati joining the Big 12?