Jack Trice was the first African American to play at Iowa State but do you know the second? His name, as is in the title, is Holloway Smith. Smith was born November 19, 1896, in Spottsville, Kentucky. Smith played a single year at Michigan State in 1925, and came to Iowa State in 1926. He came from Michigan State to persue his bachelor's degree in agricultural education.

Like Trice, Smith was an offensive tackle with a huge frame at 6'4" and 220 lbs. Being a man of color, Smith would not be able to play in some games due an agreement with the Missouri Valley Intercollegiate Athletic Association with southern opponents disallowing play of players of color. This agreement meant that Holloway couldn't play in three games in 1926, and in 1927 he couldn't play against the Missouri (then)Bengals despite being 3rd team All-MVIAA. According to the Des Moines Register from October 22, 1926, Smith was one of the "Stars for Cyclones" as seen in the clipping below.

As the article on Cyclones.com states, "Iowa State's African-American players who traveled to Missouri in 1952, would still have to sleep in a segregated funeral parlor rather than the hotel where the rest of the Cyclones were staying." Yikes. Unfortunately, without Smith's presence on the line the 1-1-1 Cyclones dropped to 1-2-1 following the 3-7 loss against Missouri.

Luckily the following week's game at Nebraska, Coach Bearg seemingly had no problem that Smith was black, but he did find issue with something else, the cast on Smith's broken hand. 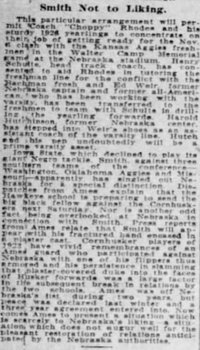 "Smith's presence in the Ames lineup would not infringe upon a conference rule and I am sure there is absolutely nothing to the protest suggestion." said Bearg "The only concern Nebraska has to Smith is that the story from Ames that the big black boy will go into the game with one of his hands encased in a plaster cast. Unquestionably, as I view it, that plaster cast business would constitute a violation of the rules. If Smith goes on the field with that hand armor I shall refer the situation to the officials and abide by their decision. The Cornhuskers have no fear of Smith. I am told he has plenty of size, but after we jam in a few plays over his position he may not be so terrifying."

At this time in college football history, the home team was to hire and pay its own officials. This was also the first meeting between the Cornhuskers and Cyclones since 1923, not playing in 1924 and in 1925 because of some bad blood.

At this time, Iowa State was 3-3-1 riding high on the road for the season finale at 5-2 UCLA in the Coliseum. Up until this game, the (then)Grizzlies had outscored their opponents 153-47. 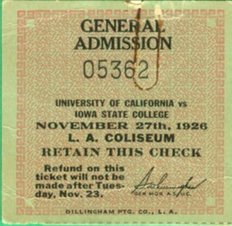 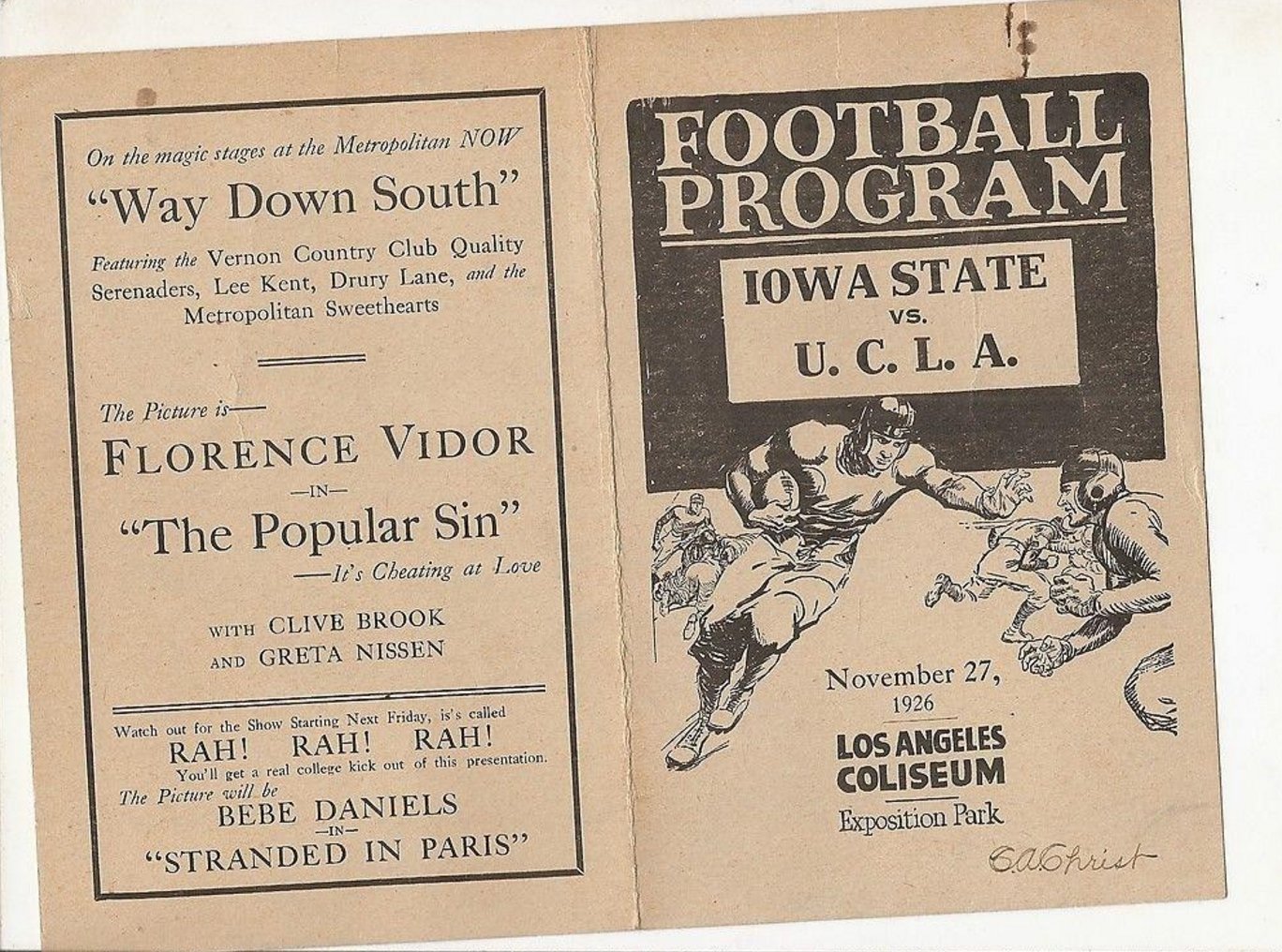 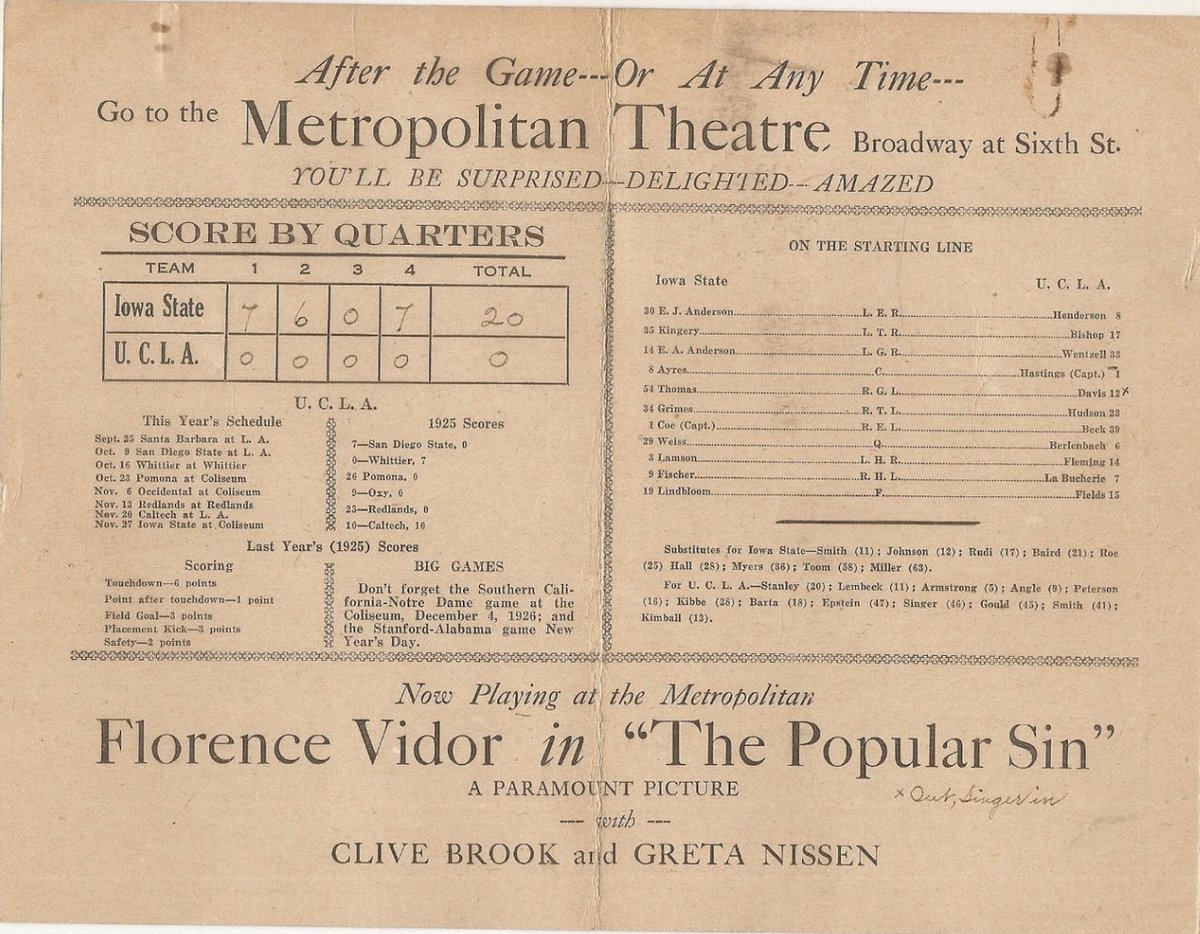 Holloway is listed as a substitute as "Smith (11)". 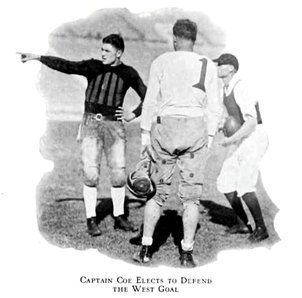 The wet afternoon cleared up by game time, and the sun peeked through the rain clouds. Iowa State won the coin toss and elected to kick. Iowa State had a quiet first quarter, but went on to score 13 points in the second quarter. The Cyclones ended up scoring another touchdown in the last quarter of play, making the game 20-0. 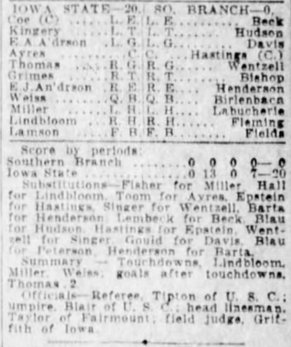 After this game, UCLA decided to change their team name from the Grizzlies to the Bruins.

Holloway and his teammates were welcomed home by large crowds at Ames City Hall, from which a parade took the team to State Gym where a huge crowd had jammed itself to witness the campus arrival of the squad.

The 1927 team went 4-3-1, and the only game Smith could not play in was the Missouri game, which, again, Iowa State would go on to lose 6-13. The lone tie came against the eventual national champion Fighting Illini. Not bad for a Cyclone team that in 3 seasons would go on and finish 0-9-0. Holloway would end up graduating in 1928, and below is the last time he was featured in the Des Moines Register until September 3, 1995.

Holloway Smith as seen in the 1928 Bomb

Post graduation, he became a teacher in Marianna, Arkansas. By 1935, he moved to Louisville. In 1940, he was still teaching, but now in Pine Bluff, Arkansas, he also worked with the National Youth Administration, brought about by FDR's New Deal, was a way to get unemployed youth involved with activities. By the time the year 1951 rolled around, Smith had gone back to California where he managed a Ella's Southern Kitchen Restaurant. His last role there in 1957 was a cook. His last earthly residence was in Reno, Nevada, where he passed away on January 16, 1970 at the age of 74. 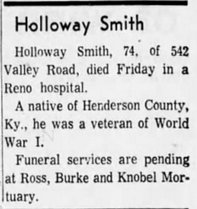