Share All sharing options for: 100 Things Cyclone Fans Should Forget Before They Die: Julian Edelman Singlehandedly Beating ISU in 2007

The following is the official recap from Iowa State.

J.J. Bass became the first ISU running back since 1989 to debut with over 100 yards on the ground, but the Cyclones took a 23-14 loss to Kent State Thursday night in front of 47.313 in Gene Chizik’s debut as Iowa State head coach at Jack Trice Stadium.

Bass ran for 106 yards in the first half and finished with 133 yards on 22 carries and a touchdown to lead the Cyclones (0-1). Bret Meyer completed 14-of-23 passes for 148 yards. Todd Blythe had a team-high 65 receiving yards and a touchdown. Chris Singleton and James Smith each intercepted a pass for ISU.

Kent State’s Eugene Jarvis ran for 116 yards on 25 carries, including one touchdown, while quarterback Julian Edelman scored two touchdowns, one through the air and one on the ground. He threw for 161 yards and rushed for 81.

“I thought that there were times when we showed some flashes and did what we hoped to do,” said Chizik. “There were a lot of first-game blunders. No one area was to blame. We have to work through this as coaches. There are a lot of things we have to work through that are correctable. It’s a very hard way to start the season, but our guys are very resilient. We have to come back and find out how to solve some problems. We’ll regroup in the morning and come back.”

After a scoreless first 25 minutes of play, the teams ended the half with a flurry of scoring. The Golden Flashes struck first as Edelman completed three consecutive passes for a combined 69 yards in less than a minute, including a 42-yard touchdown pass to Leneric Muldrow, who went untouched down the left sideline for the score. The extra point attempt was blocked, giving Kent State a 6-0 advantage.

The Cyclones had the immediate answer with a seven-play drive covering 56 yards in three minutes and 11 seconds. This time, ISU featured a balanced attack. Bass ran for 29 yards on the drive, including a 13-yard run to pay dirt, while Meyer passed for 19 yards. After the Bret Culbertson extra point, the Cyclones led 7-6. 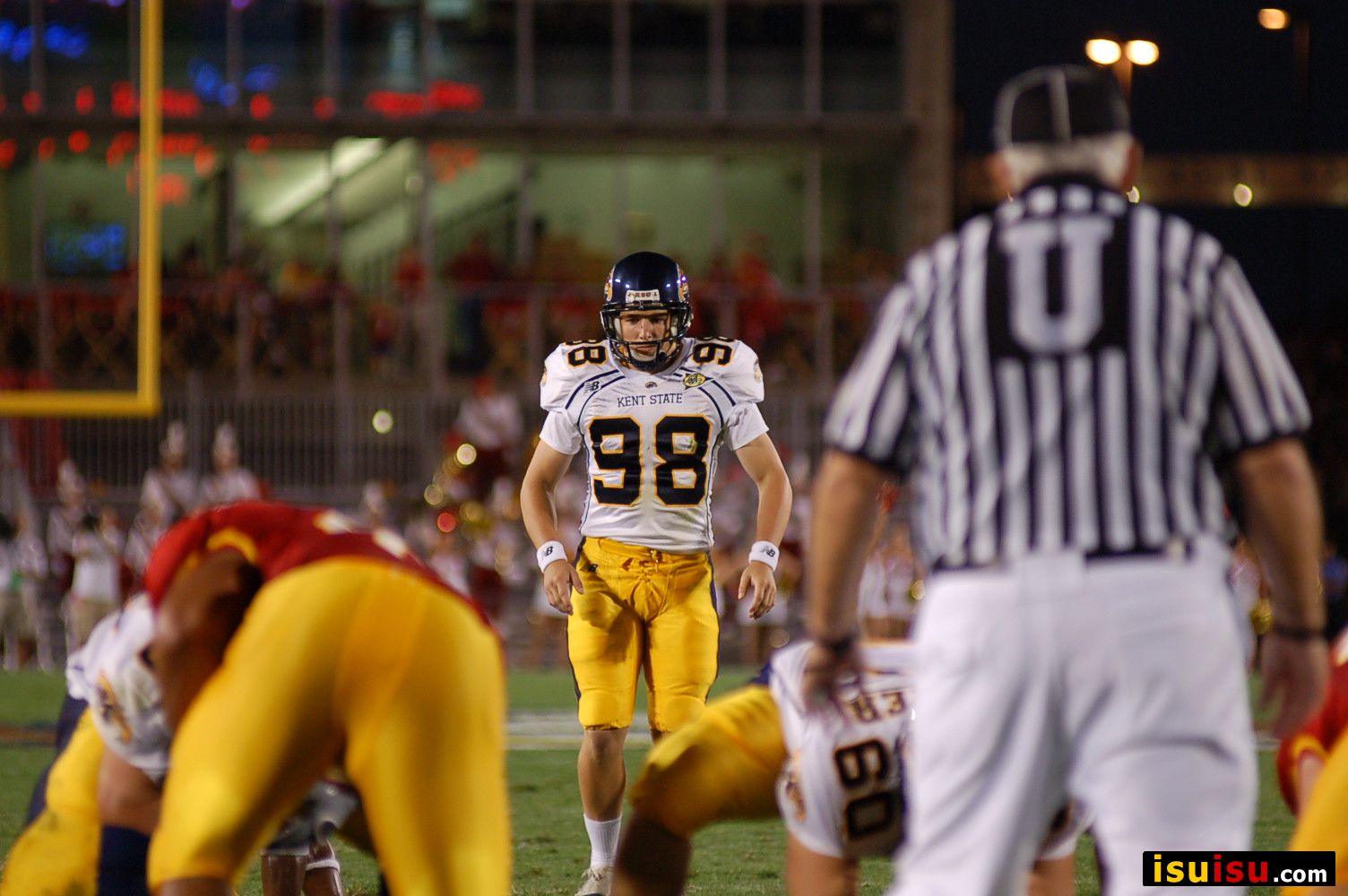 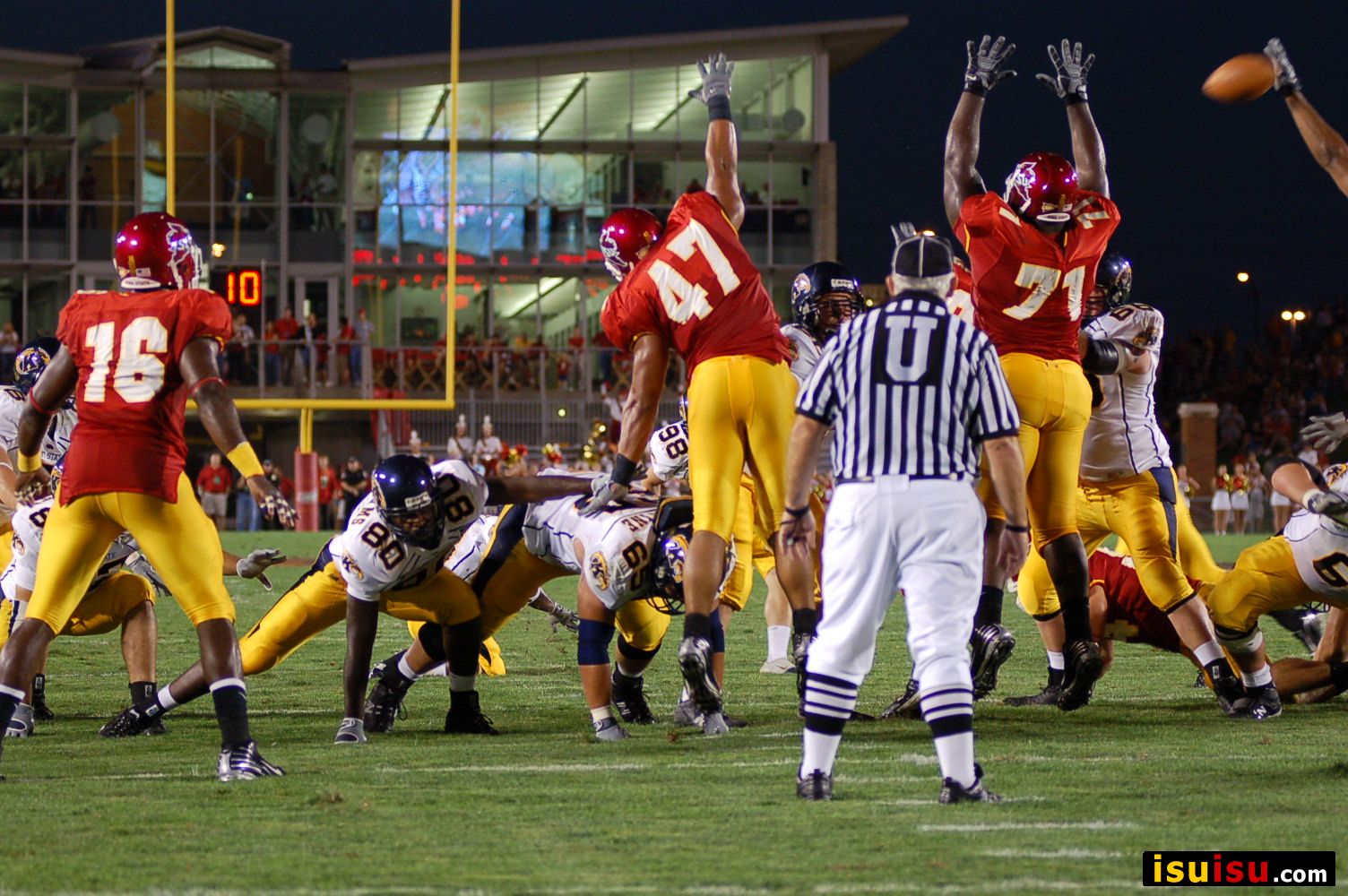 Kent State answered with the final blow before the half, as Nate Reed connected on a 24-yard field goal with two seconds remaining, giving the Golden Flashes a 9-7 lead heading into the locker room.

After Allen Bell returned the opening kickoff of the second half to the ISU 42-yard line, Meyer and Blythe connected on consecutive completions of 14 yards. Three plays later, Meyer found Blythe at the back of the end zone with a pass down the right seam for a 16-yard touchdown strike. The Culbertson extra point put the Cyclones on top, 14-9.

The Cyclones temporarily squashed some Kent State momentum when James Smith intercepted an Edelman pass in the end zone. But Iowa State faltered on offense, going three-and-out before Mike Brandtner was forced to punt.

The Golden Flashes then took possession and went on a deflating 12-play, 56-yard touchdown drive covering four minutes and 23 seconds.

The final blow was a two-yard Eugene Jarvis run. With the extra point, Kent State retook the lead, 16-14.

Meyer was intercepted by Brian Lainhart on the next ISU possession, with Lainhart returning the pick 50 yards to the Cyclone 8. Edelman scored two plays later on a quarterback sneak to put Kent State up, 23-14, with 50 seconds left in the third quarter.

After the teams traded punts, Culbertson’s 47-yard attempt from the right hash hit the left upright and fell back into the field of play with 5:40 left in the game.

Julian Edelman had the following to say, “This is a huge win for our program.” “We set the foundation last year. We weren’t content with six wins, but it was a good start.”

Jared’s note: Iowa State only had 38 yards in the final quarter. This was Kent State’s first win over a BCS program since beating the Jayhawks in 1987.

That being said, Iowa State should never, ever lose to Kent State. To be honest, a loss to Kent State is worse than a loss to UNI, and you already know how we feel about that.