The 1990s becomes the decade of the offensive line and running backs for professional Cyclone footballers. A former head coach is also included.

The 1990s. The era of Walden has risen and fallen, and the McCarney dynasty is starting its meteoric rise at the end of the decade. Below are scenes, magazines and other things found related to Cyclone Football in the 1990s.

Sims made his way onto the starting Cyclone offensive line as a true freshman in 1986, and would start 44 games in his Cyclone career. He paved the way for both Joe Henderson and Blaise Bryant to have more than 1000 yards in their own respective seasons. In 1989, he and Gene Williams were part of an offensive line that helped the offense have almost 428 yards per game.

Also in 1989, he would be a player in the Blue-Gray All Star Football Classic.

In 2006, he was inducted into Iowa State’s Hall of Fame and in 2017 the Sun Sentinel ranked him the seventh best Dolphin lineman of all time. 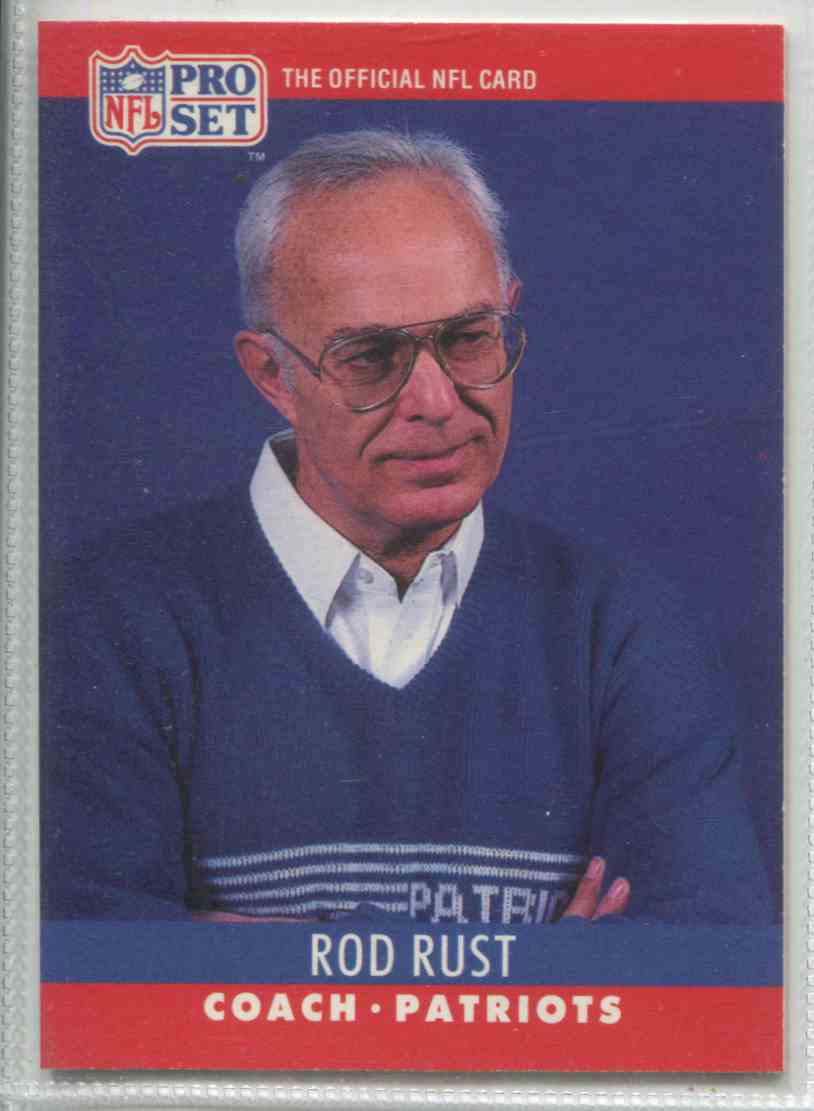 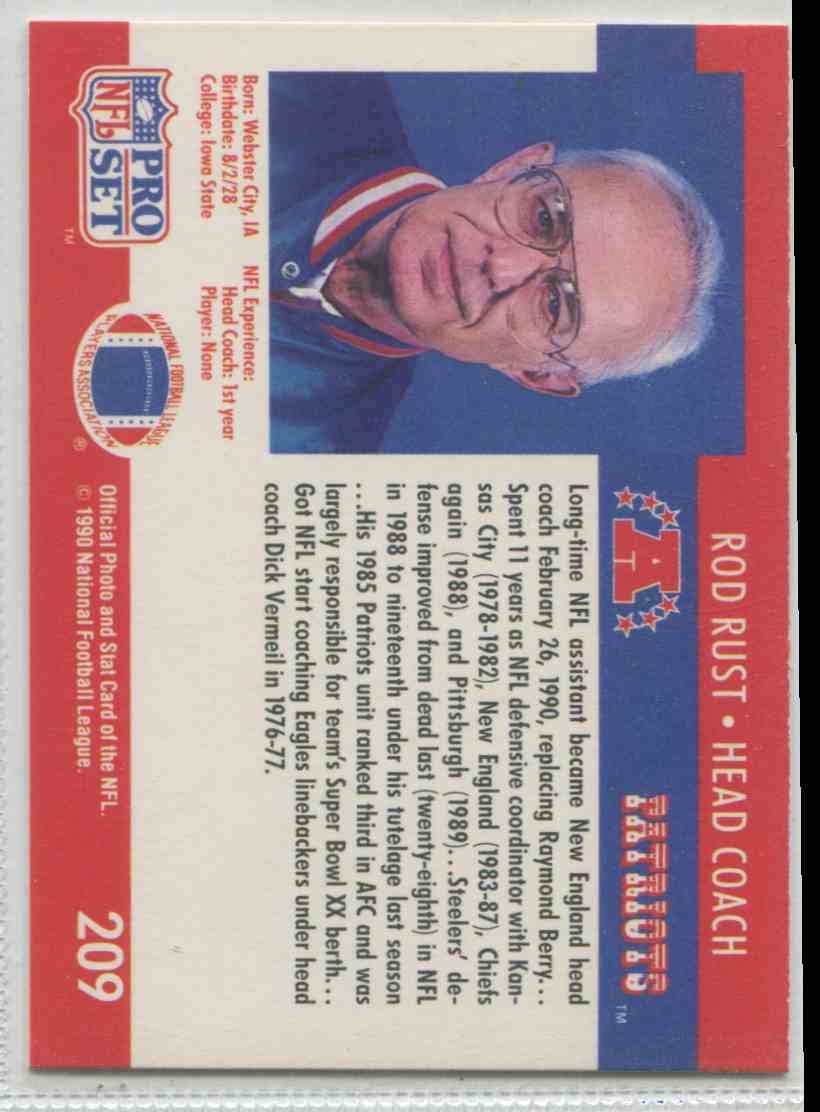 Following a 1-10 season in New England, Mr. Rust spent the 1991 season away from coaching. However, from 1992-2005*, he was back to coaching. (*He was hired as the defensive coordinator for the Ottawa Renegades in 2006, but the team suspended operations Spring 2006.)

Marcus finished his career starting all 27 games he played in for Seattle (2001-02).

While at Seattle, he accumulated (from the prior stats) two interceptions, seven passes deflected, two fumble recoveries, 115 solo tackles/37 combined tackles and his only two tackles for loss.

On February 6, 2019, he was named the defensive backs coach for the Arizona Cardinals.

Before coming to Iowa State, the Creighton Prep (NE) was a stud thrower for the Track and Field team, throwing a discus 154-7 at a meet. During his senior year at Creighton Prep (1986) his football team won the Class A title as seen below.

As a Cyclone (1987-90) Gene paired up with aforementioned Keith Sims to bring the offense to new heights. HIs senior season he would be named First Team All-Big Eight and an All-American by Gannett News.

He also appeared in the 1990 Blue-Gray All Star Football Classic, along with then head coach Jim Walden who was the offensive coordinator of the victorious (17-14) Blue team.

Professionally with Miami, in 1991 and 1992, he played sparingly with the Dolphins, only appearing in 15 games and starting none of them.

His career would have a nice ending in Atlanta (1995-99) and he even got to start in Super Bowl XXXIII.

Friend and one time interviewee for WRNL (Part One and Part Two) was a stud running back for Iowa State in 1989 and 1990. His junior year, the AP would name him a third team All-American and the AP, UPI and Coaches would names Blaise a first team All-Big Eight talent. Scoring 120 points and rushing for 1,516 yards in the 1989 season was a then school record. In his 1989 debut against Ohio, he rushed for 213 yards, the most ever by a Big Eight Conference back in their debut.

The Jets would draft Bryant about halfway through the Draft, unfortunately he didn’t play much in New York and ended up spending lots of time in Winnipeg.

The Blaise Blue Bomber was lethal on the ground and had a record rushing performance of 246 yards against Hamilton, a record that stood about 15 years.

The San Francisco 49ers picked up the former Cyclone quarterback and wide receiver in 1991 from Notre Dame. At Notre Dame, he was Lou Holtz’s recruiting coordinator from 1985-1991. Prior to that, he was a graduate assistant for the Minnesota Golden Gophers in 1983 and 1984.

The 49ers had him as their director of college scouting until 1995, when he would be promoted to director of player personnel. He would stay in San Francisco until 1998, when. . .

The Redskins hired him in 1999 as a general manager, fired him in 2001 and then re-hired him as Vice President of Football Operations in 2002, where he stayed until 2009.

His high school, Albert Lea HS (MN) inducted him into their Hall of Fame in 2010.

Iowa State’s defensive lineman of the year in 1989 accumulated 184 total tackles from 1986-1989. He also found himself with five sacks, 11 tackles for loss (for 53 yards), seven forced fumbles and four fumble recoveries.

This led the eyes of the Professional Spring Football League and Arkansas Miners to pick him up. Unfortunately, the entire series was axed ten days before the start of the season.

Malcolm (and brother Matt who I’ll feature soon) led the 1992 Cyclones in tackles with 162, a mark that is still third best for a season at Iowa State. Had the Ames High grad gone out east and had a similar mark, he’d be second best for single season tackles. Anyways, Malcolm went out and ended his Cyclone career with 19 tackles against #11 Colorado at Folsom Field.

After graduation, Malcolm had a tryout with the Los Angeles Rams, but didn’t make it.

Matt, as aforementioned, is the twin of Malcolm. He played only his freshman and senior year due to focusing on his political science major. He was picked up by the Bears, played in all of their preseason games, but got cut.

Once the CFL picked Matt up, he had an outstanding freshman campaign in ‘94, winning the CFL’s Most Outstanding Rookie Award with his 54 tackles, three interceptions, three sacks, three punt blocks, of his four, returned for touchdown, and three of his four fumble recoveries returned for a touchdown.

In 1995, he had 50 tackles a sack and two interceptions, and started in the Grey Cup game that the Stallions won as seen below.

Weylan Harding (Played and Coached in the Arena Football League)

During the 1991 game against Mizzou, Harding made an interception of the Tigers two point conversion attempt to preserve a 23-22 victory.

Harding bounced around the Arena Football League as a player until 2000, and in 2005 he made his way up to head coach of the New York Dragons after climbing the coaching ladder to get there.

He finished with a 34-34 record while coaching,

A letterwinner from 1992 to 1994, Marc was honored as a senior by being named 1st Team All Academic Big Eight.

Above is a picture of Lillibridge during one of his three preseason games that he played with the Eagles... Before he was cut on August 27, 1995. The Bills signed him in March 1996, but waived him in August.

He was a captain of this Amsterdam team in 1997.

During a July 1997 scrimmage with the Dolphins, Marc finished the day strong with four solo tackles and assisted on three more.

Professionally, he spent his final years (1998 and 1999) in The Big Easy. Where, during a training camp practice, Lillibridge had a herniated disc (his C4 and C5 fused), and had to retire. He now does scouting.

After Iowa State, Coach Criner won World Bowl ‘96 with the Scottish Claymores. He also coached the Las Vegas Outlaws in the XFL.

In 2012, he coached Spartiates d’Amiens and won Championnat de France Élite (top tier of US football in France).

In 2018, he coached Team Nordic U19 in International Bowl IX.

The following stats are from ArenaFan.com, a top website for anyone interested in the Arena Football League.

The North Battleford, Saskatchewan native played at Iowa State from 1993-1996, accumulating 113 tackles and assisted on 71 more in 37 games. He also forced and recovered a fumble.

Troy Davis, a Cyclone (and Heisman runner up in 1996) that needs no introduction, played professionally from 1997-2007.

He accumulated 6,739 rushing yards on 1,283 attempts and scored 36 touchdowns in Canada. He spent most of his time up north with the Hamilton Tiger-Cats.

Kohn was a four year lineman that paved the way for Cyclones such as Chris Ulrich, Marv Seiler, Rodney Guggenheim, oh and Troy Davis.

He was drafted by the Raiders, but never played.

Branch, another Klein High School grad, had 809 rushing yards on 152 carries and 720 receiving yards on 35 receptions. He was suspended on June 13, 1995, and got dismissed ten days later.

He transferred to Colorado State, where, in 1996, he scored 21 rushing touchdowns to go along with 1,279 rushing yards on 228 attempts.

Oliver Ross made his Cyclone mark getting the starting job as a left tackle in 1997.

Professionally, the Cowboys used him in just two games as a tight end for extra yardage situations. He then got sent to the Eagles where he got promoted to the active squad on September 13, 1999, but never played.

From 2005-2007, Ross played his first stint with the Arizona Cardinals, but injuries started to mount up. A broken bone in his hand in 2005, surgery to fix a preseason right knee injury in 2006 and a torn left triceps (which caused him to miss all of 2007) caused him to be released on February 21, 2008.

On June 2, 2008, he signed as an unrestricted free agent with the Patriots, but never played a game with the team and was released on October 28.

May 4, 2009, brought Ross back to the Cardinals, but he never played a game, and was released before the season started in September.

He became a member of the 1998 Miami Dolphins, appearing in 9 games and rushing for a total of six yards. 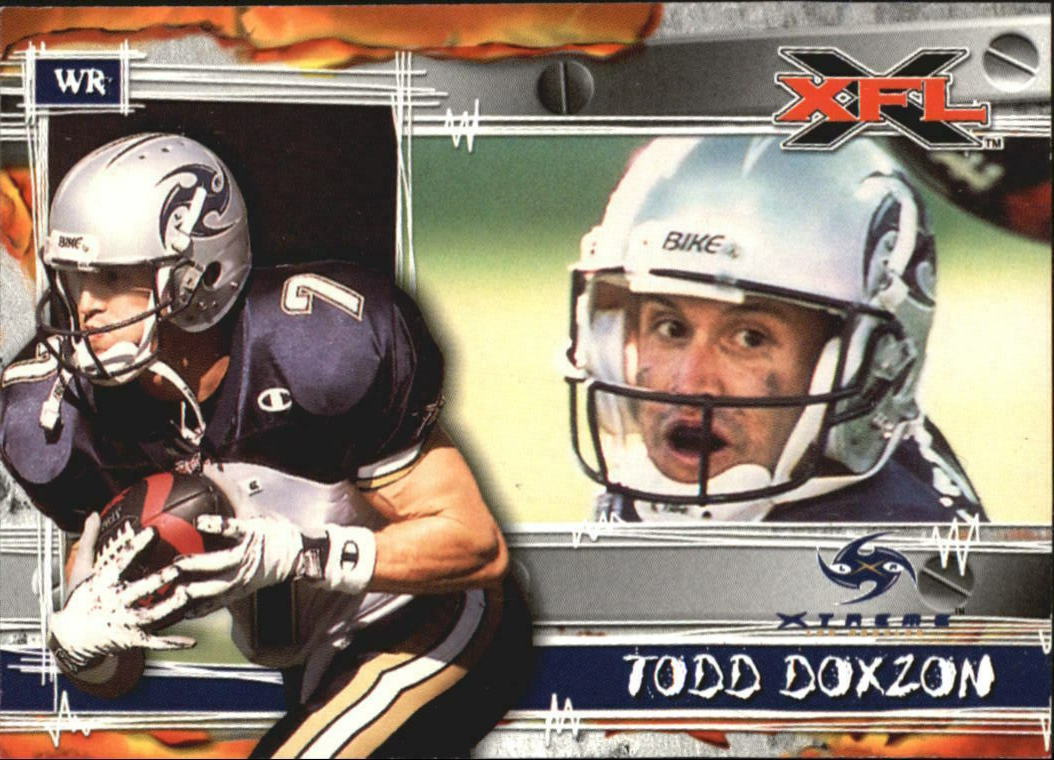 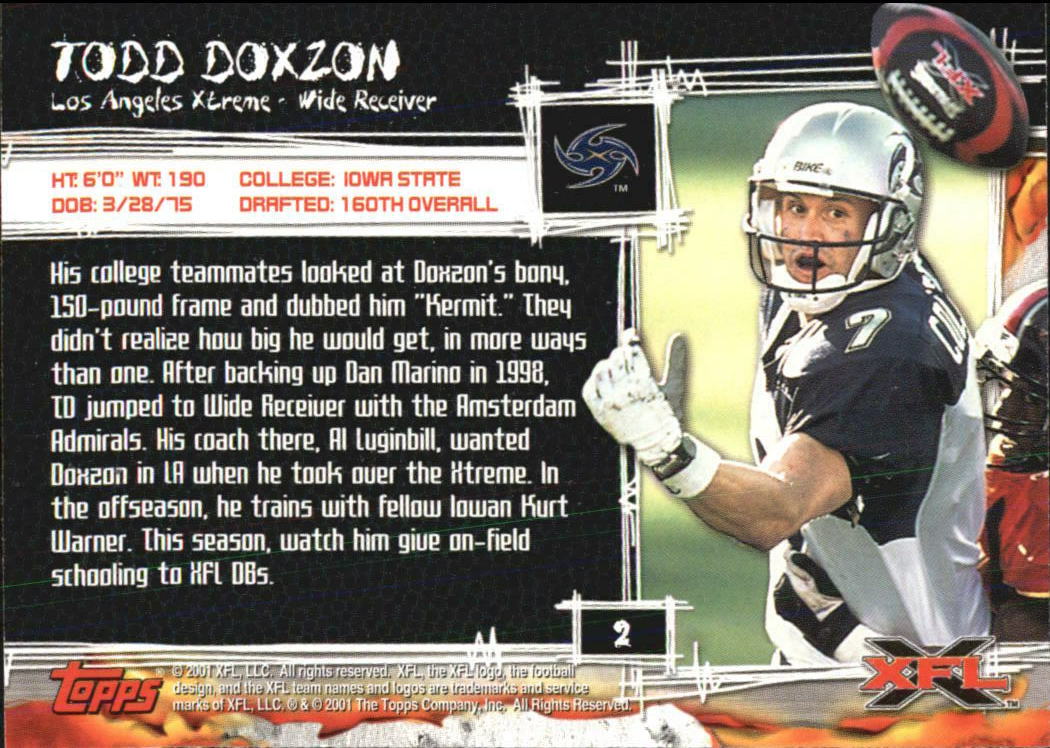 Doxzon, the 160th Overall pick in the XFL Draft (Round 20, Pick 8) made LA Xtreme history by winning the first scramble in their franchise history.

From the 2006 Iowa State Football media guide, “Todd Doxzon is the only Cyclone to play in four different professional football leagues. He played for the Miami Dolphins (NFL) and Amsterdam Admirals (NFL Europe) in 1998, the Los Angeles Xtreme (XFL) in 2001, the New York Dragons (Arena) and the Carolina Cobras (Arena).”

The 1995 Register Signing Day graphic shared that the 6’3” 360 pound lineman could dunk. Augafa, who was born in Kahuku, Hawaii, played high school ball in Anchorage, Alaska.

He, along with Kohn, appeared in both the Hula Bowl and the Blue-Gray Game.

Professionally, Augafa played for the Frankfurt Galaxy, made the practice roster for the Eagles and made the preseason roster for both the Chiefs and the Redskins. (The picture below is from 1998)

Bonus Augafa content: His son, Justice, is the leading punt returner for Hawai’i this season.

While at Iowa State, Jamie scored 217 points, with 111 of those coming off of field goals.

His career long field goal came against Kansas on Senior Day in 1998. With 7:25 left in the second quarter, Kohl connected from 54 on a windy Saturday.

Kohl played his first preseason NFL game on August 19, 1999, Jerry Rice, as seen below, only had one catch for seven yards. Kohl, with his new #4, outscored Rice on the day with a singular PAT with 10:12 left in the game.

Nine days later, Kohl kicked another PAT, this time with 12:36 left in Seattle’s 41-7 plucking of the Cardinals.