Strong Winds, Stronger People: An Essay on an Unforgettable Storm

An Iowan’s thoughts on picking up the pieces and picking up each other.

Share All sharing options for: Strong Winds, Stronger People: An Essay on an Unforgettable Storm

There has never been a Monday across the span of time that did not require at least one cup of ‘joe to get through.

That thought coursed through my head on Monday, August 10th as I stopped for coffee at the Scooters in Boone, a stop which would make me marginally late for a meeting that I was running.

Monday was a big day for me. It was my first agronomic product training (a fancy term for talking about new corn hybrids) with my new work territory. If you haven’t figured out by now, and you should have based on the torrent of agricultural-related Tweets I flood your timeline with, I work in agriculture as an Agronomist, a role that is part advisor, part investigator, and part scientist.

As our group stood worked our way a corn plot just outside Ogden, a barely perceptible change in the weather was noticed by farmers who can often feel when rain is coming. The temperature dropped and sky began to darken ominously. By the time our training was finished, the morning sky to the west was so dark that it prompted phones to be hastily pulled from pockets and weather apps to be opened. Standing there, in the field, our group collectively realized that a minuscule chance of rain had rapidly turned into a threatening storm.

We retreated to the relative safety of a machine shed to continue our training, still not paying mind to the gathering storm. As the storm rolled closer the sky quickly darkened. Standing so near to something so powerful was an awesome experience. The sky whirled from blue to gray to black to green and back as we were standing on the edge of a spinning kaleidoscope. The wind whipped up currents of dust as it blew, and trees danced in the wind.

While I was on the relative edge of the storm that day, what I watched out the shed windows is something that will be difficult to remove from memory. Trees were uprooted, debris blew through the air, and anything not fastened down took flight.

And in a flash everything was quiet. 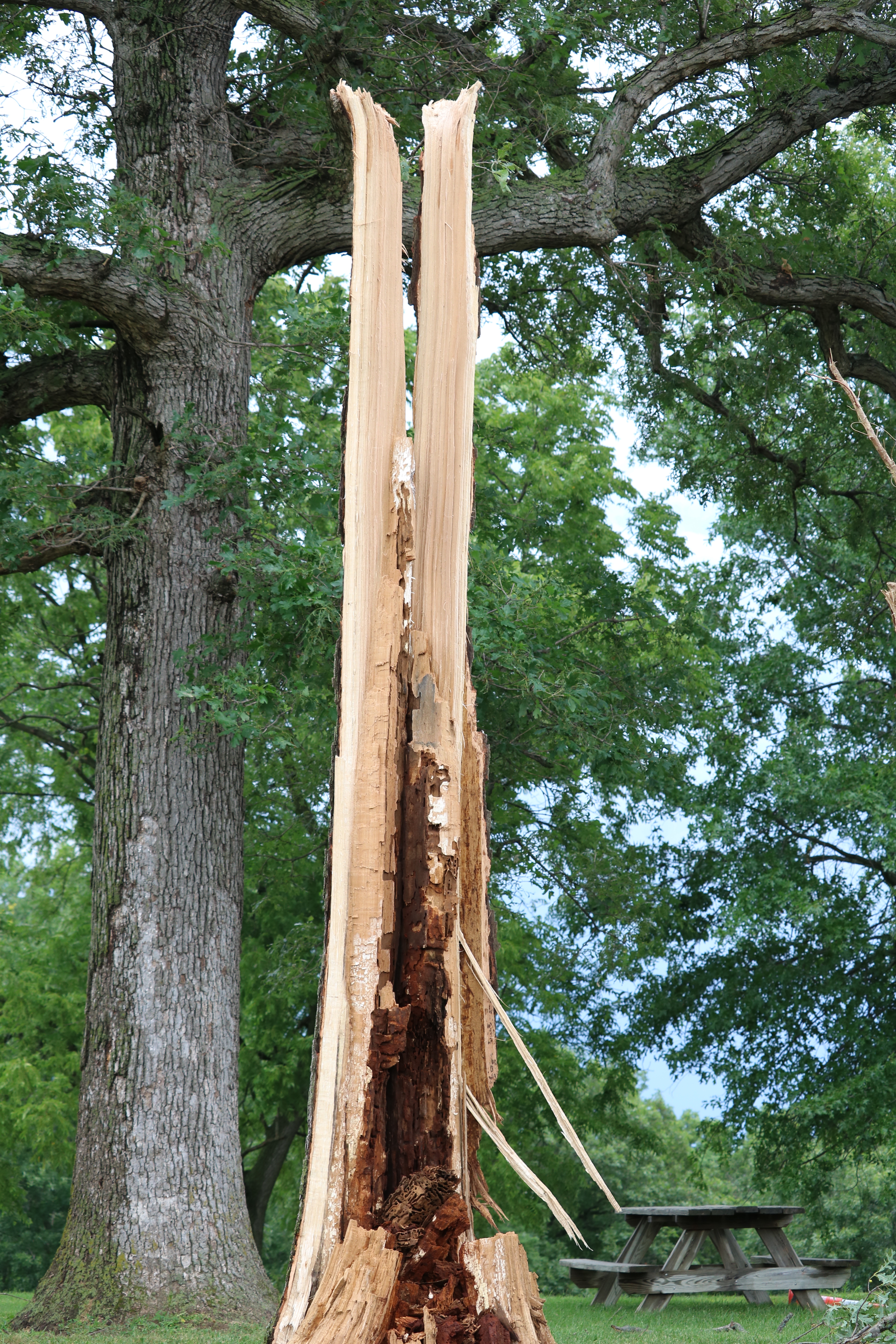 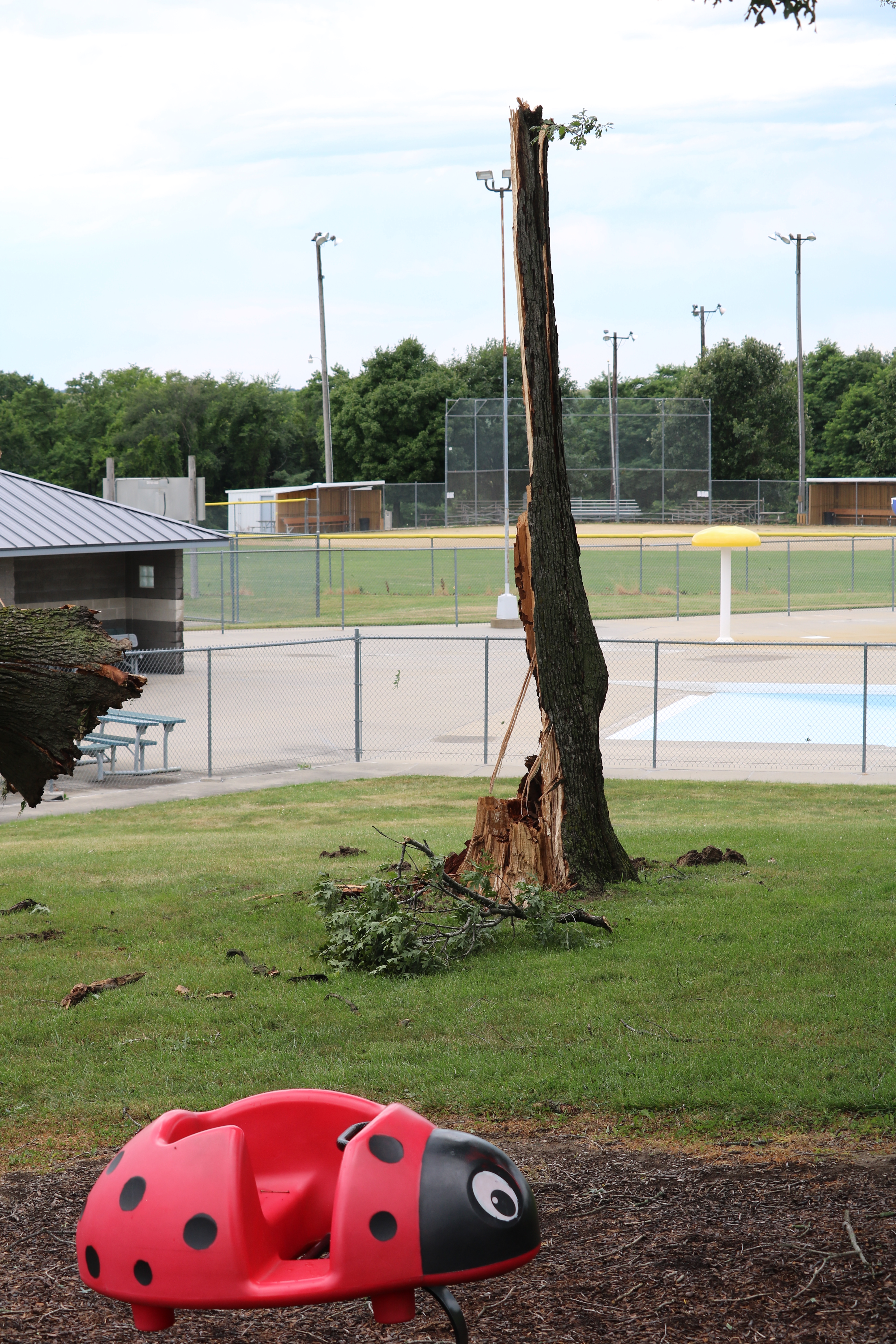 Stepping outside, we were surprised at the amount of damage. The surrounding buildings were still standing and relatively undamaged and apart from downed crops, everything looked relatively unscathed.

Sometime later I hopped in my truck and made my way home. As I neared the exit for Highway 17, the damage started to intensify.

My first real encounter with the storm happened as I drove south towards Madrid. It was a moment that, looking back on, was indicative of how we live in the year 2020.

Driving down the road, I noticed a semi truck laid over on its side in the ditch just north of Luther, and my first reaction was capture the image with my phone. The reaction to pull out my phone happened instantaneously. As I came to a stop in a line of cars, angling for a photo out the window, I noticed the truck had its flashers on, and began to wonder when it had happened.

Before I could take a picture, men in the vehicles in front of me appeared, running towards the downed vehicle. I jumped out and join them, and we searched for the driver to no avail. It was my first timer being around an accident up close, and the eeriness of it was shocking. Broken glass, pop bottles, candy bar wrappers, and personal items strewn about an empty cab is not a scene you want to happen upon.

I still honestly don’t know what happened to the driver. We all assumed he made it safely to the house down the road.

The lesson here is that, in our age of social media, we are all trained to “shoot first and ask questions later” when it comes to something like this. Instead of helping, our reaction is to capture the image to show how bad something is or looks.

My trip home was held up by downed powerlines south of Luther. Detouring west onto a random gravel, I attempted to track my way south. After a few miles, downed trees blocked my way. Pulling into a farm driveway, I noticed a woman walking towards the neighboring house. This area was heavily damaged by the storm; trees down everywhere, grain bins destroyed, homes missing parts of their roofs. I asked if she was alright, and she responded that she was, but was headed to check on her mother, who lived in the adjacent house. I offered to help, and she accepted.

Now I can’t lie, this part of my day felt like a scene straight out of the movie Twister

The house in question was covered in fallen trees, one of which had a trampoline stuck in the top of it. She went in to check on her mom but came out empty handed and looking a bit frantic. We began to look for her, and quickly found her doing what any of us would be doing: walking around her back yard taking photos of the damage, completely unharmed.

It took a good 30 minutes to remove the branches from the road before I could continue home. Eventually I made it back to 17, only to be denied in my quest to get south once again due to broken power lines. These power lines were broken 30 feet above the ground, snapped by the wind as a giant would snap a matchstick.

The drive home was a memorable one: more homes without roofs, sheds collapsed on the machinery within them, and debris everywhere. The scene in Madrid was more of the same, only more so.

Dwelling on the damage isn’t something that is needed here. We’ve all seen the pictures, the posts, the news footage. Madrid was hit especially hard, as winds as high as 130 mph were estimated to have blown through the Highway 141 corridor west of Perry.

While we had some damage to our home, we felt relatively lucky considering all those who suffered damage to their homes and livelihoods. Not having power for two days, nor internet for two weeks, was an inconvenience, but nothing serious considering people in Iowa still do not have power. The scariest part of this experience for me was not being able to get a hold of my family during the storm due to disrupted cell service, as well as having to find a place to stay, as not having power with a month-old baby is problematic to say the least.

But enough about what we lost.

What did we, Iowans, find in the aftermath of this storm?

I was forced to meet my neighbors for the first time as we helped clear the main road through town. Neighbors whom we have lived next to for nearly a year without knowing them from Adam. We helped each other out in our time of need. That story is still being played out by compassionate people across Iowa who are donating time, talent, and treasure to help those in need.

We also found out that the media has bigger fish to fry when it comes to good old Iowa.

In this crazy time, there are seemingly endless disasters to cover at any given time, and we all understand that. But the lack of response was telling, and sadly unsurprising. The media descends on our fine state once every four years when politics are on their mind and ignore us in the interim.

We also, sadly, found out how ill-prepared our modern times have made us for an old-school disaster.

It took time for generators to be found, chainsaws to be scrounged, and for many of the necessities we rarely consider to be restored. In some places, internet and power have still not been restored. Cell phone service and internet in the affected area is still essentially nonexistent, which is especially problematic for us millennial’s who scoff at the idea of having a landline and all of us forced to work from home due to the global pandemic.

And through social media, we also learned that some people are so devoid of compassion that they will use a disaster as an opportunity to push their political agenda.

If you felt the need to criticize the response of state leadership to a storm that made communication and travel to the affected area impossible for nearly a week, was equivalent of a tornado hitting every town and rural building in a band that stretched across nearly half the state, and caused years’ worth of damage in 25 minutes, you should spend some time evaluating your life’s priorities. And if you decided that farmers deserve no sympathy because they have crop insurance, well. I’m afraid you cannot be helped.

The devastation left by this storm is still difficult to comprehend nearly two weeks later. While trees are being cleaned up, roofs are being replaced, and buildings are being repaired, the effects of this Derecho will be long lasting for many. Many lost homes, business, their crops, and several people tragically lost their lives.

My family is just fine. We have a new roof, and our neighborhood is slowly moving down the path to normalcy. My heart goes out to Iowa farmers, who lost a promising crop, equipment, buildings, and the fruits of their season-long labor.

While it will take time for us to pick up the pieces left behind by this tragic storm, we can all continue to help pick each other up. We can continue to be good friends and caring neighbors. Our time and talent can still be donated to those in need in places like Cedar Rapids or Marshalltown. There are many ways to contribute to the recovery effort, and I strongly encourage you to lend a hand.

The winds of this storm were strong, but I think we’ve all learned that Iowans are even stronger.