Share All sharing options for: Going the distance with NFL rookie Landen Akers

For the first time since A.J. Klein in 2016, there is a Cyclone on a Super Bowl team.

Landen Akers, who spent six seasons with Iowa State as a gray shirt, redshirt, and eventual scholarship is a practice squad member for the 2022 NFC Champion (and Super Bowl hosts) Los Angeles Rams.

“It’s been crazy. It’s been surreal some of the guys I’ve been able to be around and learn from,” Akers said. “It’s been a really long season, but it’s a lot more fun than college football because you’re professionals now they treat you like grown men, you’re not watched every second. In college, there are a lot of younger guys that need to be taken care of and stuff like that. It’s fun to be a professional now and do what you want and not worry about school.”

Akers has some good company in the wide receiver room at the Rams with both Odell Beckham Jr. and 2021 AP Offensive Player of the Year Cooper Kupp.

“I kind of realized what it takes to be the best,” Akers said. “Cooper Kupp is the best receiver in the league, I believe, and Odell is one of the best receivers too, so you see day-in and day-out what they do to get to that point. It’s not overnight, it’s every day. They’re here every morning really early with the quarterback watching film. So I’m glad I’ve been able to get with them and learn from them.”

Similar to Kupp and Beckham Jr., Akers did more than just football in high school.

Akers was involved in three sports during his time at Cedar Rapids Washington (stats are from his senior year), football, track, and baseball.

In football, he returned a kickoff 95 yards for a touchdown in the state title game against Dowling Catholic. On the track he finished third in the Class 4A 400-meter dash (48.91), and in baseball Akers had a team high two home runs and a batting average of .353 in 119 at bats.

“I think that’s really second-quarter important how I’ve learned stuff from every sport,” Akers said. “Like playing centerfield, being back there on punt return or kick return. It’s just tracking balls. Every sport applies to another sport.”

When Akers was a kid, his NFL preferences gravitated to the teams that currently have former Cyclones David Montgomery and Michael Jacobson on their rosters.

“I wasn’t the biggest fan [of the NFL], but the team I followed was the Bears, and then the Colts a little bit,” Akers said. “More so the Bears because it’s one of the closest teams to Iowa besides Minnesota and Kansas City, they used to be pretty good when I was in high school.”

If the Rams are victorious tonight, Landen Akers will join Dedric Ward will be the only two Cedar Rapids Washington graduates with a Super Bowl ring.

“It’d be crazy for our community, there’s only a handful of us to play in the NFL from Cedar Rapids Washington,” Akers said. “I know the football hasn’t been as good in the past year’s low enrollment and all that so hopefully getting to this point will push some kids to play football and get out there and know that it’s possible to get to this level.”

Akers, who was recruited by coaches Todd Sturdy and Tommy Mangino, came to Iowa State as a grayshirt. Iowa pursued the Cedar Rapids Washington Warrior as a walk-on.

“Coach Sturdy and Coach Rhoads and the offense really got me to go there, they run three receivers and all that stuff,” Akers said. “At Iowa, I could’ve walked on there, but going to Iowa State and getting a grayshirt offer was a much better scenario for me. I wanted to be a receiver so I think that was a better offense to go to.”

Coach Rhoads and Iowa State parted ways before Akers ever had a chance to play for him, so, Landen had to meet an entirely new coaching staff (except Lou Ayeni) before he ever took the field.

“They [Campbell and co.] just seemed like a class act,” Akers said. “First day, I went to the facility I met with coach Campbell and my receivers coach, Coach Gasser. They just seemed like they were trying to get things in the right direction and I thought I could stick around and help out. I wasn’t the highest recruit or anything.”

Akers earned a degree from both the Ivy College of Business and the College of Human Sciences: a Bachelor of Science in finance in summer 2019 and a Masters of Family and Consumer Sciences (Family Financial Planning) in spring 2021.

Also along the way of Akers’ adventure at Iowa State, Landen gained friendships with his football teammates that are still present to this day.

“I wasn’t part of LD3, that was Allen and Allen’s class,” Akers said. “So me and the other guys we were kind of the ‘Show Ponies’ . That’s what we went by. Mike Warren, Carson Epps, Kene Nwangwu, Jalen Martin, we still keep up with each other and talk.” 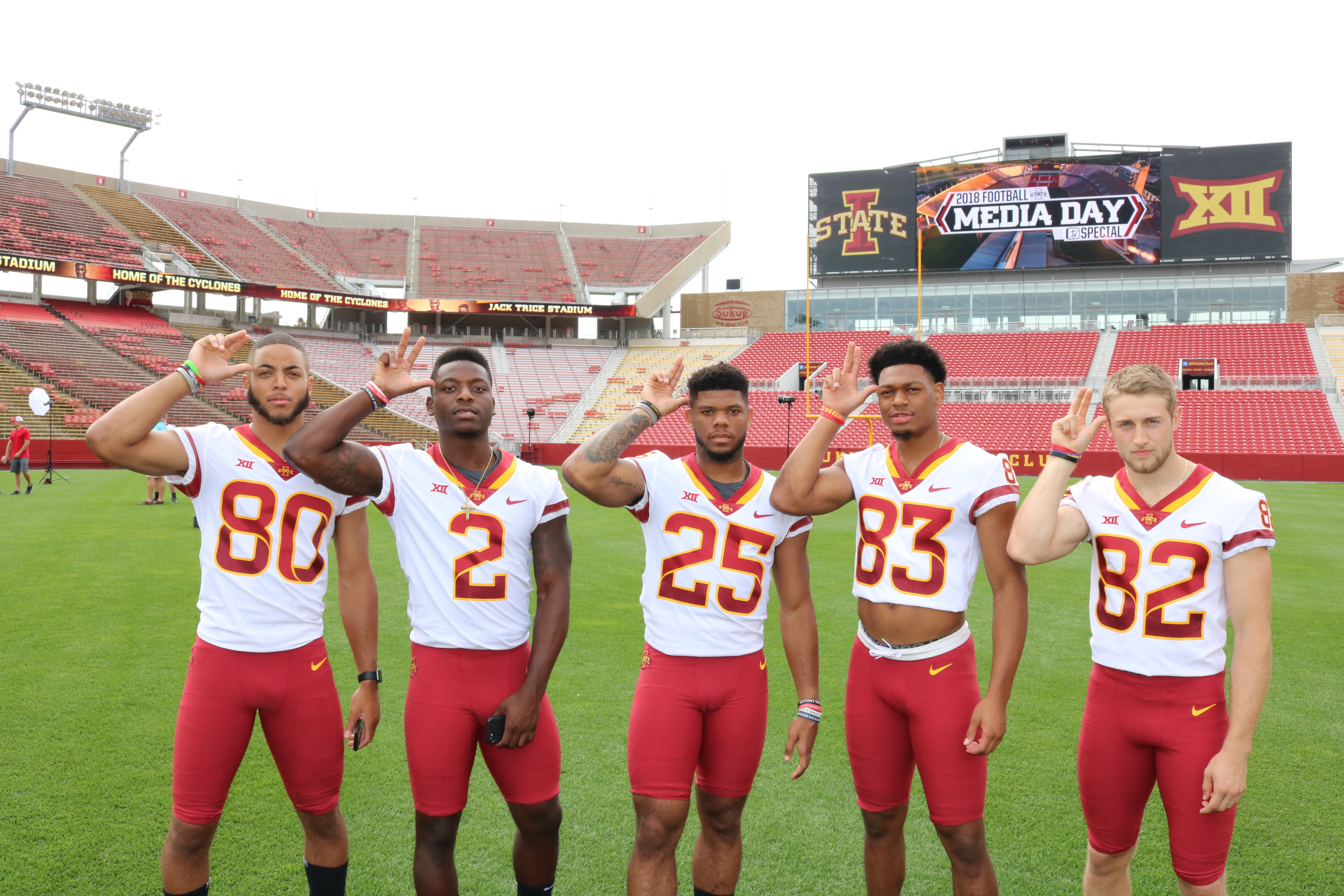 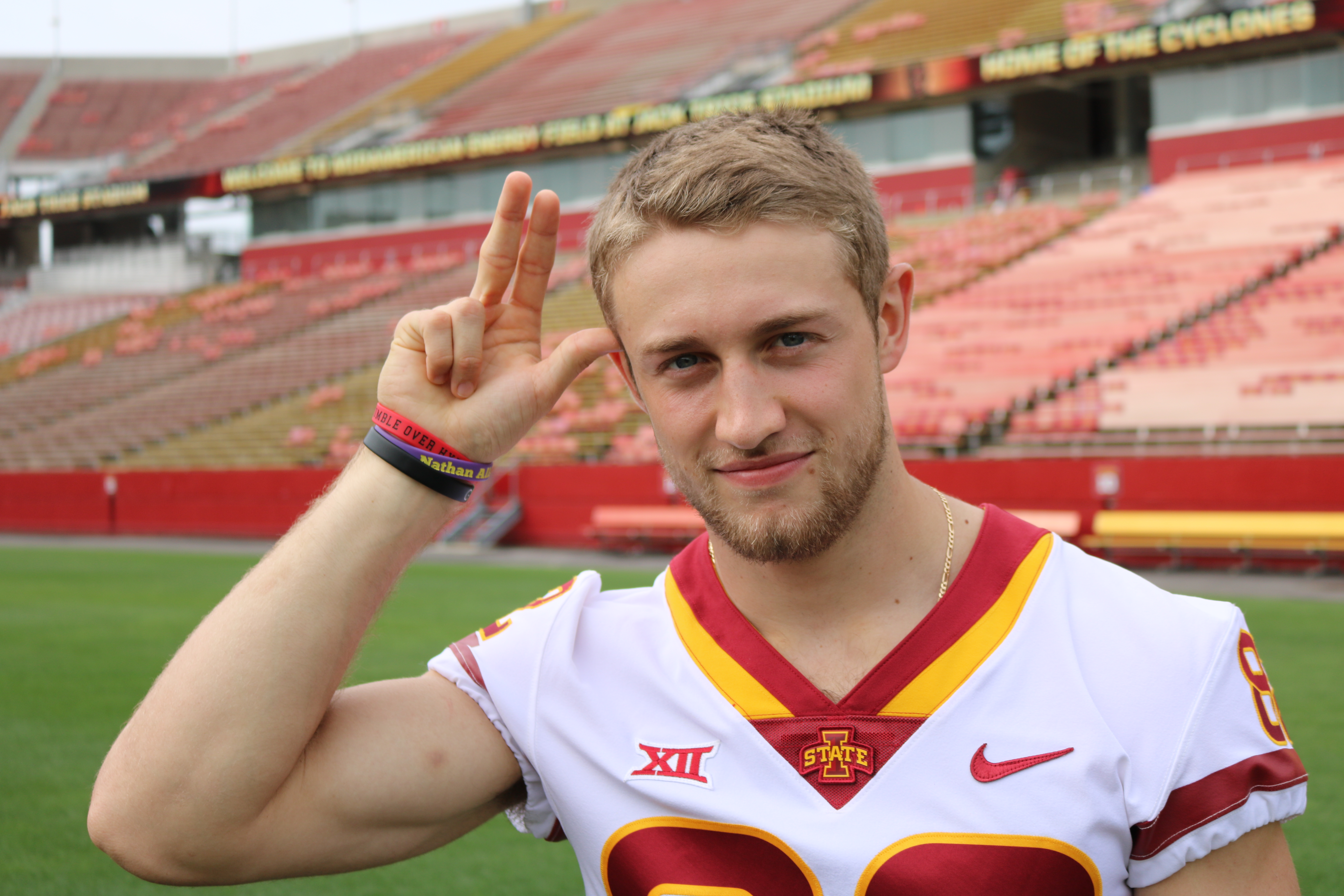 In addition to making friendships and earning degrees, Akers also made memories about being part of the teams that changed the culture at Iowa State.

“The first game we beat Oklahoma in Norman with my roommate Kyle Kempt who was the one that kind of stepped up,” Akers recalled. “I didn’t have a giant part in the game. I was a kickoff returner and I don’t think I took a kick out, but I was still there and on the field. Again that year against TCU, we beat them when they were ranked fourth in the nation and those first few games we won were very important.”

“To cap off my senior year, one of the biggest and best memories, was playing in the PlayStation Fiesta Bowl and actually winning that and getting the ring,” Akers said. “As a senior, that’s really big.” 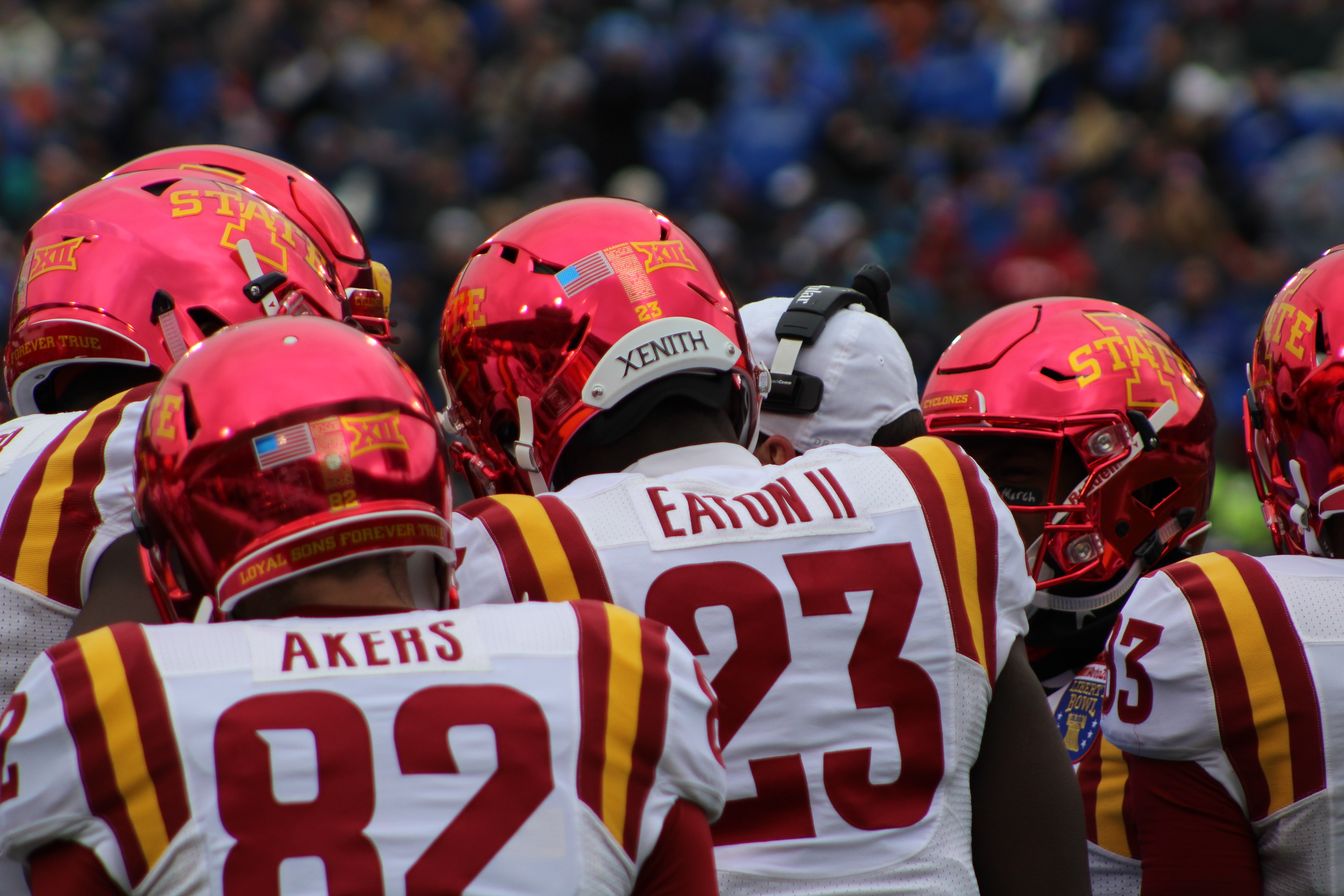 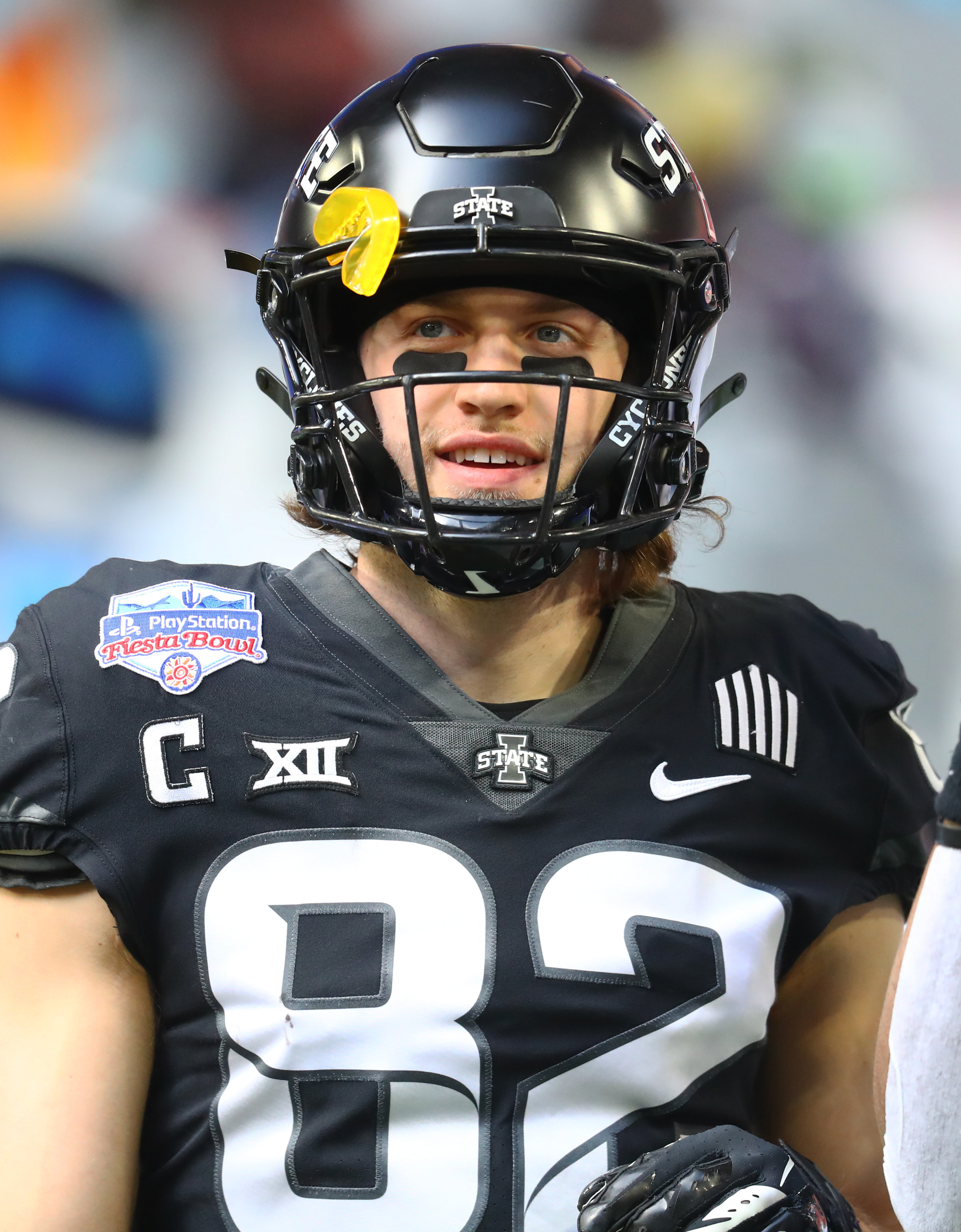 Landen Akers is the 15th Cyclone to appear on a Super Bowl team.

“It’s crazy If you would’ve told me that at the beginning of the year, or last year, I don’t think I or anyone else would’ve believed you,” Akers said. “It’s kind of a long shot for me so I’m glad I’ve been able to stick around and do my part for this team.”