Can Abdel "Darth" Nader emerge as the hero the Cyclones need? Or will the Dark Side prevail...

Share All sharing options for: Darth Nader: A New Hope

This story is a tale of struggle, a struggle that takes place both in the battlefields of the Big 12 galaxy, and in the mind of one very powerful individual. One who possesses the ability to change the balance of power, and put an end to the tyrannical reign of the Jayhawk Empire.

Abdel Nader was born and raised on the desert planet Egypt Tatooine, though he longed to leave those barren wastelands and venture out into the galaxy. As soon as he was old enough, he stowed away on a service transport which landed him at Dekalb outpost. He spent two solar cycles there working hard to learn his craft, but in his heart he still longed for more.

This constant yearning (set to this music), and a feeling he couldn't explain, led him to join up with the Big 12 Resistance at Hilton Base on planet Hoth. He became an instant hero after coming across a group of supporters freezing to death in the icy wastes while waiting for admittance into Hilton Base, and sliced open a wild Mangino with his lightsaber so he could stuff them inside the bloated carcass to keep them warm enough to stay alive.

The rebel commander at the time, Jedi Master Hoiberg, was excited about adding such a skilled fighter to his arsenal. He was well aware, however, of the dark cloud that loomed over the young and promising Nader. And he could not deny that there had been issues in the past with a young Jedi Master attempting to train a troubled padawan such as Abdel.

While Hoiberg saw to young Nader's training, the Resistance's enemies were starting to take notice. For the galaxy had long been ruled with an iron fist by the evil Jayhawk Empire, led by a Sith Lord by the name of Emperor Self. As Nader trained under Master Hoiberg to use his powers, the Emperor felt something most peculiar... A feeling he hadn't felt in ages...

A disturbance in the Force.

Back on Hoth, Nader was adjusting to life in the Resistance. Though small and rather underpowered, the ragtag Cyclones had emerged as one of the biggest threats to the Jayhawk Empire in eons, and Nader was happy to be a part of a team with such a lofty goal. Jedi Master Hoiberg offered guidance, yet gave Abdel a chance to make his own way.

It was during this extended campaign against the Empire that Nader discovered there was another force shaping his life, an innate presence he knew existed but could never define. For while he would perform well in battle against inferior foes like the lowly Hawkeyes in their neighboring sarlacc pit, or delivered a crushing blow to Jabba the Huggins in his palace at Morgan's Town, at other times he was prone to bouts of ineffectiveness and complete mental lapses during battles.

During this year of ups and downs, Nader discovered that the power of the Force flowed through his body. This knowledge, however, came with a terrible price. While Hoiberg sensed that the Force was strong in Abdel, so did Emperor Self. The ensuing battle that raged in Nader's mind was one he was neither prepared for, nor equipped to weather.

This battle was to be the end of Abdel Nader, and the beginning of Darth Nader. 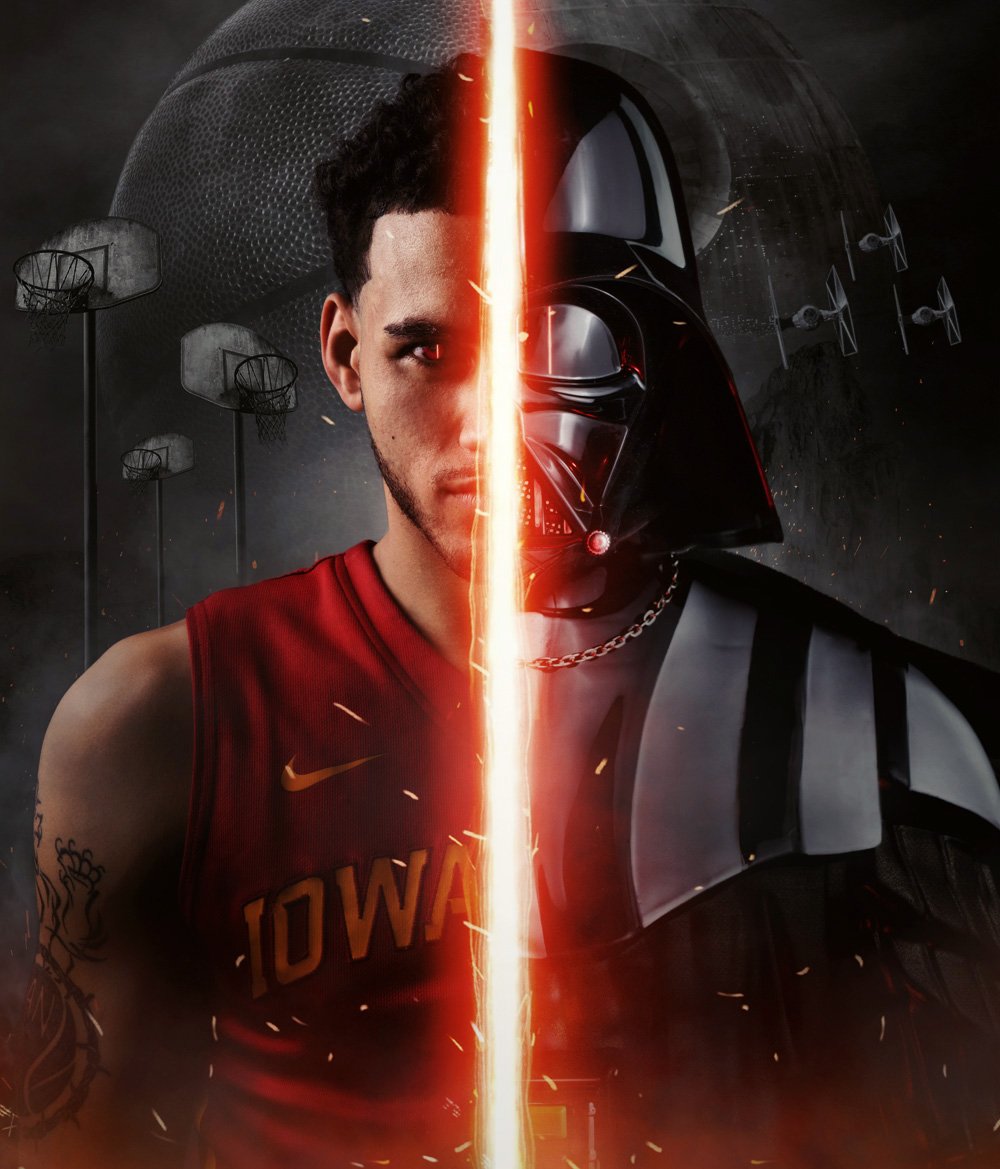 At times, Darth Nader seemingly became two different men... During the heat of battle he would have moments of good and glimpses of bad, as the light and dark sides of the Force wrestled for control. These two forces continued to wrestle for control of his soul, until one night Master Hoiberg was killed by a Krayt Dragon in a surprise attack in the KFC Yum! Cantina.  Grief over his former Master's death nearly drove Darth Nader to the edge, and to the Dark Side for good.

But before long, a new leader was appointed by the Cyclone Resistance, aiming to continue the series of victories the Cyclones had achieved under its former commander. Hailing from the Mon Calmurray System, General Prohm reached out to the troubled Nader, hoping there was still some good to be found in his troubled soul.

Meanwhile the Empire, housed in the stale, mechanical confines of the Death Star Allen Fieldhouse, grew in strength and prominence for yet another year. After having successfully kept the Cyclone Resistance at bay during the previous campaign, Emperor Self was determined to crush the Resistance and their new leader once and for all. He was aware that Nader had returned to join the 'Clones, and was determined to win him over to the Dark Side. Self knew that a focused Nader would be the key to victory for the Resistance, and vowed to personally venture to Ames Base and turn him to the Dark Side.

Despite fighting under a new leader, the Cyclones had returned strong as ever. After continued training with General Prohm, as well as help from Georges Solo and his faithful Wookie companion Nazbacca, it appeared as though the Resistance would prevail in the struggle for Darth Nader. But as the battles added up, and they began challenging the allies of the Empire, it was clear that Nader was still fighting the pull of the Dark Side.

Yes, Darth Nader was still prone to poor performance and unforgivable mental errors. At times he could fire a proton torpedo into a thermal exhaust port less than two meters wide, but other times his shots missed the mark by wide margins, sometimes even by miles. Emperor Self seemed to be winning the battle, and the Cyclones went on a losing streak that threatened their entire mission of dethroning the Jayhawk Empire.

That's when the tide began to turn...

The Empire suffered consecutive defeats at Stillwater Base and Morgan's Town at the hands of Resistance Allies. In the meantime, the Resistance rebounded from devastating defeats, with Darth Nader playing a key role in their victories. General Prohm's strategy was beginning to pay off, and the Cyclones were driving headlong into a showdown with the Emperor's personal fleet.

Yet, the battle for Darth Nader's soul wages on. General Prohm understands the future of the Resistance lies with the skills and talent of Nader, as it is evident the Force is strong with him. As a Big Monday battle looms, which side will prevail? Have General Prohm and the Cyclones finally broken through to Darth Nader? Will he be a leader and the key to toppling the Jayhawk Empire? Or will the evil Emperor Self use Nader to sabotage the Resistance, and keep him from discovering his true self?

Tune in Monday to find out.

May the Force be with you.